Excessive rainfall and flooding often result in the loss of applied and soil-derived nitrogen (N). Nitrate-N is the form of N most likely to be lost from the crop root zone, either to tile drainage and groundwater via leaching or into the atmosphere via denitrification. Ammonium-N is not vulnerable to the same losses when incorporated into the soil.

Most of the N applied to soil is initially in forms other than nitrate. The exception is liquid N (28-0-0 or 32-0-0), of which 25% of the fertilizer product is nitrate-N and the remainder is ammonium-N (25%) and urea-N (50%). Anhydrous ammonia is 100% ammonium-N when it reacts with water in the soil. Manure contains mostly organic- and ammonium-N forms.

Unfortunately, no matter what forms of N are added to the soil, all of them eventually convert to nitrate-N. Time, temperature, soil type, N source, rate, application method and other factors determine how rapidly nitrate-N is formed. It is difficult to estimate the extent of nitrate formation because of the many factors affecting N conversion and their interaction.

It is even more difficult to then estimate how much of the nitrate-N was subsequently lost from the root zone. Soil sampling and measuring the concentration of nitrate- and ammonium-N remaining in the root zone is an alternative to estimating how much N was lost. 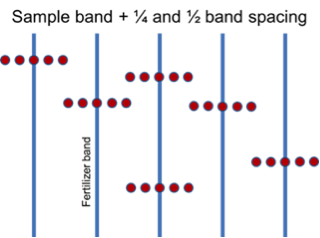 Soil nitrate-N and ammonium-N are quite variable and so obtaining a good representative soil sample requires many cores from relatively small field areas. The depth of sampling recommended is 1 foot in most soils. Consider collecting a separate deeper soil sample from 1-2 feet of soil depth for a more complete assessment of plant-available N, especially in sandy soils where leaching through the soil profile is the predominant form of N loss.

Handling Soil Samples Prior to Delivery to Soil Test Laboratory

Dry or refrigerate the soil samples as soon as possible to stop the soil microbes from altering the N levels. Spread the soil thinly on plastic to air dry and hasten drying with a fan if possible. If you choose to use an oven to dry the soil, keep the temperature below 250 °F. Alternatively refrigerate the samples and keep them cold through shipping to the laboratory.

Most soil testing laboratories offer soil N test analysis services, but contact them first to confirm and ask about any special procedures they recommend.

Ammonium-N is just as available to plants as nitrate-N, but typically little accumulates in the soil because it is readily converted to nitrate under most conditions. However, if N fertilizer was recently applied, there may well yet be some ammonium N available in the soil for plant use.

Significant levels of soil ammonium are most likely if anhydrous ammonia was the N source, a nitrification inhibitor such as nitrapyrin or dicyandiamide (DCD) was used, and/or soil pH was low (below 5.5 ). In these situations, low levels of soil nitrate may indicate little conversion of ammonium to nitrate, rather than simply loss of nitrate.

In our opinion, soil nitrate and ammonium levels can be used to guide additional N applications to fields subjected to saturation and flooding. However, there are admittedly no hard and fast research-based recommendations for this particular situation.

The primary tool for soil N sampling in the Eastern Corn Belt has been the pre-sidedress soil nitrate test (PSNT), which is most applicable as an indicator of N availability in soils where manure had been applied, or a legume such as clover or alfalfa had been plowed down. For these field situations, the level of soil nitrate found is considered an index of N availability, i.e., an indicator of how much N is currently available AND how much N may become available from the manure or organic matter. When used in this context, soil NO3-N levels greater than 25 ppm are thought to be adequate for optimum corn yield without the addition of more fertilizer N.

During the research that developed this soil test, sampling deeper than 1 foot or analyzing for exchangeable NH4-N did not increase the predictive ability of the PSNT enough to warrant the extra effort.

However, when the intent is to assess the loss of N due to rainfall, we suggest that deeper sampling plus analysis for NH4-N content can provide useful information to help growers decide whether additional fertilizer N is merited.

It is important to recognize that in this context, measurements of soil nitrate and ammonium following fertilizer N applications indicate current N availability only, because there is no manure- or legume-derived N to be released later in the season. Considering this fact, the commonly accepted 25 ppm NO3-N critical level for manure- or legume-N fertilized soils may be too low for soils that have only received fertilizer N.

Leaching of soil nitrate is expected with ponding, flooding or soil saturation, but not all of the nitrate will have been moved below the root zone.

A shortcoming of the 1-foot sampling depth is that it does not always reflect plant-available N deeper in the profile, particularly when abnormal leaching occurs. This is why we suggest also sampling from the 1- to 2-foot depth for assessment of soil N availability, particularly in sandy soils.

In our on-going N rate trials conducted throughout the state, the “normal” background levels of soil N in the upper 1 foot of mineral soils typically range from 5-10 ppm NO3-N and 4-8 ppm NH4-N for corn grown in rotation with soybean or corn without manure- or legume-derived N. Typically the deeper 1- to 2-foot soil samples would have slightly lower N levels.

Click here to learn how to make a decision based on soil nitrate and ammonium levels.