By Ruth and Dwayne Beck

A field scale replicated trial testing different fertilizer nitrogen rates on sorghum was conducted in Stanley County during the summer of 2016.

The field selected was soil sampled in March 2016 and soil test nitrate-nitrogen level was determined by a commercial soil testing lab. The soil was calculated to have 13 lbs. of available nitrate-nitrogen in the top two feet of soil. Phosphorus and potassium levels were measured at 7 (Olsen test) and 381 ppm respectively.

In addition to the standard testing procedure, the laboratory also ran the Haney suite of tests. This is a set of procedures developed by Rick Haney. It’s being promoted in some areas as being able to do a better job of predicting fertilizer requirements than traditional testing procedures when no-till and cover-crop techniques are being used. 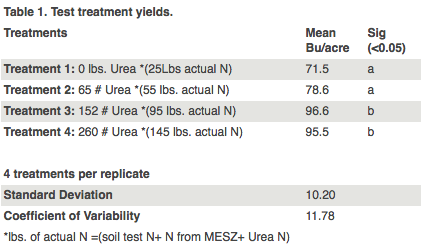 The traditional soil test and SDSU recommendation of 80 pounds of additional nitrogen/acre provided optimum yield in this experiment. It should be pointed out that adding the amount recommended by the Haney procedure did produce nearly the yield goal of 80 bu./acre, but it did not optimize yield in the SD environment in 2016. It may need additional calibration to match local conditions.

Urea cost was $370/ton or $0.40/lb. actual nitrogen. The sorghum was sold for $2.75/bushel. The extra yield of 18 bushels per acre, which was produced in treatment 3 with the addition of approximately 40 pounds of nitrogen increased gross income by $49.50/acre.

Conclusions above are based on one site and one year of data.