Unlike the last two springs when planting rates for all crops were well ahead of average, the area planted this spring lags behind the average in North Dakota. Soil and air temperatures were way below average last week. Moreover, excessive soils has also been a deterrent to planting in much of the state.

Research has shown that the optimum period for planting corn in North Dakota, regardless of the region of the state, is during the first two weeks of May. However, planting corn into cold soils may not be the best idea even if the calendar suggests it is the recommended time for planting.

Corn requires soil temperatures above 50 F before it will begin to grow, even though there is adequate soil moisture for germination. Furthermore, corn requires an accumulation of about 125 growing degree-days (GDDs) before it emerges (this relationship is more predictive if soil temperature is used in calculating GDDs rather than the air temperature).

Corn seedlings that take longer to emerge because of cold soils are exposed to greater risk of seedling diseases and are more likely to have greater variability in emergence dates. Poor uniformity in emergence can affect yield, as corn that emerges late usually carries a yield penalty, as they are never able to catch up in size to their earlier emerging neighbors.

Another risk of planning into cold soils is the possibility of imbibitional chilling injury. This occurs when the corn seed imbibes water that is colder than 50 F. The colder the water the greater the risk of this type of injury. Cell membranes in the seed can rupture at low temperatures, causing cell contents to leak, providing a good source of food for pathogens. In addition to poor stands, cold injury may cause the mesocotyl to corkscrew or the coleoptile and true leaves to emerge from side of coleoptile. 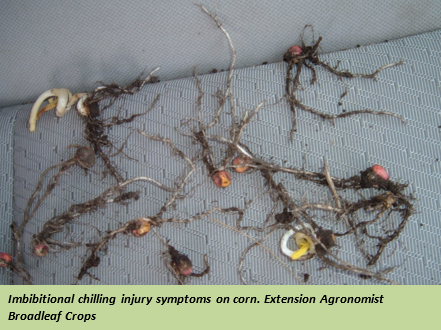 Plants that developed from these seedlings may be stunted and have distorted leaves and will develop more slowly than normal plants. Sometimes these injured seeds will produce a radicle but not a coleoptile. The accompanying picture captures some of these symptoms. The worst case scenario as far as imbibitional chilling injury is concerned is when corn is planted into a relatively cold soil that then receives a cold rain or snow event shortly after planting.

A heavy, cold rain after planting seems to increase the chances of imbibitional injury because it overwhelms the ability of the soil to warm the water before it reaches the seed. This may be something that you should consider if the cold weather we experienced last week returns to the region before all of the your corn is planted. For the moment, soil temperatures are near 50 F and rising, so the risk of this type of injury should will not be a concern, and planting during the recommended period of early May makes good agronomic sense (soil moisture permitting).