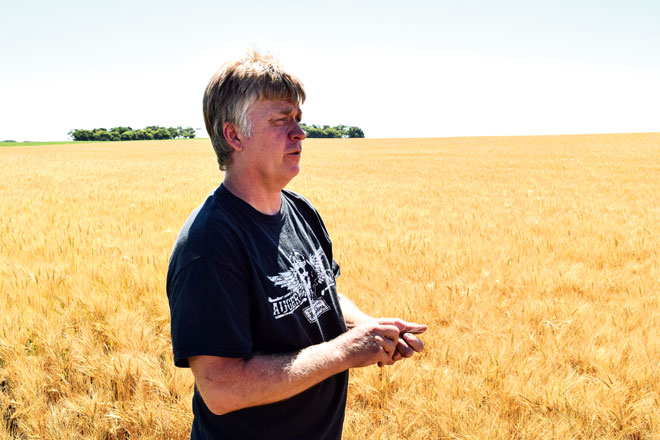 Reducing soil disturbance and rotating crops and covers has reduced evaporation and helped the Neva family work through saline soils and other farming challenges.

Pictured Above: FIELDS COVERED. Randy Neva checks the no-tilled spring wheat crop on his family’s farm between Bismarck and Fargo in North Dakota. Randy, his brother Tim and father James, say water infiltration and soil structure have markedly improved since switching to no-till more than a decade ago

Since switching to no-till practices more than a decade ago, dealing with rocky, variable and saline soils has been much easier for the Neva family.

After buying their first John Deere no-till drill, they gradually moved away from fall chisel plowing and eventually went 100% no-till.

“Back decades ago, the government used to mandate the percentage of acres to be summer fallowed so we tilled and picked rocks. With no-till we don’t pull any rocks up,” says Randy Neva, who is equal partners in the operation with brother Tim and father James, while Tim’s son, Connor, also assists.

“My sprayer will go over the ground before anybody that tills will. We’ve done so little rutting in our fields it’s amazing. Even after an inch of rain, the ground will hold.”

The Nevas no-till 4,500 acres of soybeans, spring wheat and corn near Kensal, N.D., and they also run a 250-head cow-calf operation with purebred Simmental cows that take up another 1,500 acres of pasture.

Their rotation is typically wheat or corn, followed by 2 years of soybeans, then back to wheat or corn. Soybean is the predominant crop, but wheat and corn play an important role in keeping residue…

Coming Soon To A No-Till Field Near You