By John Dobberstein posted on May 1, 2013 | Posted in Equipment, Nutrient Management, Soil Health

After jumping into no-till practices more than 2 decades ago, Iowa no-tiller Randy Caviness has been rewarded with more fertile soils, earlier planting and a stronger balance sheet to compete with neighbors.

Even as no-till was growing during the 1980s, Randy Caviness wasn’t completely convinced about the practice. He worried about weed control, and he hadn’t seen many examples of no-tilled crops working very well in his area.

But the 1985 Farm Bill was the prod he needed. To meet conservation requirements, Caviness had to either enroll his highly erodible acres in no-till, or establish a forage crop into his rotation. His cows were already sold off, so he jumped into no-till. 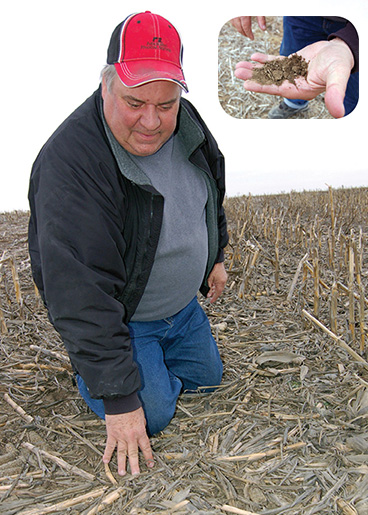 Caviness hasn’t looked back since. His farm has been 100% no-till since the mid-1980s. Since yields are reaching or exceeding county averages, he plans to keep it that way.

Caviness, his father and 16-year-old son farm about 4,350 acres of corn and soybeans near Greenfield in western Iowa. Caviness started farming in 1977 and bought his first 160 acres from his father in 1980.

Before switching to no-till, Caviness’ farm was a minimum-tillage operation.

“We worked the ground two or three times, discing in the fall and working it twice more in the spring so we knocked the weeds out,” he says. “But the ground was totally susceptible when nothing was being grown on it. We would get something like a 2-inch rain, the waterways would form in the fields and we would be losing soil.”

Back in the mid-1970s, Buffalo planters were emerging that could plant into sod where conventional planters could not.

“But for weed control, they had a big cultivator with a great big shovel…