Postponing P and K Applications May Save Money

Phosphorus (P), potassium (K) and sulfur are essential plant nutrients and, if soil levels are limited, must be adequately supplied to crops to ensure optimal yield. Adding fertilizer containing these nutrients, as well as nitrogen (N), iron, zinc, and occasionally boron, is sometimes necessary for optimal yield for Nebraska crops. For P, K and zinc, soil testing is the best way to determine if the availability of these nutrients is low enough to require fertilization.

Research has shown that the most profitable approach to using these fertilizers over the short term is the sufficiency approach rather than a crop removal approach. The sufficiency approach is often described as "fertilize the crop" vs. the "fertilize the soil" crop removal approach. When soil test levels for a specific nutrient exceed the critical level, it is not profitable to apply that nutrient for that crop year. Soil test critical levels — the test concentration above which no fertilizer is recommended — vary with the test procedure and crop. Response levels are summarized in Tables 1 and 2.

At lower soil test values, the recommended rates of fertilizer increase. Increased yield levels are removing more nutrients per year, so soil depletion rates may be faster than in the past. Recently we changed our recommendation procedures to recommend some additional P before the critical level is reached. Based on yield maps and grid soil sampling, maintaining fields above the critical level should be the goal. If a field is at or above the critical level, it is likely that P fertilization can be postponed for 1 or 2 years without losing yield potential.

Unlike with P, K does not build up quickly in the soil since its accumulation depends on soil physical properties and some K is leached when there is water drainage through the profile. Its depletion rate is slower than that of P since many Nebraska soils contain clay, which releases K slowly.

Few responses of wheat or soybean to sulfur fertilization have been documented in Nebraska. Experience has shown that some fine-textured soils in eastern Nebraska under high residue conditions in wet, cool springs will exhibit sulfur deficiency symptoms. Application of 15 pounds sulfur may avoid these symptoms, but may not increase yields.

Nutrient Management for Agronomic Crops in Nebraska (EC155) provides a guide to using nutrients for the production of Nebraska's major agronomic crops. This book is divided into two topics: basic principles of soil fertility and fertilizer recommendations for individual crops.

Crop removal values noted in this article are from EC155. Fertilizer costs are based on fall 2016 estimates for anhydrous ammonia ($415 per ton), monammonium phosphate ($420 per ton), potassium chloride ($310 per ton), and ammonium sulfate ($370 per ton). Fertilizer prices will change over time and vary by region.

The probability of yield increase is low if soil test levels for these nutrients are above the critical levels. Consequently, not applying these fertilizers, based on crop removal, when soil nutrient availability is adequate can save $52.12 per acre (Table 3).

The sufficiency approach for P, K and sulfur management allows for significant savings in short-term fertilizer costs. With this approach, nutrient application is not recommended when the soil test level exceeds the critical level as the probability of yield response is low. With the crop nutrient removal approach, an additional $52.12 of nutrients per acre would be applied for situations of adequate nutrient availability and 200 bushels per acre acre corn yield. 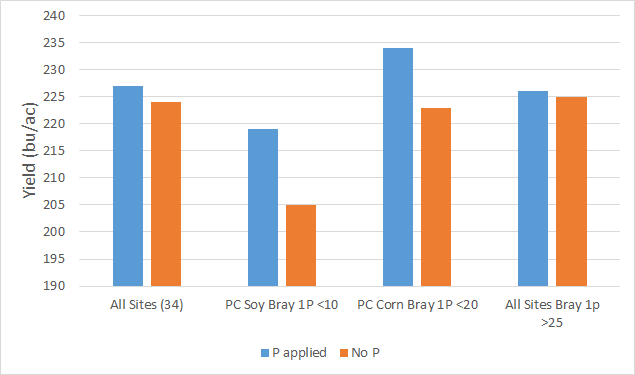 Figure 1. Effect of previous crop (PC) and Bray #1P on corn yield.
Results from field studies across Nebraska in 2002 -04 (Figure 1) illustrate the type of yield increases one might expect with P fertilization (blue bars, 40 pounds P2O5 per acre). Over all sites there was a 3-bushel-per-acre increase with P applied, but when the soil tests were low — under 10 Bray 1P — and following soybeans, there was a significant yield increase of 14 bushels per acre due to P application.

When corn followed corn (Bray P less than 20 ppm), there was an 11 bushel-per-acre difference in yield between fertilized and non-fertilized. All but two of these locations had average yields greater than 200 bushels per acre. For K (data not shown) of the 34 sites, one had a yield increase and one a yield decrease with K fertilization (43 pounds K2O per acre), with soil K levels ranging from less than 100 ppm to over 600 ppm K.

(This article was revised from a December 18, 2008 CropWatch article.)