He’s 28-years-old, doesn’t own a single acre of land and farms using principles that are virtually unheard of in northeastern Colorado.

So why are landlords entrusting John Heermann with 1,600 acres of their land?

Heermann offers this explanation: “By improving their soil and improving the land that they own, I’m putting money in their pocket essentially by increasing the value of their land.”

Despite the fact that his farming principles are unconventional for this part of the country, Heermann said landlords are increasingly realizing the value of improving the health of their soil.

But Heermann, himself, only recently discovered the untapped potential of soil health. After he graduated from the University of Nebraska with an Ag Economics degree, he came back to the farm where he grew up and farmed with his father for another 5 years. During that time, he started attending workshops and learning from other farmers like soil health advocate Gabe Brown.

What he witnessed at one of those workshops, presented by the NRCS, completely transformed his farming philosophy.

“Watching the NRCS rainfall simulator in action is what turned me 180 degrees,” he says. “Seeing how water would not infiltrate in a conventionally tilled or even a no-till soil with no ground cover was eye-opening. In my area where we get 17 inches of average rainfall, water is one of the most limiting factors. So if I can do anything with my farming practices to capture more moisture or utilize that moisture more efficiently, ultimately I will have better yields and a better bottom line.”

Now farming on his own, Heermann is using an approach that’s completely rooted in improving soil health. 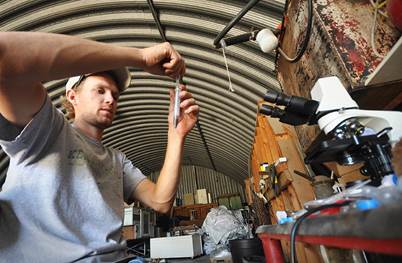 While the Quonset shop on John Heermann's farm is replete with typical farming tools, seed sacks and supplies, there's one piece of unconventional, but often-used equipment, that rests on a bench along the shop wall — a microscope, which Heermann uses to monitor his "underground livestock."

“We have been trying to farm growing things in ‘dirt’ and I think we need to change that attitude and look at the soil as what it is — a living ecosystem,” he says. “If you don’t have anything growing out there, you’re not feeding your soil biology.”

To more fully enable that soil biology, Heermann has transitioned to no-till plus diverse cover crops and rotations, which keeps living roots in the soil year-round, feeding the microbes that feed his plants.

“Every farmer has livestock,” Heermann says. “It’s just some of us might not have livestock with four legs. We all have livestock underground. But if you’re not growing anything on your fields, then you are not feeding your livestock a diverse diet. That is where cover crops come into play.”

By using cover crops, Heermann has also been able to improve soil aggregation and structure to capture and retain more of the precious precipitation falling throughout the year.

“By improving soil structure, I can actually use the precipitation that falls,” he says. “It doesn’t matter what your precipitation average is, or your total is, if half of that runs off and is in the corner of your field, or in the ditch.”

The resulting improvement in water infiltration has resulted in an immediate pay-off for both Heermann and his landlords.

“Before the landlords were only seeing a crop once every 2 years, whereas through this continuous system, they are getting a crop off all their acres every year, so there is a bump of income as well,” Heermann explains.

But farming using no-till, cover crops and diverse cropping rotations in a 17-inch precipitation zone is not without its challenges and its risks, so Heermann is continuously educating his landlords about what he’s doing and why he’s doing it. 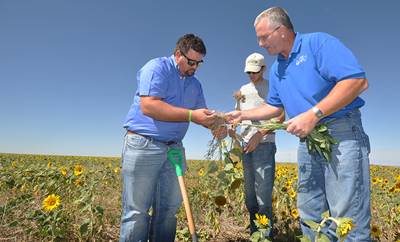 NRCS District Conservationist Daniel Palic (right) and Soil Conservation Technician Tim Becker (left) are among a number of soil health advocates whom Heermann shares his ideas, practices and results from his farming operation with.

“Some of my landlords live off the farm and others never lived on the farm, but they are really open to the idea [of improving soil health],” he says. “For all of them, I just try to educate them and give them tidbits on what I’m doing and why it’s important.”

Another key point Heermann tries to convey to his landlords, is the notion that soil health restoration takes time.

“One of the biggest things I try and tell them is to be patient. I’m still kind of in the transitioning phase and I’ve had some setbacks and things that haven’t gone my way, but I think in the next 2-3 years, my landlords will really start to see a change.”

To help ensure that longer-term success, Heermann has 5-year leases with his landlords.

“I have to invest a lot of upfront money and time to figure out how to do this out here, so the 5-year lease provides some certainty,” he says. “But as I figure things out, I think the results will speak for themselves.”

Heermann’s focus on soil health has not only changed his farming system, but it has also fundamentally changed his business model — to one that values efficiency over size.

“When I first came back I thought the only way I could be a viable producer was to acquire more acres. But now I think it has more to do with utilizing what you have more efficiently,” he says. “If I can intensely manage what I have now, and start reducing my input costs and start turning my ‘dirt’ back into soil I think we can do a lot more with a lot fewer acres.”

While his soil health management efforts make good business sense, the young farmer is also harvesting another benefit that you won’t find in his financial ledger: An appreciation for the abundant and continuous life in his fields.

Editor’s Note: For more information about John Heermann and his farming practices, check out the article “Swapping Fallow for Covers Boosts No-Till, Dryland Margins,” from the November 2015 issue of Conservation Tillage Guide.

Ron Nichols is the public affairs officer for the NRCS.