Two new Palmer amaranth infestations have been identified in Iowa this summer, including one in a new county. Both infestations are in newly seeded CRP (spring 2016) that contained a diverse mix of forbs and grasses. The new site in Muscatine County was seeded to a wildlife habitat mix, whereas the Madison County site was seeded to pollinator habitat.

Both discoveries were made by individuals with significant experience working with and identifying weeds. We are confident that the Palmer amaranth was not in these fields prior to this year due to the low plant numbers and the random distribution of plants, rather than occurring in patches. In addition, due to the expertise of the landowners, we believe they would have observed the Palmer amaranth in 2015 if it had been present.

Early detection is the key to prevent Palmer amaranth from spreading across the Iowa landscape. Identifying new infestations before Palmer amaranth establishes a permanent seed bank can be difficult due to the similarity between Palmer amaranth and waterhemp. Without close scrutiny, it is easy to overlook Palmer amaranth because of the prevalence of waterhemp in the state.

High-risk areas are excellent places to begin scouting. These include dairies and other animal operations that use feed or bedding from states with known Palmer amaranth infestations, high-traffic areas that include truck and equipment movement from other states, fields located in counties with known infestations, and, now, newly seeded CRP or other plantings using native seed mixes.

The finding of Palmer amaranth in native plantings is a concern, but we do not believe it is a reason to avoid establishing these valuable resources. Currently, we have no information regarding what seed sources may be harboring Palmer amaranth seed. Many CRP seed mixes have species produced in other states, and it is possible the seed came from a state with more widespread Palmer amaranth issues. Purchasing seed produced within Iowa should reduce the risk of introducing Palmer amaranth. Systematic scouting of new plantings should be a standard practice, especially in mid-late summer when it will be easier to identify invasive weeds such as Palmer amaranth. Eliminating plants before seed is produced is important to prevent Palmer amaranth from spreading to habitat where it is better adapted to crop fields. 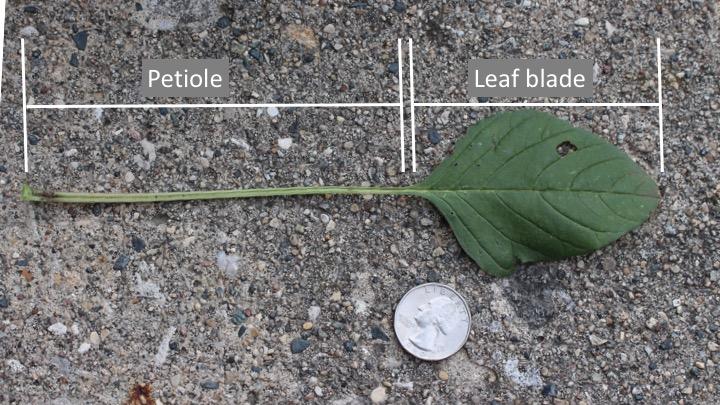 Waterhemp and Palmer amaranth are both highly variable species, thus differentiating the species when they are vegetative can be difficult, if not impossible. Palmer amaranth usually will have some leaves with a petiole longer than the leaf blade (right photo). The most reliable trait is the large, sharp bracts on female Palmer amaranth. The bracts extend beyond the other flower parts, giving the inflorescence a spiky appearance (see first photo). Iowa infestations should be flowering now, simplifying identification.

Iowa State University Extension and Outreach has resources for Palmer amaranth identification. Suspect Palmer amaranth infestations can be confirmed by a local field agronomist or Bob Hartzler for those located in Iowa.