The first generation of soybean cyst nematode (SCN) females is now visible on the roots of soybeans growing in SCN-infested fields in Iowa. The SCN females, which contain 250 or more eggs each, are white and about the size of a period at the end of a printed sentence (Fig. 1). The females are much smaller and lighter in color than nitrogen-fixing nodules, which are the color of the roots.

Digging roots (not pulling) and closely looking for SCN females is a simple, yet effective, way to check fields for the presence of SCN.

Unfortunately, resistance-breaking populations of SCN are somewhat common in Iowa and throughout the Midwest these days. Checking the roots of SCN-resistant soybean cultivars for SCN females is a good way to gauge if the resistant cultivars are not controlling the nematode. Seeing a few SCN females on the roots of a resistant soybean plant would not be cause for great concern.

Dig and look at roots from multiple places throughout various parts of the field. If SCN hasn’t been found in a field previously, high risk areas for initial infestation of fields include near the field entryway, in low spots, and along fence lines where windblown soil accumulates. 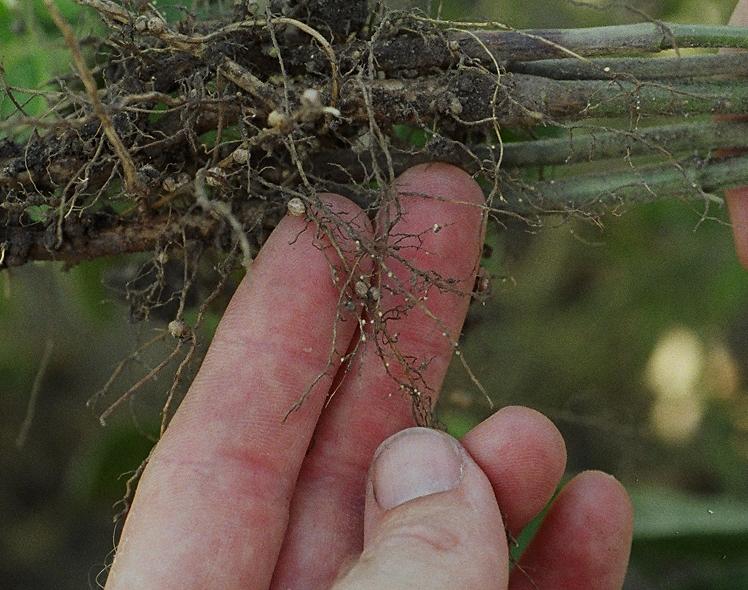 More information about the biology and management of SCN is available at www.soybeancyst.info and www.soybeanresearchinfo.com.

Managing SCN for 2020 Should Begin Now

Now is the Best Time to Sample for SCN