Further information on the European corn borer life cycle in South Dakota, identification, and injury to corn can be found in 2016 Scouting Recommendations for European Corn Borer. Management of European corn borer over the last 15 years principally consisted of planting of Bt corn hybrids, and there have been very few reports of cornfields that were damaged by European corn borers in the past decade. However, due to the lower price of corn and the cost associated with Bt corn, some farmers have elected to plant non-Bt corn. 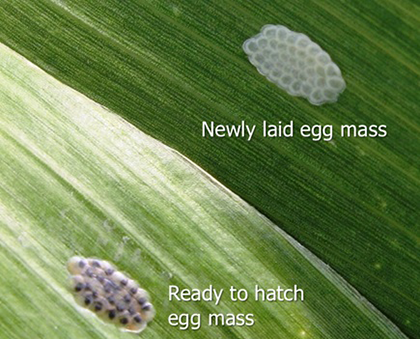 Remove and unfurl the whorls of 10 plants for each section of a sampled field and count the number of live European corn borer caterpillars.

Be sure to randomly select corn plants to sample; sampling only plants with signs of caterpillar feeding injury will result in overestimating European corn borer populations and potentially spending money on an unwarranted insecticide treatment.

Also, make sure to measure the length of any caterpillars found within the sampled whorls and also how many are observed. If caterpillars are less than ¼ inch in length waiting to spray fields is advised because more caterpillars may hatch or existing caterpillars may die from natural causes.

For each cornfield, sample at least 5 to 10 different sections within the field. Search the underside of leaves of at least 20 plants for each section of the field for egg masses (Figure 1). Egg masses are typically laid on the middle leaves, so search the middle 7 leaves (3 above and 3 below the ear).

Multiply the total number of egg masses found for each field by 1.1 to account for any eggs masses located on any unsearched leaves. If an insecticide application is warranted, be sure to spray before caterpillars exceed 11/16 inch in length and tunnel into corn stalk and ear shanks. 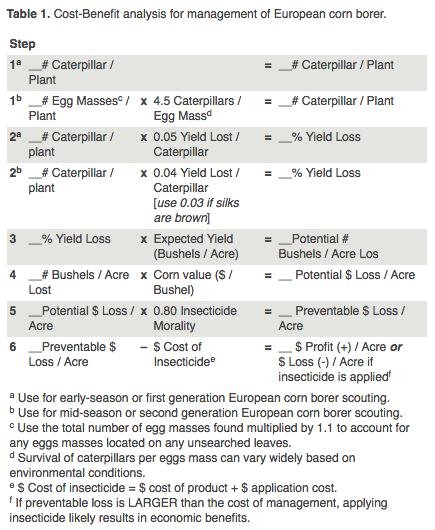 Table 1 outlines a cost-benefit analysis of management of European corn borer; if preventable loss is greater than the cost of management, applying insecticide will likely result in economic benefits.

Again, scouting for caterpillars is critical for successful insecticide applications because larger caterpillars are protected from insecticides once they tunnel into corn plants. For a list of conventional insecticides that are labeled for management of European corn borer, please see South Dakota Pest Management Guide: Corn.

Managing Western Corn Rootworm Resistance To Bt On The Fringe

Researchers: No Difference In Breakdown Of Conventional, Bt Corn Residue