Getting an Effective Cover Crop Kill

Most cover crops are fairly easy to control in a burndown program as long as you pay attention to detail. There are a few species that may require special consideration. In general, most programs begin with glyphosate, which tends to be more consistent than paraquat (Gramoxone). Liberty has a narrow fit, mostly for marestail control, but does not add much for cover crops. The effectiveness of different herbicides on cover crops is provided in accompanying Table 2-4. This table is taken from the 2016 Mid-Atlantic Weed Management Guide. 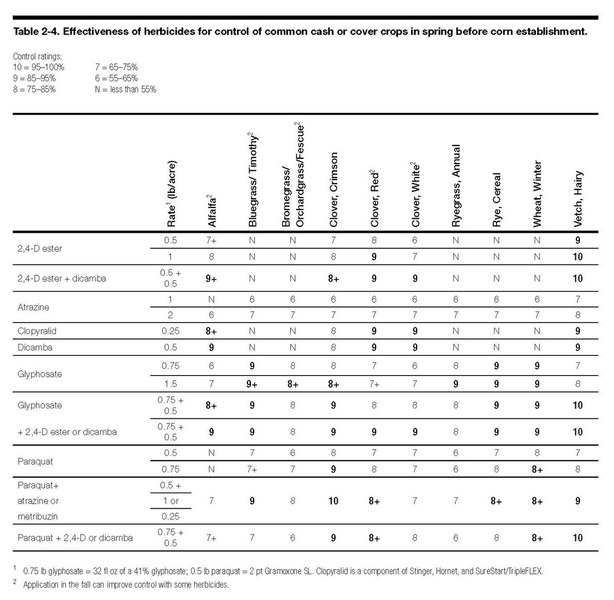 Here are some considerations as you get into the field this year.

All cover crops should be actively growing and capable of intercepting the herbicide spray (e.g. not covered with crop residue). Key points are:

Cereal rye is generally fairly easy to control. On occasion we can have problems because of cool weather at application time and/or antagonism when tankmixing glyphosate with triazines. Also, remember that Gramoxone is most effective on cereals when applied prior to tillering or after the boot stage. It’s especially important to include a triazine herbicide with Gramoxone if you are terminating cereal rye or other small grains prior to the boot stage.

Some research suggests that wheat is less susceptible to control with glyphosate than cereal rye. In general, make sure you have a sufficiently high glyphosate rate and follow other guidelines to maximize herbicide activity. The Roundup Powermax label recommends 32 fluid ounces (1.125 pounds) up to 18-inch tall wheat. For glyphosate, control is better for applications made prior to the boot stage of growth. Gramoxone can also be effective, but rate, adjuvant, spray volume, nozzles, timing (prior to tillering or after boot), and the addition of atrazine or metribuzin are important for effective control.


Annual ryegrass continues to be somewhat challenging to control. Glyphosate is the preferred herbicide and paraquat (Gramoxone) does not provide consistent control. Application during sunny warm days is best and cloudy weather will slow activity. Under cool conditions, it may take 2-3 weeks to kill the ryegrass and a second application may be necessary. Previous research suggests that small ryegrass is easier to control, but mild air temperatures 1-2 days before, during, and 1-2 days after application are important. Apply glyphosate at 1.25-1.5 pounds acid equivalent per acre with AMS and do not tankmix with herbicides that could potentially reduce glyphosate activity.

For control of most clovers or other legume cover crops, glyphosate alone is generally not effective, but is useful in mixture with other herbicides. Gramoxone alone is also not very effective on legumes and should be mixed with atrazine or metribuzin for increased performance. Dicamba (Banvel/Clarity) is one of the best herbicides for control of legume cover crops. It’s often a necessary tankmix partner with glyphosate for control of red or white (ladino) clover.

A 2,4-D ester formulation will effectively control hairy vetch and field peas, but not the clovers. Both 2,4-D ester and dicamba can be tankmixed with glyphosate without loss in activity and can be used in corn. For corn, apply dicamba or 2,4-D ester 7-14 days before planting or 3-5 days after planting for greater crop safety and plant corn at least 1.5 inches deep. Clopyralid is also effective on legumes and is a component of several corn herbicides.

Dicamba and clopyralid are not suitable for soybean and 2,4-D ester (1 pt) must be applied at least 7 days ahead of soybean planting.

Crimson clover is easier to control than the other clovers and either glyphosate or Gramoxone are fairly effective. We conducted a trial last year looking at crimson clover control in corn. Interestingly, our results showed the 2,4-D and dicamba (Clarity) were slow acting and not very effective, while Gramoxone was the most effective early followed by glyphosate (see Table 1 below).

Canola is sometimes included in cover-crop mixtures and generally overwinters in our region. Canola can be somewhat challenging to control in spring because glyphosate is somewhat weak and big canola can be difficult to control. Application timing is important to achieve adequate control. Usually adding 1 pint of 2,4-D ester to glyphosate will provide adequate control of smaller canola. Gramoxone plus atrazine or metribuzin should also provide good control of smaller canola. Dicamba is not effective on canola or other brassica species.

Mixing Up a Sprayer Solution for an Effective Herbicide Kill