Wheat responds to nitrogen (N) more than any other nutrient. However, the optimum rate and application timing of N in any given season can be highly variable. This is due, once again, to the unpredictable nature of weather. Not only does weather, particularly rainfall amounts, affect the extent to which the crop can utilize N, but it also effects the amount of N the soil is able to retain for the crop’s use.

The other reality that weighs-in this season is commodity prices have weakened considerably and, consequently, the cost effectiveness and use rate of all inputs need to be re-evaluated.

In this formula, the total N recommendation includes any N applied in fall at seeding. For example, in a field having a yield potential of 80 bushels per acre, one would apply 93 pounds per acre of N [(1.33 x 80 bushels)-13]. If 20 pounds was applied at seeding, the remaining 73 pounds would be applied in spring.

For growers using 10 pounds per acre of N or less in fall, this recommendation roughly translates to springtime use rates of 1.0-1.1 pounds per acre of actual N for every bushel of potential yield. For fields that deliver relatively low grain yields, 1 pound per acre may be sufficient, whereas fields with high historical yields may benefit from the 1.1 pound ratio.

The figure provided is to simply illustrate an example of the difference in yield response to N. A 1.0 ratio of N pounds per acre: bushels per acre best approximated the optimum N rate for the poorly drained site in 2014, and a 1.1 ratio for the 2015 site with its inherently higher yield potential. 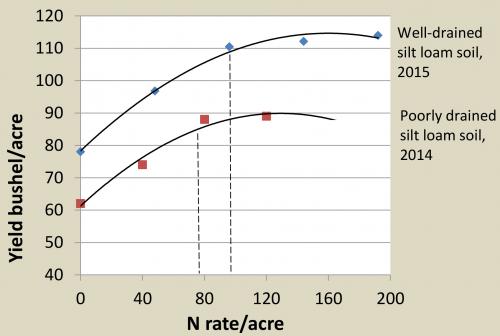 Before settling on a specific N rate, growers might fine-tune their actual rate based on other considerations:

In time, additional field research should help to better predict optimum N rates for individual Michigan wheat fields. Until then, growers might consider conducting some field trials in their own fields comparing various rates of N.