Forming Expectations for the 2016 U.S. Average Corn Yield: What About El Niño?

By Scott Irwin and Darrel Good, Department of Agricultural and Consumer Economics, University of Illinois

There continues to be a lot of discussion about the likely magnitude of U.S. corn production in 2016, with much of current focus on planted acreage.

For the most part, current expectations are that total planted acreage may decline from that of 2015, but that corn acreage will increase. The Grains and Oilseeds Outlook at last week's USDA Outlook Forum, for example, projected plantings of the 8 major crops would decline by 5.5 million acres (2.2 percent) in 2016/17, but that corn acreage would increase by two million acres (2.3 percent) to a total of 90 million acres. The USDA will release the results of its March survey of 2016 planting intentions in the Prospective Plantings report to be released on March 31.

In addition to the magnitude of planted acreage, the size of the 2016 corn crop will obviously be determined by the average yield of the crop. Factors determining yield will unfold over the next six months. For the time being, yield expectations are generally based on trend yield analysis. For example, the USDA projected a 2016 U.S. average corn yield of 168 bushels per acre at last week's Outlook Forum, just slightly below the 2015 average of 168.4 bushels.

This raises the perennial issue of what, if anything can be learned from the historical trends and patterns of U.S. average corn yields. In addition, there is the question of whether the trend yield calculation should be altered by information that would influence expectations about weather during the upcoming growing season. This year, for example, there is particular interest in whether the current El Niño episode should influence expectations about 2016 growing season weather and any resulting deviation from trend yield.

We provided a detailed analysis of historical U.S. average corn yields in the farmdoc daily article of February 26, 2015. That analysis is not repeated, but is briefly summarized here as a starting point in forming yield expectations for 2016. We continue to maintain that U.S. average corn yield expectations should be based on the longest sample of data with a stable trend yield component. 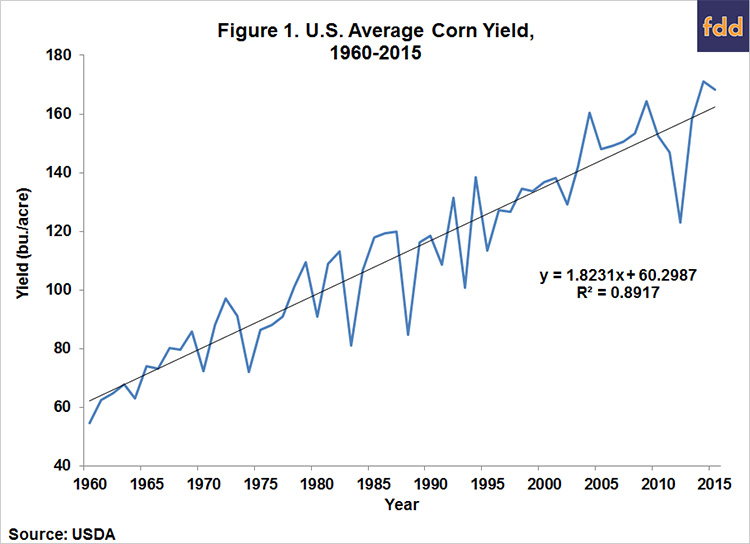 Since we have been unable to find significant evidence of trend yield shifts since 1960 in previous research (e.g., Tannura, Irwin, and Good, 2008a), we argue that the period of 1960-2015 best meets this criterion. As shown in Figure 1, U.S. average corn yields have trended higher since 1960. We found that a linear trend is the best fit to actual average yields over that period, explaining 89.2 percent of the variation in annual average yields.

The frequency and magnitude of deviations are logical for the following reasons: good (normal) growing season weather occurs more frequently than poor weather and good growing season weather helps corn yields less than poor weather hurts yields due to the non-linearity of the relationship between corn yields and precipitation (e.g., Tannura, Irwin, and Good, 2008b; Irwin, Good, and Tannura, 2009).

In addition to showing large positive and negative deviations from trend, the previous analysis (farmdoc daily, February 26, 2015) found that the duration of consecutive years with above- or below-trend yields has varied considerably and the correlation between yield deviations in consecutive years is negligible. This diverse and largely random set of yield patterns suggests that the most objective early-season yield expectation for any year, including 2016, should be based on the trend of actual yields. Figure 1 indicates that the best linear fit of actual yields in the U.S. from 1960 through 2015 results in an "unconditional" trend calculation for 2016 of 164.2 bushels.

This methodology actually results in a slight under-estimate of trend yield due to the asymmetric effect of weather on actual yields (as indicated above) so that the impact of technology (trend) is under-estimated due to sharp reductions in yield from poor weather years, such as 1974, 1983, 1988, 1993, and 2012. Our previous research on crop weather models that adjust for the asymmetric effect of weather on crop yields indicates the downward bias is about one-tenth of a bushel for trend coefficients (Irwin, Good, and Tannura, 2009). 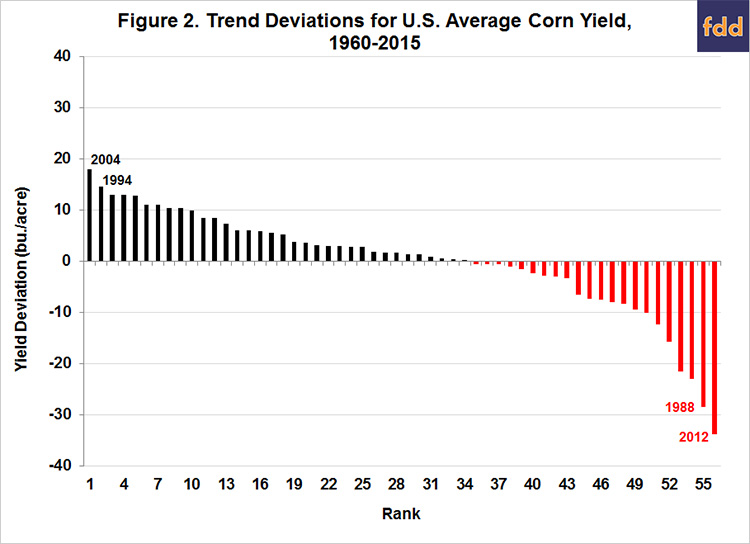 The probability of yields being below (above) the unconditional trend by six bushels or more is about 23 (27) percent. Note that our trend yield estimate of 166.2 bushels is slightly lower than the USDA estimate of 168 bushels released during the Grains and Oilseeds Outlook at last week's USDA Outlook Forum. The USDA uses a different sample period and a crop weather model to generate trend yield estimates for corn, so it is not surprising that differences emerge. The important point is that the difference, 1.8 bushels, is not large.

What About El Niño?

There is considerable discussion about the potential impact of the current El Niño episode on U.S. summer weather and the resulting effect on corn yields. The question is: Should the trend yield expectation, as well as the probabilities of above or below trend yield, be adjusted due to this episode? We start with a brief discussion of what constitutes an El Niño episode and then examine the historical record of corn yields in years with events similar to the current one.

As defined by the National Oceanic and Atmospheric Administration (NOAA), "El Niño and La Niña are opposite phases of a natural climate pattern across the tropical Pacific Ocean that swings back and forth every 3-7 years on average. Together, they are called ENSO, which is short for El Niño-Southern Oscillation. The ENSO pattern in the tropical Pacific can be in one of three states: El Niño, Neutral, or La Niña.

El Niño (the warm phase) and La Niña (the cool phase) lead to significant differences from average ocean temperatures, winds, surface pressure, and rainfall across parts of the tropical Pacific. Neutral indicates that conditions are near their long-term average." The definition encompasses four weather factors (temperature, wind, rainfall and surface pressure) and a rather vague description of the geographical location of these factors. The definitions are further refined here as:

El Niño: A warming of the ocean surface, or above-average sea surface temperatures (SST), in the central and eastern tropical Pacific Ocean. Over Indonesia, rainfall tends to become reduced while rainfall increases over the tropical Pacific Ocean. The low-level surface winds, which normally blow from east to west along the equator ("easterly winds"), instead weaken or, in some cases, start blowing the other direction (from west to east or "westerly winds").

These definitions center on sea surface temperatures in the eastern and central Pacific Ocean and are the popular way to describe the ENSO episodes. For our purposes, then, El Niño episodes occur when the Oceanic Niño Index (ONI-three month running mean) in that central and eastern Pacific region (Niño 3.4 region) reaches 0.50C above average. 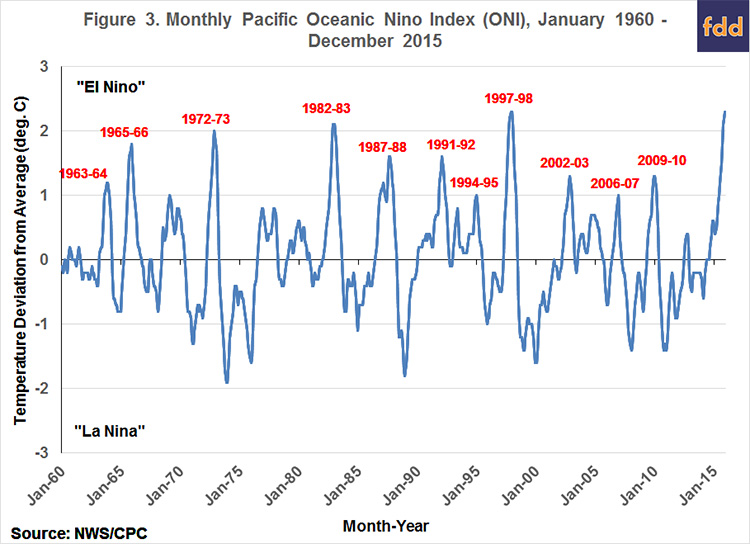 Since our interest is in "strong" El Niño episodes that precede the U.S. corn growing season, like the present one, we specifically consider episodes that occur in the portion of the pre-plant period extending from September of the previous calendar year to March of the current year, regardless of how and when the episode eventually transitioned to either neutral or La Niña conditions.

The three previous episodes that most closely resemble the current episode occurred in 1972-73, 1987-88, and 1997-98. Readers should note that there are other measures of "strong" El Niño episodes that we have not considered, and these other measures may result in a different set of analog years to 2016.

Table 1 presents more detail on the conditions during each of the 11 previous El Niño episodes that meet our definition of strong, and the trend deviation for the average U.S. corn yield in the second year of each pair. Specifically, for each of those episodes, we show the peak temperature anomaly (ranked from lowest to highest), the month of the peak anomaly, the crop year following the peak anomaly, and the yield deviation from trend in those crop years. We also calculate the average yield deviation from trend for all years with a peak anomaly of at least 10C, at least 1.50C, and at least 20C. 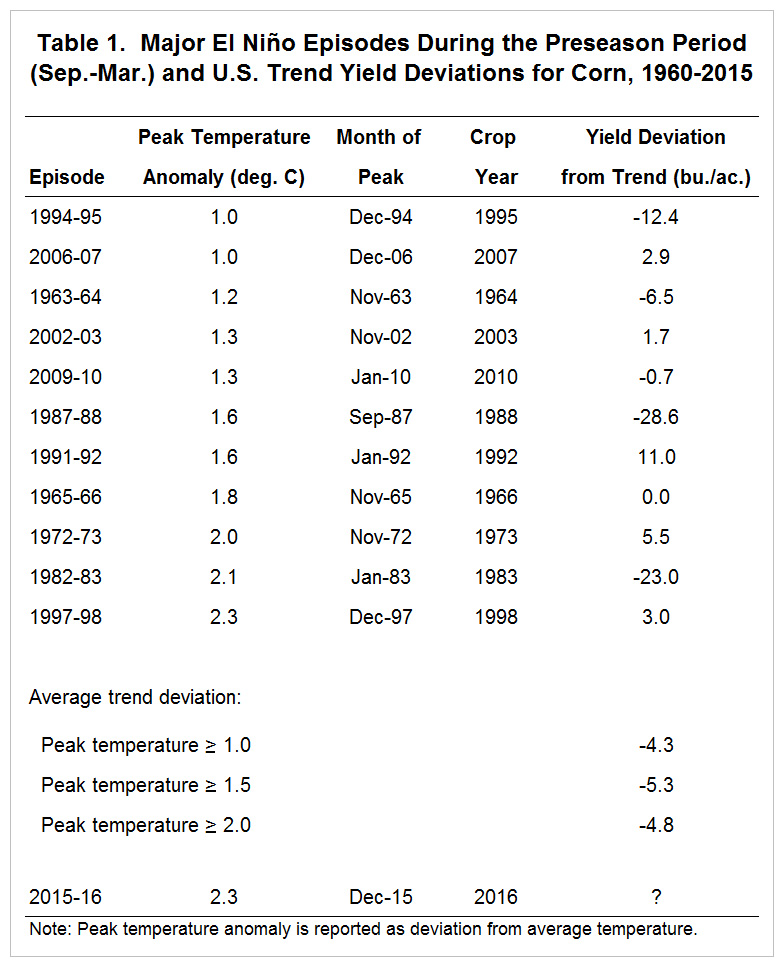 With current U.S. and world corn supplies in some surplus, the size of the 2016 U.S crop will be very important in determining the direction of corn prices over the next year or more. With some increase in corn acreage anticipated, the U.S. average yield will become the focus of the corn market as the planting and growing season progresses.

With planted acreage of 90 million acres, as suggested by USDA analysts, acreage harvested for grain would likely be near 82.5 million acres. An average yield near our calculated trend value of 166.2 bushels per acre would result in a crop near 13.712 billion bushels and likely keep corn supplies in a modest surplus for another year and keep prices near current levels.

We find that the history of corn yields conditioned on a strong El Niño episode, such as the one currently underway, does not provide a definitive indication of the direction or magnitude of the trend deviation to expect in 2016.

However, that history does point to an "elevated" risk of the average yield being below trend when compared to the unconditional risk of a yield below trend.

For example, in the three previous episodes that most closely resemble the current episode, yield exceeded trend in two years by an average of 4.2 bushels, but was below trend by -23 bushels in one year.

Very little yield risk is reflected in the current price structure, and if recent years are a guide, the market will likely continue to take a "wait and see" attitude relative to corn yield expectations.

This attitude becomes all the more interesting given that there is an additional historical tendency for extremely wet conditions in the Midwest during November and December to be followed by a higher than average incidence of corn yields below trend (farmdoc daily, February 15, 2015).

Total November/December precipitation in the Midwest in 2015 was record high. In sum, we believe it is prudent to give serious consideration to managing the elevated risk of below-trend corn yields in 2016, despite the current market structure of prices.

How Will El Nino Affect Nebraska and the Plains?