Proper herbicide application is critical to ensure products achieve their full potential for weed control. For post-emergence herbicides, this includes application to appropriately sized weeds and equipping the sprayer to achieve uniform coverage of target weeds. 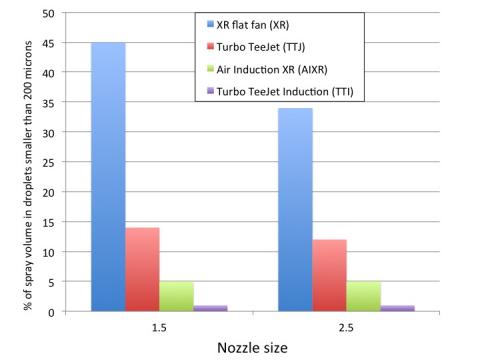 Figure 1. effect of nozzle type and size on production of driftable droplets. Photo credit: T.R. Legleiter and W.G. Johnson.
Weed scientists at Purdue University recently reported on the influence of nozzle type and spray volume on target coverage within the soybean canopy. A traditional flat fan (XR) nozzle and three drift-reduction nozzles were included in the study. The XR nozzle produced more driftable droplets than the other nozzles, and the two types of air induction nozzles had much less volume in small droplets than the XR and Turbo TeeJet (TTJ) nozzles (Figure 1).

Coverage of targets within the canopy was evaluated by placing water-sensitive paper at different heights within 12-inch tall soybeans planted in 15-inch rows. Averaged over nozzle types and spray volume, coverage declined by approximately 50% from the top of the canopy to targets placed 4 inches above the soil surface.

The Turbo TeeJet Induction (TTI) nozzle was less consistent than the other nozzles on coverage at the top and middle of the canopy. The TTI nozzle produces the largest droplet size of the nozzles evaluated, and thus would be expected to provide less uniform coverage than the others. However, nozzle type did not have a significant affect on coverage of targets at the bottom of the canopy. The authors speculated that large droplets were more efficient at penetrating the canopy than small droplets, therefore resulting in similar coverage by the different nozzles of targets placed at the base of the canopy.

Regardless of nozzle type or target placement, better coverage was achieved with the larger nozzle size that provided greater gallons per acre (GPA) spray volume. Averaged over nozzle types and the 2 years of the study, 15 GPA provided 26% coverage compared to 13% at 10 GPA.

Thorough coverage of weeds is required to achieve consistent weed control, especially when relying on herbicides other than glyphosate. The concern over off-target movement of pesticides has led to the movement towards nozzle types that produce fewer small droplets. This research demonstrates that spray volume has a greater affect on spray coverage than the type of nozzle. Using spray volumes at the high end of the recommended range should improve the consistency of weed control. Nozzle selection should be based on label specifications.

Timing is Critical with Pre-Emergence Flumioxazin-Based Herbicides in Soybeans