How Do Corn Hybrids With and Without Transgenic Traits Perform?

According to the USDA-Economic Research Service in 2015, 85% of the state’s corn acreage was planted to transgenic corn hybrids with 68% of total acreage planted to stacked trait hybrids (http://www.ers.usda.gov/data/biotechcrops/ ).

However, many corn growers in Ohio are interested in growing non-transgenic (non-GMO) corns. Some want to grow non-GMO corn to reduce seed costs associated with traited corn and/or take advantage of the premiums offered for non-GMO corn.

Growers who have not experienced serious problems with rootworm and corn borer and who have controlled weeds effectively with traditional herbicide programs question the need for transgenic hybrids. There are also corn growers interested in cutting costs by selecting hybrids with fewer transgenic traits for similar reasons.

A major concern of growers is whether the yield potential of hybrids with fewer transgenic traits or no transgenic traits is less than that of stacked trait hybrids with multiple genes for above and below ground insect resistance. One explanation for this concern is that some seed companies are no longer introducing non-transgenic versions of certain hybrids or are releasing non-transgenic versions some years after the original hybrid has been introduced.

So, when a new high yielding hybrid is introduced it’s often only available with stacked traits. As a consequence, some growers believe that in order to optimize yields with the newest “genetics” you need to plant stacked trait corn hybrids with transgenic traits for above and below ground insect resistance. 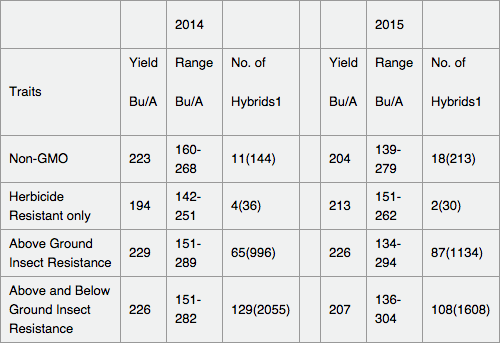 Table 1 also includes the average yield, range in yield, number of hybrids, and number of test plot comparisons associated with each of these groups. Hybrids with transgenic traits comprised over 90% of the OCPT entries in 2014 and 2015 respectively.

In Table 1, the average yields and range in yield of the four hybrid groupings show that non-transgenic hybrids are available that yield competitively with many transgenic corn hybrids in the absence of corn borer and rootworm pressure.

Once a region or test location is selected, the sort feature under “Traits” can be used to find “NON-GMO” hybrids. A similar approach can be used to assess the yields of hybrids with varying numbers of transgenic traits.

How to Select Corn Hybrids for Silage

Selection Corn Hybrids for 2018: Some Considerations