What exactly is the difference between 2-gene and 1-gene Clearfield varieties in terms of how they can be managed, herbicide applications, grass control, and crop injury?

The adjuvant can make a significant difference in the level of feral rye and downy brome control with Beyond, especially with spring treatments. Since cheat, Japanese brome, and jointed goatgrass are usually quite susceptible to Beyond, the adjuvant usually does not make as much difference in the level of control of these grasses. A recent Kansas State study near Manhattan illustrates the effect. 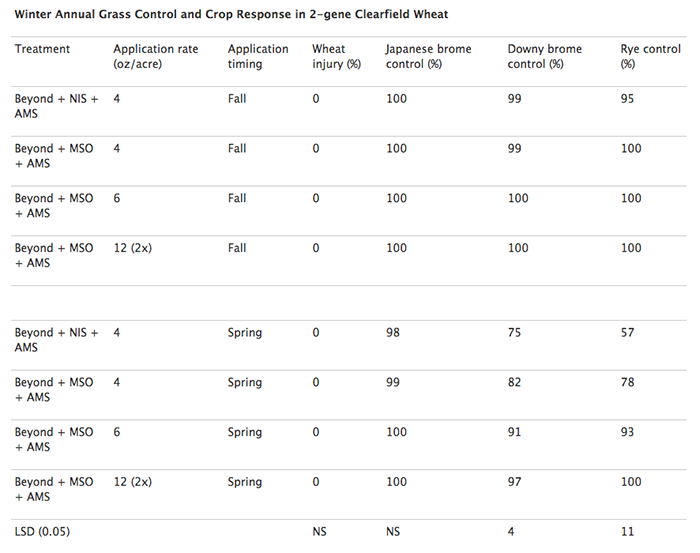 The maximum single application use rate of Beyond is 6 ounces per acre. The 12-ounch-per-acre rate would simulate spray overlaps in the field and is not a labeled broadcast application rate.

For spring applications of Beyond, including MSO as an adjuvant measurably improved control of downy brome and feral rye compared to using NIS as the adjuvant. But as mentioned above, Beyond with MSO can only be used on 2-gene Clearfield varieties. MSO has been more effective than COC in these situations.

Beyond is labeled for control of many winter annual grasses (including jointed goatgrass, cheat, downy brome, and Japanese brome), but only suppression of feral rye. Control of feral rye with Beyond in Kansas State tests has been somewhat erratic and unpredictable.

The best control will likely be achieved with fall applications, using the 6 oz rate instead of the 4 oz rate, and using MSO instead of NIS where that is allowed. In general, the best control of feral rye in 1-gene Clearfield varieties has been with fall applications. With 2-gene Clearfield varieties, producers now have more options for better rye control.

This occurs most often where there is spray overlap (2x rates), when stress conditions prevail, or where wheat was not at the recommended treatment stages at the time of application. In Kansas State tests, 2-gene Clearfield wheat varieties have demonstrated much less potential for crop injury than 1-gene varieties in these situations.

Control Weeds in Wheat Stubble Before They Set Seed