Calculating the breakeven cost of production is critical for soybean growers. As with any other agricultural enterprise the total cost of production can be divided into operating and overhead costs. Operating costs are basically the yearly out-of-pocket expenses, whereas the overhead costs include all other costs such as the use of capital, taxes and insurance, opportunity cost of land, etc. 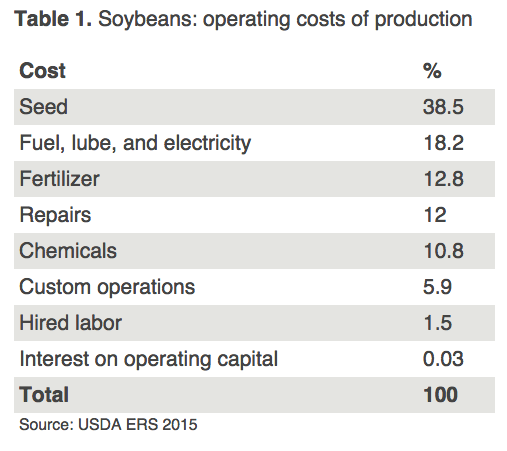 The percentages in Table 1 show which areas need to be targeted to significantly alter the operating cost of production. During 2015 custom rates for tillage, planting and harvest operations have been listed 3.5% on average above 2014 rates. This was the result of higher costs of machinery, repairs and labor in spite of lower fuel prices. With current operating cost per bushel of $4 the current increase in custom operations fees represent less than 1 cent per bushel. The impact of hired labor is even four times less.

The two areas that can be targeted with the highest impact on the operating cost of production are saving fuel and selecting the right soybean seeds. Saving fuel is approximately half as effective in reducing costs as choosing the right seeds, however it can be started right away. Things as simple as timely oil changes, using low viscosity oil, maintaining the proper tire pressure, checking air filters, and replacing faulty spark plugs, can all reduce fuel consumption significantly and prolong the life of the farm equipment.

Seed selection is more than twice as effective as fuel savings to lower operating costs. This doesn’t mean to buy cheap seed, but the right seed for the field in order to maximize return on investment. According to trials conducted by the University of Illinois selecting the right soybean variety for the same location can increase yields by 20 bushels per acre. South Dakota State University Extension has soybean experts that can help growers select the right varieties to maximize yields and profits.