Wheat harvest is right around the corner and I wanted to alert producers of a disease that has recently shown up in wheat fields around the state that hasn’t been detected in Kansas since the 1920’s and 30’s.

During the week of May 6, wheat flag smut was detected in a field demonstration plot in Rooks County and confirmed by laboratory tests. Since that initial detection, additional survey teams from USDA, KSU and the KS Department of Agriculture, were sent out to scout fields for the disease across the state. Those efforts found the disease present in fields in seven more counties all in western Kansas. No flag smut has been found in the eastern half of Kansas.

So what exactly is flag smut of wheat? Flag smut is a fungus, which is in the same broad grouping as mushrooms, and rust and bunt diseases of plants. Other smut diseases found in Kansas include common corn smut, head and covered smut of sorghum and loose smut of wheat. The flag smut spores can be seed-borne, blown by the wind for short distances or moved with machinery. These fungal spores, produced near flowering of the wheat plant, have the possibility of surviving up to 4 years in the soil.

So the cycle begins when the young wheat seedlings are infected with the fungus in the fall of the year after germination occurs and the seedling is exposed in the soil. No symptoms can be seen by the naked eye in this early stage. In general, the risk of infection is greatest when winter wheat is planted into warm, moist soils. As the plant breaks dormancy in the spring, so does the fungus inside the plant.

Symptoms generally don’t show up until after heading and the flowering stages of the wheat with symptoms such as twisted tillers and leaves with gray or black streaking running parallel with the veins.  Flag smut tends to stunt growth and reduce tillering, but generally has low impact on yield when compared with other wheat diseases, but it can reduce yields as much as 50% with favorable conditions. 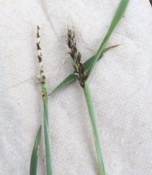 Loose smut of wheat — note that the disease only affects the head with the black smut fungus.

After further studying of the disease, it might be that the environmental conditions last fall for infection were favorable.

So what are some management guidelines for flag smut? Research has shown that the use of fungicide seed treatment, which is very economical, is highly effective in preventing the presence of flag smut and is a very important tool in the successful management of the disease.

There are many seed treatment fungicides labeled for control of flag smut and many of the widely marketed fungicides should provide excellent control of the disease.

So why is wheat flag smut important? Well, the disease caused by this fungus is found in nearly every country around the world. So several countries regulate the disease since flag smut spores are on the grain or the seed. Kansas wheat is exported across the world and is financially linked to almost all aspects of the Kansas economy.

Therefore, flag smut is of importance and the disease is taken very seriously since exports of seed, grain and even hay can be affected.

There is no human or animal health concern or direct effect on grain quality related to flag smut of wheat.

Some Tips for Wheat Disease Management in 2017