By Loretta Sorensen posted on May 14, 2015 | Posted in Seeding & Planting, Equipment, Residue Management

Above Photo: NO-TILL FAMILY. Brent Ireland represents the fourth generation on his family farm near Martin, S.D. Pictured here are Brent and his wife Tauna, and their children (left to right) Weston (13), Sam (18), Rachel (15) and Seth (21).

It’s been at least 30 years since Brent Ireland’s Dad and uncle started exploring the benefits of no-till on the Ireland Brothers farm near Martin, S.D.

While the Irelands went through a difficult transition initially, they’re finding reduced tillage and a more diverse crop rotation are paying off with healthier soils and higher yields.

As a member of South Dakota’s Dakota Lakes Research Farm, Brent encourages growers switching to no-till to seek out other no-tillers to talk about growing experiences. He credits the hands-on research completed at Dakota Lakes over the last 30 years with helping him develop his own successful no-till system.

“We’ll probably never realize the depth of the knowledge the work at Dakota Lakes has given South Dakota no-till farmers,” Brent says. “Talking to other farmers has been one of the most beneficial things I’ve done to learn more about what I could do in my own system. I know there are a lot of smarter no-till guys out there.

“Every farm is different, climates are different each year’s growing conditions are different,” Brent adds. “What worked great last year may not work this year, but overall we each have to come up with a long term, sustainable approach to farming.

“We have a lot of improving to do yet, but I believe our improved yields and soil health are indications that we’re moving in the right direction.”

The Ireland’s farm, in the southwestern part of the state, has terrain ranging from undulating to steep, to rolling and flat. Soils range from silt loam and sandy loam, with sand and fine sand just south of the farm. 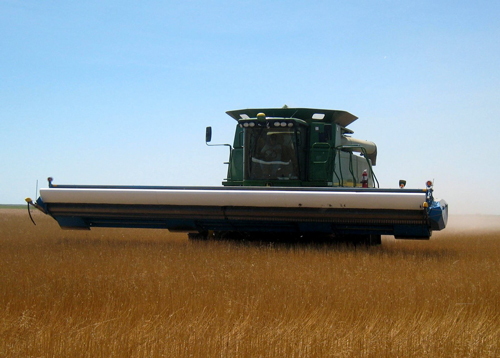 EASY ON RESIDUE. Brent Ireland says he values the way his Shelbourne Reynolds stripper header handles wheat harvest, leaving as much residue standing as possible and attached to the soil.

“Our higher elevation means we often have early frost,” Brent says. “Even though we have dry growing conditions here most of the time, milo is a tough sell in this area because it’s not unusual for milo to freeze before it dries down.”

Brent’s great grandfather, Howard, settled on the farm in 1919. Brent’s grandfather Harold passed the farm along to sons Sam and Roy. Brent returned to the farm after retiring from a career in the petrochemical industry.

It was Roy and Sam who first planted milo into wheat stubble. Their goal was to use ground cover to help retain more of the area’s 17.5 inches of annual rainfall.

Winter wheat has always been the backbone of the Ireland’s farm because most of their moisture falls between March and late June. By the time rains taper off in July, their wheat requires the warm, dry temperatures typical for their area.

Growing up, Brent observed his father and uncle producing winter wheat with summerfallow. As the Ireland’s moved to no-till, they found a need for crop diversity to help with weed management, and to improve soil organic matter. That’s why they added sunflowers to their rotation.

“Sunflowers are native to this area, so they’re adapted to our climate and work well in our wheat rotation,” Brent says. “Sunflowers are important for weed and disease management, but actually hurt organic matter levels. In recent years, sunflowers have been our most profitable crop.

“We’ve raised both birdseed and oil sunflowers, but most of our crop goes to bird seed because elevators in this area buy bird-seed sunflowers — but there are no sunflower-oil crushing facilities in our vicinity.”

Brent generally follows winter wheat with corn, and corn with sunflowers. With all three crops he plans to keep plenty of standing stubble on fields to retain moisture, avoid uneven residue mats and provide shelter for the subsequent emerging crop. 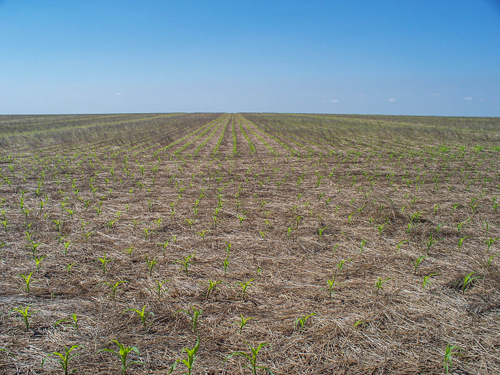 DIVERSITY WINS. Generally, the Irelands follow wheat with corn to help break disease and pest cycles, and to take advantage of the protection wheat stubble provides to emerging corn seedlings. The Irelands generally plant 95-day corn with average yields of 70-80 bushel per acre, although they’ve seen yields as high as 130 bushels per acre with adequate rain.

“We’ve found wheat stubble to be good ground cover for corn,” Brent says. “Corn isn’t as drought tolerant as sunflowers, so we want to retain as much moisture as we can and keep the ground cool to avoid evapotranspiration.”

The Irelands generally plant 95-day corn with average yields of 70-80 bushel per acre, although they’ve seen yields as high as 130 bushels per acre with adequate rain.

“Our corn-yield averages have improved with no-till. I expect improved hybrid traits have also boosted yields.”

Brent plants South Dakota State University’s Brick spring wheat variety for its early-maturing traits, which fit well with the high temperatures that can set in as early as June.

“We sometimes joke that we raise 50-bushel straw and 25-bushel spring wheat,” Brent says. “Early onset of hot summer temperatures can really reduce the yield. Our best spring wheat averages in a good year have been in the low to mid 60s.”

With a John Deere dealer in the vicinity, much of Brent’s equipment bears the JD brand. His planter is a 24-row Deere 1770 set to 30-inch spacings. He’s modified the planter with Precision Planting’s 20/20 SeedSense system to manage down force, spacing and singulation.

Using a trailing cart, Brent places dry starter fertilizer in the corn row in a 2-by-2-inch application, as the seed firmer nudges the seed into the furrow. His closing wheels help cover the row and drag chains fill in any voids to smooth the soil surface.

Fertility in each field is calculated according to soil samples and pH analysis. In a field averaging 7.7 pH and 3.5 organic matter, he adds 110 pounds of nitrogen (N), 25 pounds of phosphorus (P) and 27 pounds potassium (K) on each acre.

He plants corn deeper than some farmers, placing seed 2¼ to 2½ inches deep.

“I probably get away with that partly because of our sandy soils,” Brent says. “For us I feel it’s important to get seed close to moisture and establish a secure root system.” The Irelands usually plant sunflowers at a depth of about 1¾ inches deep, and wheat between 1½ and 1¾ inches.”

Brent believes no-tillers have access to well-designed planters, but he’s been hard pressed to find a satisfactory no-till drill. He uses an Amity air seeder but would like to see some changes in its design.

“The seeders and drills I’ve seen create more disturbance than I’d like,” Brent says. “I like to put fertilizer on at the same time I plant, but that’s challenging when you run a 60-foot seeder. Some companies don’t offer a seeder that wide. And many seeder brands don’t follow ground contour as closely as they could.”

Brent has seen inconsistent seed depth and emergence when his seeder goes over gopher mounds or other naturally occurring changes in ground contour. He believes a system that better balances down pressure across the width of the seeder would give better results.

“If shanks in the middle of a seeder section are pushed up by a mound of dirt, then outside shanks don’t maintain consistent down pressure, because all the shanks are tied to one fixed point,” Brent says. “There are some seeders who have pretty well resolved that kind of issue, but then they have other unsatisfactory problems. I haven’t seen a design yet that solves all the planting issues.” 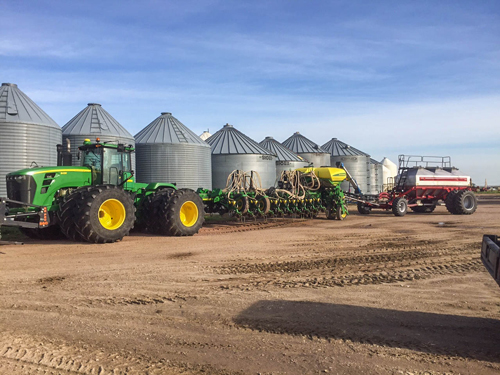 MORE EFFICIENT. South Dakota no-tiller Brent Ireland modified this Amity air cart to hitch to and work with his John Deere 1770 planter to deliver starter fertilizer as he plants, getting it all done in one pass.

Two John Deere combines bring in Brent’s crops and Shelbourne Reynolds stripper headers work well for wheat harvest. Brent says running just chaff through the header, and not straw, helps him avoid movement of the wheat residue due to rain or wind.

“We keep corn stalks as attached and upright as possible after harvest,” Brent says. “We cut sunflowers as tall as we can, too. The more residue that’s attached to the soil, the less there is to run through the combine.”

After transitioning to no-till, Brent says he’s seen annual organic matter percentages taking in soil samples consistently increase from year to year. The first soil samples taken after he moved back to the farm in 2003, following a very dry 2002 growing season.

“Moisture conditions in 2003 weren’t much better,” Brent says. “With those first soil samples, our soil organic matter averaged 2%. In some fields where soils were really poor, organic matter was as low as 1%.

In order to boost soil organic matter levels to an average of 5%, Brent believes he will have to incorporate cover crops into his rotation. He’s used a mix of oats and peas in the past to deal with isolated soil conditions, but his growing understanding of how cover crops function, and the benefits they can provide, has caused him to consider using them more consistently.

“Our plans this year are to plant a cover crop behind milo and graze some of our 525 cow-calf pairs on that,” Brent says. “We’ll plant a mix of forage barley, oats, peas, spring triticale, flax, radish and rape seed. That will help us extend our grazing season, improve organic matter and we’re hoping the radishes will help break up some hard pan in this particular field.