Although soil sampling for soybean cyst nematodes (SCN) might not be on most people’s list of favorite autumn chores, fall is a great time to sample fields for this pest. Reasons to sample for SCN include to check for the presence of the nematode in fields and to monitor SCN numbers in fields known to be infested with the pest. 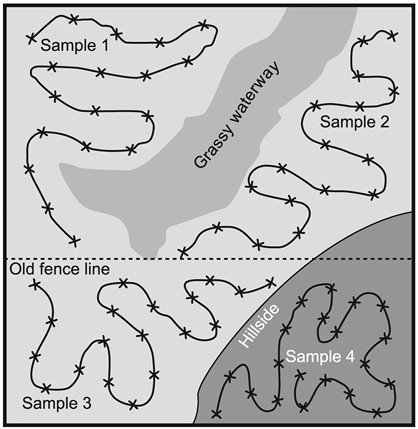 If sampling to determine if SCN is present, soil cores should be collected in fields of soybean stubble from directly underneath the harvested soybean rows.

Once SCN is known to be present in a field, it is a good idea to collect soil samples in the fall from harvested corn fields where soybeans will grow the following season in order to know the population densities of SCN in the field.

• Try to limit the area sampled to 20 acres or so, if possible.

• If grid sampling, collect one or two soil cores from every grid cell and combine cores from the number of cells that represent approximately 20 acres

• Do not collect samples if the soil is muddy or frozen.

If SCN is detected at low or moderate population densities in fields slated for soybean production in 2015, growing SCN-resistant soybean varieties is recommended. If SCN numbers are high, a second year of corn might be considered to decrease SCN population densities so that SCN-resistant soybean varieties can produce profitable yields when soybeans are again grown.

For more information about the biology and management of SCN, visit http://www.soybeancyst.info/ and www.soybeanresearchinfo.com/diseases/scn.html.

The Best Time to Sample Soil for Soybean Cyst Nematodes