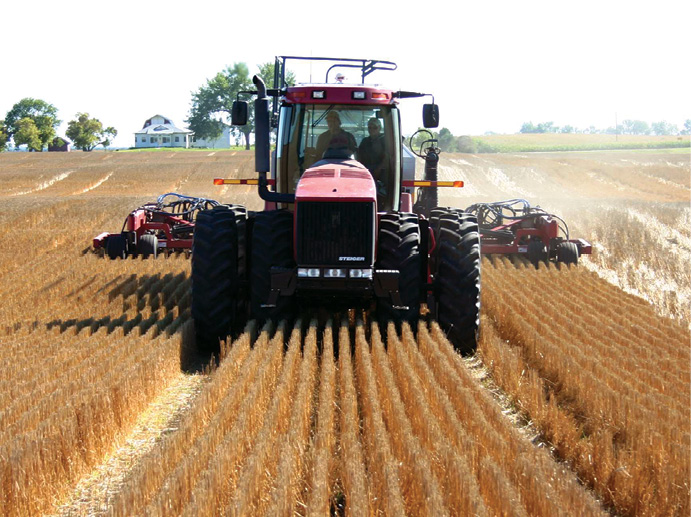 Running equipment on the same path in no-till fields gives rootbeds space to develop and may even increase yields, researchers say.

Although researchers are not advocating paved lanes or painted lines down the middle of crop rows, some no-tillers are being encouraged to establish regular “tractor highways” in planting, spraying and harvesting.

The result of following the same tracks for all operations can be less soil compaction and higher yields.

Controlled-traffic patterns improved soybean yields 7 to 10 bushels per acre under various tillage methods studied at Tuskegee Institute. Other similar studies showed an increase of up to half a bale of cotton.

In the furrow-irrigated, no-till area of north Texas, Soil Conservation Service agents encourage controlled traffic as a means of preserving planting ridges. When controlled-traffic patterns are used, they report ridges will last an extra season or more without having to be rebuilt.

Preliminary studies at both Iowa State University and Auburn University show root development in fine soils is retarded due to compaction from random tractor traffic.

One of the major stumbling blocks to widespread use of controlled traffic is the design of modern farm machinery.

Inroads are being made in this area as anti-soil compaction management becomes more practical.

As more research work is completed, it may become more apparent that no-till farmers have an advantage over conventional-tillage neighbors in fighting the…

Premium content is for our Digital-only and Premium subscribers. A Print-only subscription doesn't qualify. Please purchase/upgrade a subscription with the Digital product to get access to all No-Till Farmer content and archives online. Learn more about the different versions and what is included.
KEYWORDS compaction Controlled-traffic furrow-irrigated Gary Myers highway November 1972 rootbeds tire tractor tractor highways

Tire Tips and Other Practices for Reducing Soil Compaction