By Holly Gray posted on November 1, 2000 | Posted in Crop Protection

A two-sprayer-in-one system could cut no-till weed control costs in half.

For many no-tillers pesticide purchases constitute a major portion of their cash flow. A new system developed at Ohio State University (OSU) may be the solution to reducing pesticide costs that many no-tillers are looking for.

Development of the Double Nozzle Sprayer system is based on the proposition that it is possible to significantly reduce pesticide application rates without increasing the risk of crop loss.

In addition to cost, pesticide applications impose other constraints on your no-till system, which can be relaxed by reducing application rates. For example, increased use of cover crops with no-till is facilitated by reduced herbicide application.

Scientists at the Ohio Agricultural Research and Development Center in Wooster, Ohio, say the double-nozzle sprayer—designed to be retrofitted to existing hydraulic sprayers—slashes application rates by 50 to 75 percent and increases how well the pesticides work without increasing pesticide drift.

The scientists found that while large pesticide droplets have little biological effect on their target, they are needed in a spray nonetheless.

“The large droplets carry the small droplets into the plant canopy,” says Robin Taylor, a research scientist at OSU and one of the chief developers of the double-nozzle system. The small drops then stick to the plants and do most of the work.

Without the big drops, most of the small ones would drift away, says Taylor. “Think of it as a bicyclist drafting behind a bus or a truck. You get a free ride,” he says. 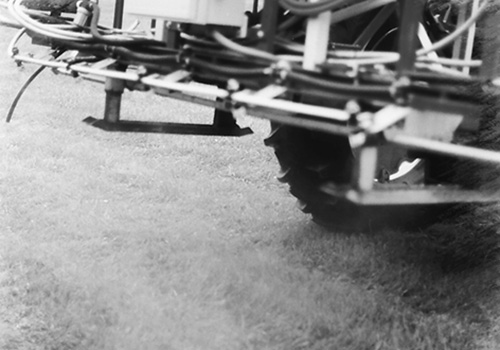 A Change In Weed Control?

If Spray Coverage Counts, These Tips Could Save A Season