By Frank Lessiter posted on July 1, 2001 | Posted in Equipment

Besides placing nitrogen where it will do the most good, this sidedressing rig aerates the soil

The Attica, Ohio, no-tiller uses a 6-row sidedressing rig that features fertilizer coulters set 6 inches off to the side of the 30-inch no-tilled corn row. He applies half his nitrogen with the no-till planter and sidedresses the rest. He no-tills 800 acres in a corn, soybean and wheat rotation.

Sidedressing is done as soon as he determines the amount of needed nitrogen, which is based on no-till corn stands and organic matter.

“We inject a 28 percent liquid nitrogen solution and a little potash 1 1/2 to 2 inches deep under the surface,” he says. “We stay as close to the rows as we can so the corn roots can get into the nitrogen band quicker.

“At the same time, we’re aerating the row middles as we’ve found the key to good yields in these tight clay soils is to get more air into the soil and to maintain a 50 percent air/water ratio. Anytime there’s over 30 percent residue, we can have problems no-tilling corn into our very tight light colored Blount soil.”

Featheringill also aerates the ground in the spring prior to no-tilling. “By aerating and more precisely placing nitrogen, we’ve gone from needing 220 pounds of nitrogen per acre to only 150 pounds without any loss in yield and can produce a bushel of no-till corn with only 7/10 of a pound of nitrogen,” he says.

“I only apply nitrogen on one side of the row when sidedressing, as yield data doesn’t justify buying a second set of coulters. While we place nitrogen on both sides of the row with our no-till planter, 4 years of on-farm research data has shown no yield difference between single and double application per row.” 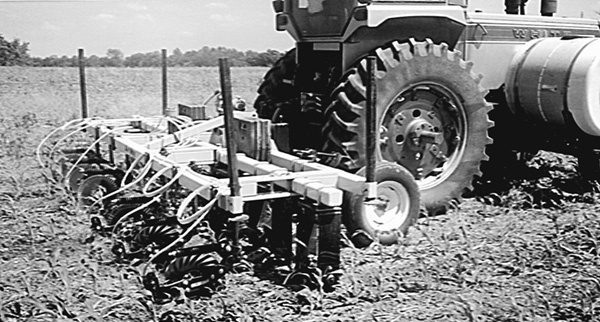 With the help of AerWay, Featheringill has used this farm shop-built 6-row three-point hitch rig for 6 years. After buying parts at farm sales and purchasing a half dozen fertilizer injector coulters at $300 per row, he saved considerable dollars. He says a new unit would cost about $13,000.

Looking ahead, he’s planning a 12-row pull-type sidedressing unit. It would be fitted with a guidance system for more precise nitrogen application at higher speeds.