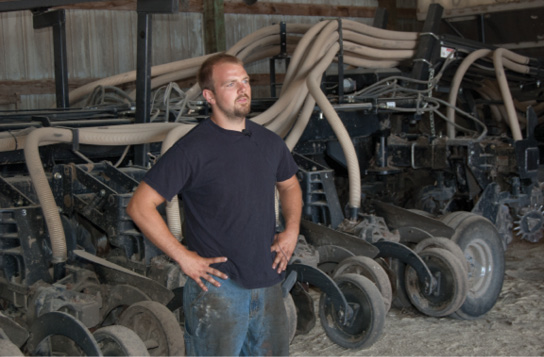 Proper Blend Of Precision Ag Pays Off For Strip-Tillers

By Jack Zemlicka posted on September 1, 2012 | Posted in Strip-Till Farming

Clay Reints doesn't shy away from a challenge. So when his father, Jeff, decided 4 years ago to begin exploring the tools of precision farming, Clay accepted the job of getting it done.

The decision was definitely the right one for the Reintses, who farm 1,900 acres in Shell Rock, Iowa.

Key Improvements. Their investment in precision farming took off in 2008 after they switched from an eight-row to a 16-row Dawn Pluribus strip-till unit. They had moved to building berms in the spring instead of fall to more easily cut through corn-on-corn residue.

The first step was purchasing the Trimble EZ-Guide 500 auto-steer system for laying down strips. Two years ago, the farm upgraded to the Case IH AFS AccuGuide auto-steer system on the strip-till toolbar, which cut down on operator fatigue in the field.

More recently, they added yield monitoring and prescription planting as ways to save field time and seed costs. By knowing which areas are less fertile — through data generated by the yield maps — and then planting accordingly, the Reintses can cut back on seeding acres that won’t produce a high yield.

Instead of averaging a population of 32,000 across the field, Clay says they’ve trimmed as much as 500 seeds per acre.