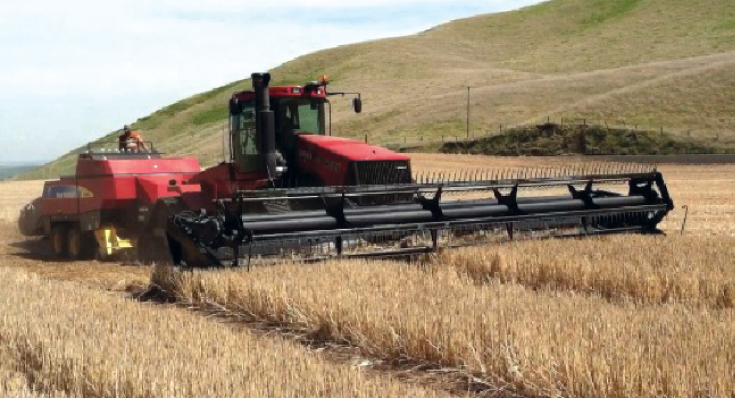 ‘Quadbaler’ Swaths And Bales In One Pass

Washington no-tiller Byron Seney created an attachment that let him fasten a draper header to a tractor to swath and windrow wheat stubble for his baler.

A Washington no-tiller has designed an attachment that allows him to use a draper header on his tractor to swath and bale wheat stubble in one pass.

Byron Seney, who no-tills winter wheat near Dayton, Wash., is using a 30-foot-wide MacDon draper header attached to the front of his Case IH Steiger 535 Quadtrac tractor, which pulls a New Holland BB960 3-by-4 square baler.

He billed this trademarked setup as the world’s first “Quadbaler,” but hasn’t decided whether to go into production.

Seney farms on some of the steepest farm ground in the world, with slopes ranging from 20% to more than 30%.

With wheat yields reaching over 100 bushels an acre, there’s more than enough residue left after harvest. Seney wants to remove it quickly and efficiently to avoid interference with planting the next spring.

Seney says there were some equipment issues to be sorted out as he went back and forth with Case IH engineers on the design.

“This was a function of getting something that would stay on the hill and carry the load,” he says. “Wheel tractors won’t stay on the hills. With smaller tractors, the baler pulls the tractor around on the slopes.

“You can get a swather and use it on flatter ground, but it drives like a Bobcat loader and doesn’t work on hills.”

Seney eventually used his fabrication shop to design a lift attachment for the header. He says it looks like a hollow feeder house.

Putting Faith in No-Till into Action