U.S. farmers have embraced genetically engineered (GE) seeds in the more than 15 years since their commercial introduction.

Herbicide-tolerant (HT) crops, developed to survive application of specific herbicides that previously would have destroyed the crop along with the targeted weeds, provide farmers with a broader variety of options for effective weed control.

Insect-resistant crops contain a gene from the soil bacterium Bt (Bacillus thuringiensis) that produces a protein that is toxic to specific insects, protecting the plant over its entire life.

Use of Bt-only corn dropped from around 16% of planted corn acreage in recent years to 5 percent in 2013. Adoption of “stacked” gene corn varieties (with both HT and Bt traits), though, increased sharply in 2013, reaching 71% of planted corn acres (up from 52% in 2012).

Adoption of all GE corn, taking into account the acreage with either or both HT and Bt traits, reached 90% of U.S. corn acreage in 2013. This chart comes from the ERS data product, Adoption of Genetically Engineered Crops in the U.S., updated July 2013. 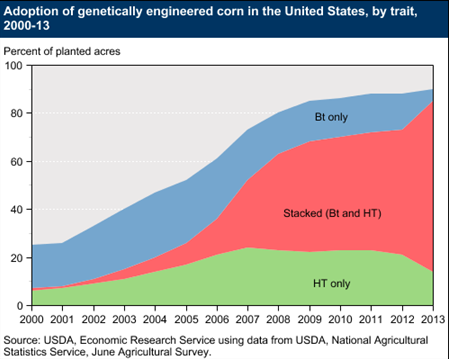 Waterhemp Jumps To No. 1 Weed To Watch In Midwest