Is Variable-Rate Planting An Option For The Next Growing Season?

If you haven’t already ordered your seed for 2013, you’re probably getting ready to do that. And you may be thinking about upgrading your planting equipment.

First, we all know that fields vary in soil type, elevation, slope, and drainage. Many of the newer options on planters planting rate to be changed easily, on the go, by simply programming your monitor.

The desire to optimize yields and be as efficient as possible with the current pricing of seed, along with the ease of implementing variable rate planting makes the whole idea very intuitive.

The biggest limitation at this point is knowing when and where in the field you should change your population. Many growers get their prescription maps from someone else (often the seed dealer) and don’t even know how they are made. Usually they are based on digital soil survey information, but some of the “experts” also use other information, like previous yield maps, CSR ratings, and aerial imagery of bare soils.

While we are still processing the 2012 season plant population trials, we do have trial data from previous years. If we look at Iowa Soybean Association On-Farm Network trials that compared two corn populations in replicated strips across the fields and break out the yields by soil types, we can see yield differences by soil type. Because of the wide range of soil types, we grouped the soil types by the CSR.

In Figure 1 (above), you can see that the lowest CSR soil had the lowest overall yield average and yields did increase according to the CSR of the soil. This verifies that the soil map units do actually reflect differences in the grain yield.

But to justify variable rate planting according to soil type, we need to confirm there is actually a yield difference between the two populations in each of the different CSR soil areas.

Basically, this says that CSR information from soil surveys alone is not a good basis for building a prescription for variable rate planting, if the expectation is improved yield. 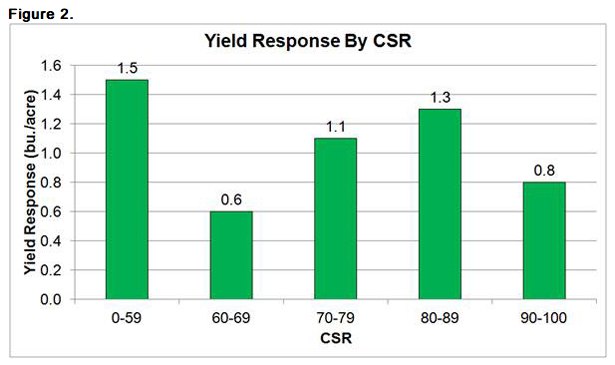 Having said that, we’re not saying you shouldn’t try it. What we advise is that if you want to try variable rate planting, you also devise a way to test it against your current planting methods, in order to know whether it actually produces a yield difference that is enough to pay for any additional time and input expense.

Is Variable-Rate Seeding The Right Practice For You?