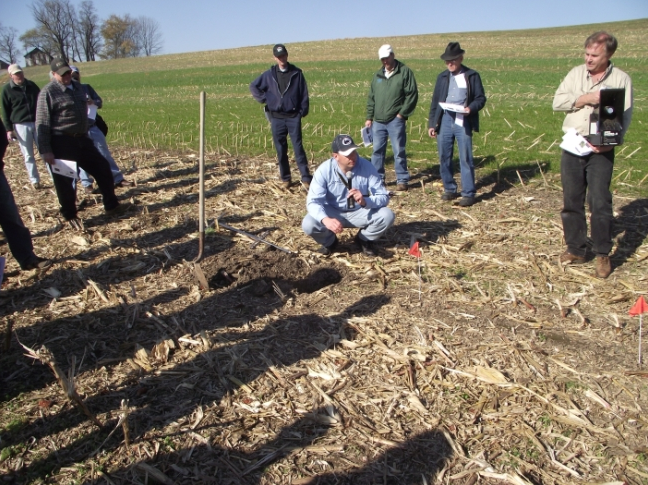 Nobody needs to sell Ron Kopp on a no-till system.

He’s been doing it for the past 20 years, and five years ago, he went 100 percent no-till on the 800 acres he farms near Middletown in Dauphin County.

But when it comes to changing the way he takes care of manure on his fields, Kopp needs a little more convincing that injecting it into the soil instead of traditional spreading or broadcasting is the right way to go.

It’s a topic Penn State researchers have been looking at as part of a statewide study on cover cropping and manure injection on farms.

Speaking at a field day on Thursday last week at Kopp’s Stoney Lawn Farm, Lancaster County Extension educator Jeff Graybill said the concept of manure injection goes back to the days when farmers used long shanks to get manure directly into the ground to give plants better access to nitrogen, phosphorus and other nutrients in the manure.

But the concept fizzled when more and more farmers went no-till. In fact, more than 50 percent of the state’s cropland today is planted no-till.

With increased pressure on farmers to better account for manure and to use more best management practices (BMPs) such as cover crops to control nutrient runoff, the concept is gaining traction again.

“We’ve gotten away from it, and we may want to get back into it,” Graybill said.

Kopp’s farm is one of eight sites around the state where manure injection in a no-till cover cropping system is being studied. It encompasses three small plots on his farm, where the comparison between traditional spreading and injection is being replicated three times.

The technique entails cutting a shallow slit in the ground and injecting manure right into the slit.

There are also various cover crop mixes being studied on each plot.

Kopp’s farm is in the Conewago Creek watershed, a 53-square-mile area with pieces in Dauphin, Lancaster and Lebanon counties, where a large-scale restoration project is under way.

Graybill said the goal of the project is to see if manure injection can be incorporated into a no-till cover cropping system and whether it is economically feasible for farmers to adopt.

Robb Meinen, senior Extension associate at Penn State, said one of the drawbacks of manure injection is the potential for increased costs because manure haulers have to constantly stop and turn around to get the manure injected.

There is also the chance of increased compaction in wet soils.

One of the things Meinen is looking at is the interaction of plant roots to manure bands in the soil and whether or not there is an advantage to planting seed directly on a manure band.

Meinen said it is too early in the project to tell whether putting seed directly on a manure band will lead to better yields than putting it a few inches away.

But he is encouraged by the increased water-holding capacity of soils in no-till systems and how manure injection can bring even greater benefits.

According to two years of research in 2006-07 at the Penn State research farm in Rock Springs, Pa., manure injection reduced nitrogen loss in soils an average of 79 percent compared with traditional surface application of manure.

Sjoerd Duiker, associate professor of soil management and applied soil physics at Penn State, is looking at various cover crop mixes in the system.
Kopp traditionally uses wheat as a cover crop, but in the small plots, several mixes have been looked at, including crimson clover with ryegrass and oats with rye.

In some circumstances, manure injection can enhance those advantages, he said. “Where I see the major benefit is in the spring, where injection really helps to conserve more of the nitrogen,” Duiker said. “So I think there is a real good fit.”

On Kopp’s farm, manure was injected a few days before he went through with his corn planter in the spring.

Traditionally, Kopp spreads manure in the spring and fall. He usually supplements his corn with starter fertilizer and maybe a sidedress of nitrogen if needed.

He said he gets enough manure from his 300 or so dairy cows to take care of the 300 acres on his home farm. He also rents an additional 500 acres in the surrounding area, where he spreads poultry manure and uses synthetic fertilizer.

The wet spring forced him to spread his dairy manure on additional acreage, due to runoff on the home farm.

He also had trouble killing off his winter wheat. In fact, this was the first year he had to use wheat as a forage because it was too difficult to burn down.

So far, Kopp said, he has seen a five-bushel-per-acre advantage to using injection versus broadcast.

Not impressive, he said, given the fact that injection takes more time than surface applications of manure, meaning more money he has to spend on paying a licensed manure hauler.

But with the cost of synthetic nitrogen going higher, Kopp likes the idea of being able to keep more nitrogen in the ground and saving some money.

“The more you save, the better on your investment it is, so it might be an advantage to really take serious consideration into something like this,” he said. “It’s an interesting concept.”

If anything, Meinen hopes the concept of manure injection will make people more aware of the importance of environmental and economic factors when dealing with manure.

He sees manure injection as a potential tool to help farmers develop a good balance of nutrients on the farm.

“Manure injection can be one of the tools to help maximize those things in the right situation. We can conserve those nutrients in the farm,” he said.

“Smaller producers can take the same amount of manure and apply it to more acres and buy less fertilizer,” he said. “For somebody with phosphorus limitations on their soil, this conservation of nitrogen means they can purchase less fertilizer. So there is some benefits. The benefits of injection occur all year.”