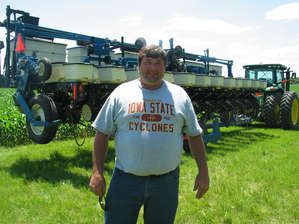 Terry Elsbernd no-tills most of his 1,400-acre farm near Decorah, Iowa and says the practice is saving soil from eroding away from his fields. (Agri-News photo)

Some farmers are losing soil at an unsustainable rate, but not Terry Elsbernd. He is actually building soil on the land.

Of the 1,400 acres Elsbernd farms, 80 percent to 90 percent is in no-till. He receives an incentive payment from the Natural Resources Conservation Service's Conservation Stewardship Program to do it. He doesn't see the soil wash out in heavy rains like they did before.

He is losing 1.5 tons of soil per acre per year while conventional tillage on his soil type would lose an estimated 6.7 tons. Meanwhile, crop residue that breaks down in the fields is building organic matter in the soil.

Approximately 60 people gathered under a white tent at the edge of his corn field in Decorah on June 28. They came to learn and ask questions about no-till cropping systems.

About 20 percent of Winneshiek County farmers have given up their chisel plow and finisher to switch to no-till, said NRCS' Todd Duncan.

Duncan, the county's district conservationist, said no-till requires a different kind of farm management and attachments on a planter. It causes less wear on machinery. It makes the soil better at absorbing water instead of letting it runoff or cause erosion.

Soil is the foundation of a crop farmer's business, but those who use conventional tillage are letting their business literally run away, said Duncan.

"If you can visibly see erosion, it isn't working," he said.

The soil that's lost is precious top soil, the part that has the best ability to hold nutrients and water, said Brian Lang, ISU Extension agronomist. Organic matter found there has four times the nutrient-holding capacity of the rest of the soil.

ISU conducted a five-year trial on farms around the state that showed no-till corn had a 5 percent lower yield than conventionally-tilled corn, but Lang said farmers need to consider the big economic picture. They need to take into consideration the many benefits of no-till when deciding whether or not to use it. The yield reduction for soybeans was 2 percent.

Kenny Meyer of Castalia, another farmer who uses no-till, said he might be getting lower yields, but he figures he can afford to because he has less input costs.

Lee Camp, an NRCS soil scientist, said farmers can buy soil test kits off the Internet that can be used to compare fields. The kits allow farmers to see for themselves how no-till is affecting their soil.

John Rodecap showed data from his farm south of Decorah. His soil's tilth and quality rose while the amount of phosphorus and soil leaving the fields dropped after he switched to no-till seven years ago. His cost for fuel per year per acre has been reduced as well, from $28 to $14 in conventional systems on one area, to $9 to $6 with no-till.

When 80 percent of corn stalks were removed, soil was preserved on his farm with no-till but it wasn't with conventional tillage.

Farmers are also hearing about how tillage can release nitrous oxide.

"If we can reduce tillage, we can maintain more of our nitrogen," said Rodecap.

NRCS has made energy a resource concern, like soil and water. Duncan said he thinks farmers will see more programs tied to energy conservation.

The Winneshiek Energy District offers farm energy audits. From the audits, a financial analysis is created to show what can be done to improve energy efficiency. It estimates payback times for different enhancements farmers might make.Those who are enrolled in CSP may be able to get funds to help pay for their audit.

Paying for energy is also one of the biggest drains on the local economy, since most of that money goes elsewhere, he said.

The district works to connect farmers with, and provide technical assistance for, opportunities and programs available to help them save energy.

Commitment To No-Till Pays Off For Kentucky Grower