Growers Ready to Put Marginal Lands to Better Use

Energy crop developer Ceres, Inc. reports that growers are ready and willing to produce biomass for biopower and advanced biofuels, and have the land to do so. 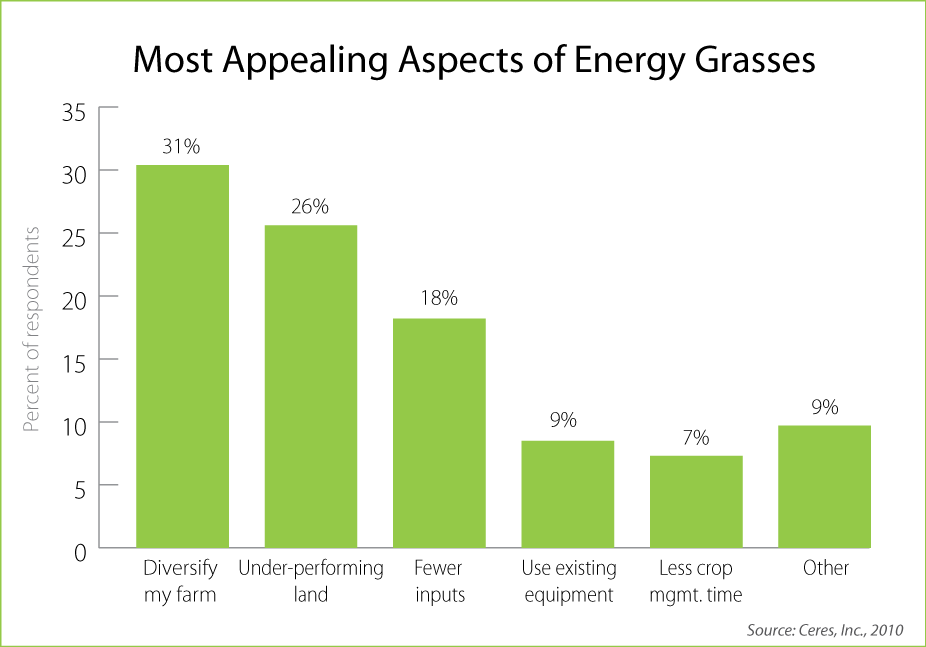 A company survey of U.S. growers showed that 71% of respondents were very interested or interested in growing dedicated energy crops. Moreover, 77% said they had under-utilized land on which to establish energy grasses like switchgrass, sorghum and miscanthus.

Agricultural producers said that the ability to diversify their current operations was the most appealing benefit of energy grasses. They were also keen on making better use of their marginal land and spending less time, money and resources on crop management.

In what is considered good news for end-users, growers were solidly supportive of long-term contracts with customers. Over 70% were very interested or interested in growing under contract, and 48% they would anticipate putting at least half their acreage in long-term contacts.

“This is one of the areas where we were interested in learning more about, since reliable feedstock supplies will be critical for new bioenergy facilities to obtain project financing,” said Gary Koppenjan who directs communications and product marketing for Ceres.  “What constitutes a long-term contract will likely be an area for discussion, but it appears the suppliers and users are on the same page.”

Somewhat surprisingly, Koppenjan said growers showed little interest in owning a piece of the bioenergy facility and were more interested in incentives for quality and inflation adjustments, or prices linked to energy prices. Ceres expects to explore this area more in future surveys, he said.

Ceres says that the grower enthusiasm for homegrown bioenergy reflected in this survey is being tempered by the slow implementation of Department of Energy loan guarantees, which were authorized by Congress and promoted by the Obama Administration as a cornerstone of its renewable energy policy.

“There's a lot of frustration with the delays in getting the guarantees implemented,” said Frank Hardimon, Ceres seed sales director. “If we could get the first several cellulosic biorefineries built, the U.S. would be well on its way to greater energy security and lower emissions, as well as lasting job growth, especially in rural communities.”

The non-scientific survey was completed this summer and was weighted to growers in Southeast United States. The results were consistent with feedback that Ceres has received at grower meetings, conferences and farm shows, Koppenjan said.