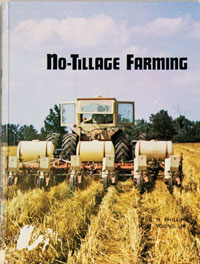 Phillips and Young wrote the first book on no-tillage agriculture in 1973.

Shirley Phillips received his bachelor’s and master’s degrees from University of Kentucky’s (UK) College of Agriculture. He served as an associate agricultural agent, state specialist in field crops and associate director for extension during his tenure at UK. His initial no-till work was in collaboration with farmer Harry Young Jr. and Reeves Davie, agricultural extension agent.

Until he saw Young’s no-tilled corn field and spraying program, Phillips advocated conventional tillage and thorough seedbed preparation. But by 1963, Phillips, a previously committed “plow-man,” was a champion of the practice.

“The limitations of no-tillage are only in man’s imagination…” – Shirley Phillips, UK

He started a revolution among his colleagues in the UK Dept. of Agronomy. That department eventually became the world’s leader for research in no-till crop production. His efforts in developmental research and in disseminating information — through personal contacts, technical and popular writings, radio, TV, field days and short courses — provided the stimulus that made Kentucky a world leader in no-tillage farming and research. The world’s first no-tillage conference in the world was held in Kentucky, thanks to his efforts.

Among his other major contributions was a campaign to increase corn, soybean and wheat production so that Kentucky could compete with the Corn Belt. Another was the development of double-cropping systems with soybeans following barley and wheat so Kentucky farmers could deliver two crops in one year. The Department of Plant and Soil Sciences established the “S.H. Phillips Distinguished No-Till Agriculture Lecture” in his honor.

The late Harry Young Jr. is a pioneer of the no-till movement, having planted, the first commercial plot (0.7 acres) in 1962 on a home-rigged tobacco planter. The family farm is now operated by his son, John, and his grandson, Alexander. In 2022, the field will see its 60th season in continuous no-till.

Innovating in no-till for his own benefit wasn’t enough for Young. He spent countless time helping spread the word about the advantages of no-till and helping others learn the techniques to make it successful on their own farms.

Young co-authored two textbooks on no-till agriculture, had 3 films produced about his farming techniques, traveled around the world to discuss the farming practice, and hosted thousands of national and international visitors at his farm.

He also saw the merits of no-tilling corn plus wheat with double-cropped soybeans — a common practice in today’s farm fields.

He received his degree from UK in 1941 and an honorary doctorate in 1976. He worked for 8 years as a field agent for farm management for the UK Cooperative Extension Service prior to returning to the farm full-time in 1954. 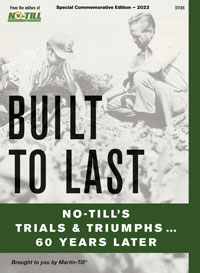