By Mike Lessiter posted on April 27, 2022 | Posted in Crop Protection

With no prior cropping knowledge, John Franz was an unlikely candidate to permanently change agriculture’s fortunes in 1970 – when all other Monsanto chemists wanted no part of a dying research project.

Editor’s Note: This article is a web-only continuation of “No-Till Herbicide History, Part II” that appeared in the May 2022 edition of No-Till Farmer. The article detailed the history of glyphosate and Franz’ 1970 discovery. Below is additional content gathered up on the chemist who forever changed agriculture, and no-till.

Franz shared that he was the second youngest of six children in his family, raised in Springfield, Ill. His father was manager of a dairy, Sangamon Dairy Products Co. and had only a grade-school education before entering the workforce. His mother was a homemaker, and John would be the only one of the children to pursue a career in science.

After completing his doctorate in 1955, Franz accepted a job with Monsanto’s Organic Division, which did not yet have an Agricultural Division (which would be created in 1960). There he worked on a variety of projects that included polymer flame-retardants.

In 1967, Franz jumped at a chance to transfer to the new Ag Division because he liked its emphasis on publishing, academic contacts, and the freedom to pursue ideas.

“For a year, I studied plant physiology and did basic plant growth studies; no chemistry,” said Franz. During the year I spent with the biologists and plant physiologists I became convinced that the biorational approach was the direction to move in.”

For discovering glyphosate (Roundup) as herbicide in 1970, Dr. Franz has been recognized with numerous awards – far outstripping the $5 he got from Monsanto for the first glyphosate patent. Some of the most notable honors include becoming the first recipient (in 1983) of the Queeny Award, Monsanto’s highest technical award to recognize an invention that resulted in a commercial success. In 1987, President Reagan presented Franz with the National Medal of Technology, recognizing Roundup’s impact “upon the production of agricultural food and fiber as well as agricultural practices throughout the world.” Very few agricultural technologies have won the nation’s technology award, according to Monsanto. He also received the Perkin Medal in 1990 in recognition of his contributions to research and development of applied chemistry.

He retired from Monsanto in 1991 with his name attached to more than 840 U.S. and foreign patents. In 2007, he was inducted into the U.S. Inventor’s Hall of Fame.

The Start of Roundup’s Discovery

Franz says the glyphosate as a herbicide story began in 1960, long before he was working in the Ag Division. “The thing that started all this off was that a couple of chemists in the Inorganic Division of Monsanto had developed a new process for making a class of compounds called tertiary aminomethylphosphonic acids. This class of compounds were of interest as sequestering agents, detergents, and complexing agents.”

When the chemists found a simple process of making the compounds, the inorganic division cranked them out for testing.

“A Fellow who ran the plant physiology section of ag by the name Dr. Philip Hamm was interested in getting these compounds tested for herbicide and plant growth regulating properties. Apparently, at that time, they weren’t being submitted into a general screen, so he collected them and brought them over to Ag and started screening them, because he was head of the screening section.”

Franz noted that the inorganic chemists who originally made these compounds were making them as complexing agents -- that’s where their interest was. “The fact that Hamm had to procure the compounds for ag screening indicated that the inorganic chemists weren’t really interested in them as herbicides, and they weren’t even thinking of them in those terms.”

In the screening process, Hamm found two compounds that had interesting perennial herbicidal properties. They were interesting, but were weak, and weren’t commercial-type products. “Dr. Hamm was pretty enthused about it though, because there weren’t too many compounds that were useful or actually sold for perennial herbicide activity at that time period, in the early 1960s.” 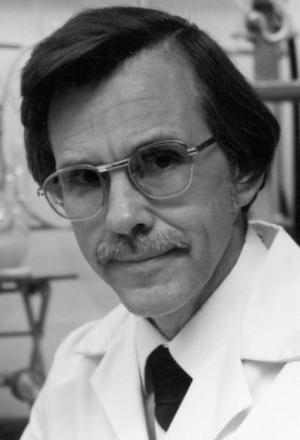 “Hamm was always hoping to be able to get a compound of at least 10-fold higher activity. For the next 9 years, from 1960 to 1969, chemists kept cranking out these compounds, and making a lot of them, and having them tested, but they never could find anything better.

"Dr. Hamm kept testing the two compounds that were considered leads in the field, trying to reformulate them and do other things that would improve their activity, but he just couldn’t get them up to the point where they could be commercially interesting.”

The other researchers all had their own projects going, and here’s this Phil Hamm “coming around trying to beat them over the head and put another thing on their agenda,” Franz says. “It turns out, Phil Hamm was the type of guy who had just hundreds of ideas, most of them bad, but some of them darn good. He just spewed out these ideas, which is good because he wasn’t biased by anything. But he couldn’t convince any of the ag chemists to get interested in the phosphonic acid area of chemistry.

“By 1969, they just about given up hope; at least, all the other people had. Dr. Hamm always felt that in the phosphonic acid chemistry area, there was something that was going to be commercial. He didn’t know what, but somebody should keep working in that area, he thought. He went around to various chemists and tried to get them interested in this, and everybody rejected it. They thought, ‘Dead area! Don’t bother me with this.’”

“He went around to various chemists and tried to get them interested in the project, and everybody rejected it. They thought, ‘Dead area! Don’t bother me with this.’…”

Franz had joined the Ag Division in 1967, about the time the program was dying out. “The first thing he did was nab me. I’d had all these other projects going, but he did get me interested; I guess, maybe because I didn’t have the biases that the other people had.” Franz, a newcomer, agreed to take a look and see if he could come up with any ideas.

Franz’ ideas involved other compounds that hadn’t been made and he started some synthesis that was a “total failure.” Proceeding along the same lines, he says, none of these other compounds was any more active than the original ones.

“By early 1970, I was about ready to terminate that project too, but something told me I ought to at least try it from a different perspective. You know, try to think of some way to approach the problem on a totally different basis than just a chemistry synthesis viewpoint, which is the way chemists usually operate, that is to make analogs, and homologues, and so on.

In addition to the stories previously shared, here are 3 additional of the highlights from that transcript.

“If you want to do it, it’s all right with me, but it’s looking down a dead horse’s mouth. I can tell you; it’s just going to be a waste of time…”

“I started thinking in biological terms, instead of synthesis, and I came up with this hypothesis: maybe the lead compounds were metabolized by the plants to produce something common that was more active.”

Franz wrote a hypothetical scheme but admitted it didn’t look promising, but started making the metabolites, first with the tertiary aminomethylphosphonic acids and then the secondary ones, which no one at Monsanto had done before, as the Inorganic Division only produced tertiary type products.

He found a method in the literature on how to make these potential metabolites. He had 3-4 secondary acids in his scheme and the first one he made was “deader than a door nail” and showed no activity whatsoever.

Luckily for agriculture, Franz figured that was “par for the course” and kept at it. “I was convinced I was going to complete the synthesis of all the compounds that I had postulated from my hypothesis, so I went on and made the next one.

"The second one was glyphosate, and yes, I was as surprised as everybody else that it was really quite active. It was at least 10 times more active than the lead compounds, so that’s what started the glyphosate program.

“The funny thing is, of all the analogs of glyphosate we’ve made since then -- every reasonable one we could think of -- none of them are active.”