Prepayment of farming consumables on the rise, equipment market bearish.

In this most unusual year of high farm incomes, rising inputs and scarce supply of nearly everything, No-Till Farmer conducted a survey on Nov. 15-17 on the year-end situation, that drew 257 growers and 80 dealers.

First for the survey of farmers on Nov. 17. No-Till Farmer asked growers what will be different about their year-end tax-plans this year.

For those making a living in the farm equipment business, their responses show there’ll be high competition for their dollar over the next month and a half. Farmers are planning significant pre-purchases for all major farm consumables, led by liquid fertilizer, as more than one third of growers are increasing their normal pre-paid purchases before Dec. 31. 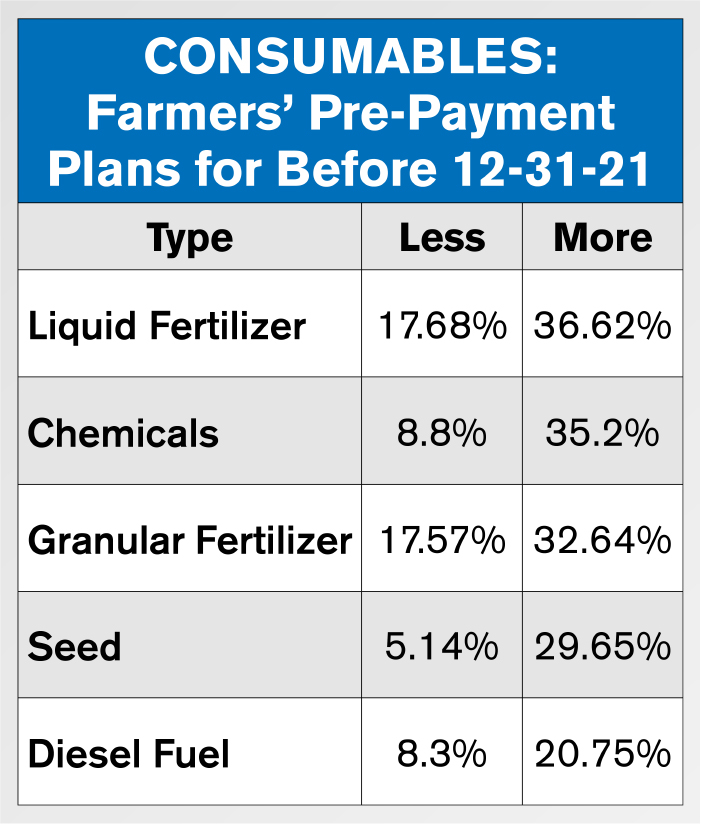 The “Year-End Tax Decision-Making Survey” shows farmers’ are increasing looking to prepay their consumables this year.

More dealer data is available at Ag Equipment Intelligence's On The Record newscast.

The poll was anonymous for respondents, but space was provided for comments.

Some wrote about uncertainty specifically relating to fertilizer purchases.

“As of today (Nov. 15) I believe we will still purchase and prepay for inputs similar to in prior years,” one grower wrote. “But I am still waiting on a quote for two different fertilizers including prepay incentives that I don’t have yet.”

For at least one grower, the picture appeared bleak, particularly prices for nitrogen (N), potassium (K) and phosphorus (P).

Higher input costs and cash flow concerns struck more than one of the growers who responded to the survey.

“Some producers are being more proactive, others not as much,” they wrote. “There is still a lot of wait-and-see if input costs stay high. Cash flow is probably (the) biggest limiting factor.”

Establishing whether different tillage methods corresponded to sales likelihoods was difficult, in part because growers were more likely to combine different types of tillage methods than to hew strictly to one method or the other.

However, one respondent said their conservation efforts were beneficial to the bottom line.

“The drought reduced our yields about 20%,” they wrote. “With commodity prices where they are, we’re doing OK. By farming regeneratively our non-land out of pocket costs are usually a third to half what one would usually need to spend. So even with runaway inflation, we should not be hurt as much.”

While the broad figures for consumable pre-pay orders appear upbeat, pre-purchase plans for iron are a different story. While 31% of farmers plan to stock more parts than they typically would, most farmers are significantly reducing their big-ticket equipment pre-purchases in all categories, either because of choice, availability or both. As AEI learned in its dealer survey, about 20% of dealers are forecasting measurably more prepaid 2022 parts before the end of the year, possibly a lower number than the farmers since they know the availability situation. 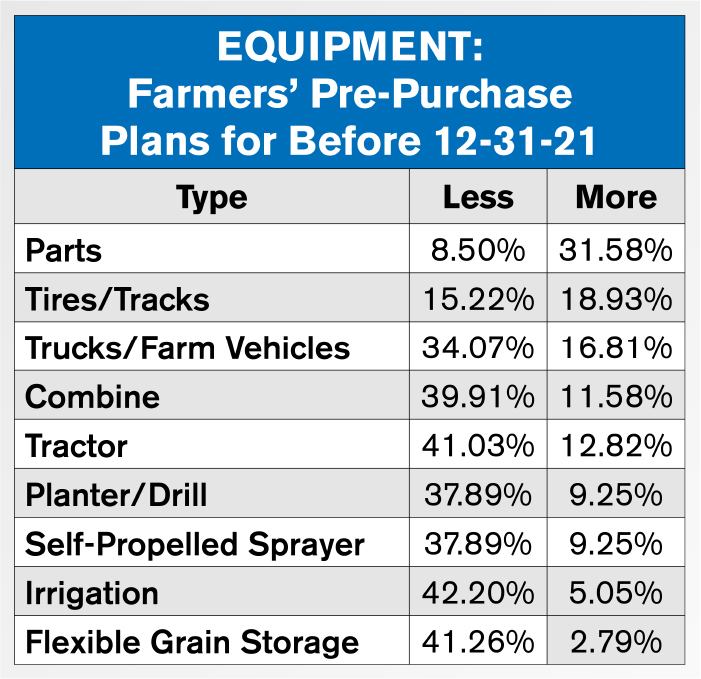 The farmer survey indicated that equipment pre-purchases would be well below last year’s level, though nearly one-third showed that farmers hoped to stock up on parts they would need in 2022.

Deliveries of new seed equipment ahead of the spring planting season were an area of particular concern among dealers, while commenters on the survey did not address the issue.

The dealer survey inquired about 2022 seeding equipment orders, and to what extent dealers expect ordered planters will show up in time for their customers to take to the field next spring.

Fewer than one-third of equipment dealers expect they’ll get all their pre-ordered planters in time for spring use. More than 70% expect some portion of their orders will fail to arrive, with 27% saying as many as 30% of planter orders won’t get delivered in time for farmers’ use.

More than 70% of dealers expect some portion of prior planter orders will fail to show up for spring planting, with more than one-half now expecting 10% or more of their ordered planters won’t arrive in time. The concern is even more critical for some dealers, with 27% projecting that almost one-third or more of their planter orders will fail to arrive in time. 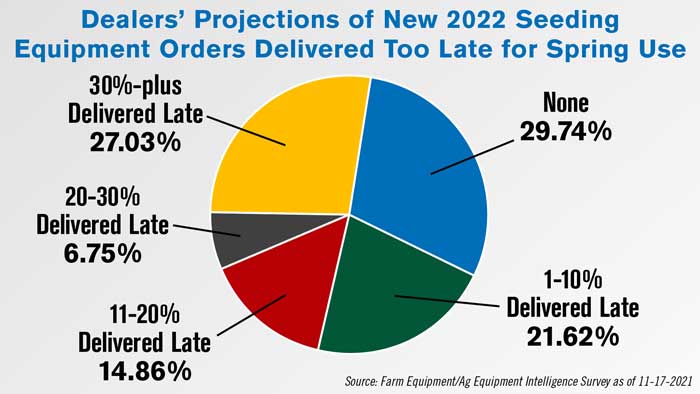 Fewer than one-third of equipment dealers expect they’ll get all their pre-ordered planters in time for spring use. More than 70% expect some portion of their orders will fail to arrive, with 27% saying as many as 30% of planter orders won’t get delivered in time for farmers’ use.

Analysis of the results shows the dealers most concerned about planter orders failing to show up for spring use. In descending order are the dealers (and their primary brands) expecting 20% or more of their orders might now show up:

It remains to be seen how big of a mess it will cause. “Our rule, if machinery was going to be short or delayed, was that we would never let the trade be sold or even taken from the customer until a firm production date could be confirmed,” said Mark Foster, a retired executive from the Birkey’s Farm Store Case IH dealer group. “That really creates anxiety from all parties.”

Foster adds that dealers who didn’t have such guidelines (or veered from them) got “caught” with this year’s harvest. “They had to loan augers and carts and combines as well, racking up more hours than planned due to production delays.”

Not only will there be stresses to sort out for next spring, but also long-lasting impact on the trade and washout cycle delays that it’ll bring.
At least one grower wrote that the high parts purchases were strategic, and driven in part by uncertainty about both prices and availability.

The pre purchase was because of “not only high prices, but availability,” they wrote. “We are preordering parts not only to beat prices, but more so to ensure we get them in time.”

“Uncertainty of tax laws ahead make planning a challenge,” one grower wrote.

Others were a little more cannily upbeat.

“Taxes not a problem,” another grower wrote. “Finally might get to pay some.” No-Tillers May Lose Money on Yield Goals This Year