By Libby Wawzenek posted on November 7, 2021 | Posted in Cover Crops

Indiana no-tiller Carter Morgan considers research and long-term goals to determine which cover crop variety will best support the needs of his farm.

LIKE MANY FARMERS, Carter Morgan relies on crimping to terminate his cover crops. However, unlike some of his peers, Morgan has stopped purchasing variety not stated (VNS) cover crops and has instead embraced the specificity of using the exact variety of cereal rye that meets his needs.

Morgan, who farms 2,700 acres around Cayuga, Ind., and tries to get cover crops on as many acres as possible every year, says this not only allows him to more effectively manage the growth and maturation of his cover crops, but it also means he is saving money on cover crop seeds — a benefit of using variety stated cover crops that caught him by surprise.

“I remember guys [at the no-till conference] telling me I need to plant Elbon cereal rye,” says Morgan. “I would price it, and it was always more expensive [than VNS]. Finally, one guy looked at me and said, ‘Carter, look at your seeds per pound, and you can get your price down.’”

Morgan realized he would actually get more seeds per pound of Elbon cereal rye compared to VNS cereal rye — making the Elbon more cost effective, even though on the surface it appeared to be pricier.

“Once we figured that out, we realized we didn’t have to break the bank to get our same seeds per acre out there,” he says.

Not only that, but by selecting varieties of cover crop that directly support his goals, Morgan can develop a more precise timeline for planting season.

“The right time to crimp cereal rye is after it’s pollinated, at which point you start to get better control,” he says. “You can crimp before, but you’re not going to get a very good termination of your cover crop. As we were looking at that — knowing we’re not going to be able to crimp until essentially the last third of May, and we want to have all of our crop planted ideally a week or 10 days before that — [it became clear that] if we want to crimp and use cereal rye as part of our weed control, we were going to need to change something.

“That’s why we went to an earlier maturing cereal rye.”

Morgan notes the importance of evaluating seed size when ordering cover crops. He didn’t anticipate the significance of that when he first made the move away from VNS cover crops, but it’s proven to be a vital component of his decision making.

“Different seed size is going to change how many seeds we’re actually planting,” Morgan says. He says that while it’s common to think about the number of seeds being planted when discussing cash crops like corn or soybeans, it can also be a consideration for cover crops. 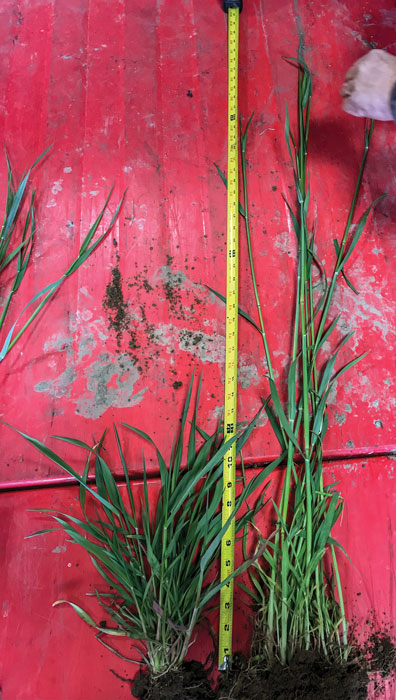 By evaluating seed size in addition to price per pound, Morgan has also determined that it’s more beneficial to use rapeseed instead of radish as a brassica cover crop in his fields. Not only does daikon radish cost more per pound than dwarf Essex rapeseed, but it contains far fewer seeds per pound than the rapeseed.

When he first started experimenting with rapeseed, Morgan used more seeds than he needed. Since then, he’s scaled back quite a bit.

“Now we plant about a third of a pound of rapeseed, which is equivalent to about 47,000 seeds per acre. It’s still more seeds than what’s in a pound of radish,” he says. “Comparing dwarf Essex rapeseed to daikon radish, we can get more rapeseed for 29 cents per acre compared to $1.63 an acre for radish. That saves us a lot of money.”

Morgan says rapeseed is not only cheaper than radish, but it’s also easier to work with. The climate in his location requires farmers to plant radish seeds before Oct. 1, which isn’t always possible, he says.

“If we get an early freeze or a frost and they die out, we’ve wasted that money,” he says.

Rapeseed, on the other hand, reliably overwinters and grows well enough to support planting green.

Morgan cautions farmers to step back and consider the big picture, rather than letting seed cost be the only thing they consider when choosing a variety of cover crop. For example, while he has found that balansa clover is more useful than crimson clover when it comes to crimping, different varieties of balansa have different maturation rates.

“Viper balansa clover is probably maturing earlier than Fixation balansa clover by about 7-10 days,” Morgan says. However, he says Viper is also a bit more expensive than Fixation. “That’s a call you’ve got to make on your farm. Are you willing to spend a little bit more to know you’re probably going to be able to crimp a little earlier? As you start making mixes that becomes really critical. If they’re not going to mature at the same time, your crimping timeframe is not going to work. You need those to mature at the same time.”

Morgan knows that what works for him won’t work for everyone. He stresses the importance of taking time to establish clear goals before moving ahead with cover crop selection.

“What do you really want to do? That’s the first thing you have to ask yourself for your operation,” Morgan says. “What are your goals? Are you trying to crimp and use this as weed control? Is it just erosion control? Is it nitrogen production? Those are the things you have to decide. You need to select your cover crops and your varieties based on those end goals.”

Additionally, Morgan says farmers should consider their location and its quirks. The same variety of cover crop won’t work the same way everywhere, and he advises farmers to find varieties that will serve the needs of their location.