Pictured Above: BIG AND BOLD. The 15-foot Mandako roller-crimper used by Winona, Minn., no-tillers Mike Unruh and his dad, Dave, mounts on a drawbar hitch, which makes for easier trailering down the road. In addition, the large drum can be filled with water for added weight.

Two young growers from Minnesota — a state that has historically been challenging for cover crops. Two different types of planters and roller-crimpers. Two experiences that reinforced the growers’ beliefs in what covers can do for their operations.

Sheldon Luehmann of Lewiston, Minn., and Mike Unruh, just down the road in Winona, Minn., got acquainted when Unruh’s family did custom forage harvesting for the Luehmann family’s dairy farm. Luehmann watched as Unruh, who farms 700 acres of corn, soybeans, alfalfa, and cover crops with his father, journeyed into using no-till and cover crops, while the Luehmann family continued doing full-scale tillage.

Unruh’s father, Dave, got him interested in cover crops back in 2013 when a prevent plant situation resulted in them seeding a cover crop mix on their farm, which was started in the late 1800s. They no-tilled into the cover crop in the spring of 2014.

“I thought my dad was crazy,” says Unruh. “My grandpa thought he was crazy.”

That “crazy” idea paid off. The corn crop that was no-tilled into the cover crop was the best corn on the Unruh farm that growing season.

“My dad started trying other things, like no-till corn into green rye,” says Unruh. “That worked out, and since then, I’ve taken it to the next step.”

Looking to encourage his friend to try some new practices, Unruh would take side-by-side videos of a field that had been chisel plowed next to a no-till field with covers and share the videos with Luehmann.

“The planting itself went really well. We didn’t change any settings on the planter from how it was set for no-tilling and we just went right into the rye…” – Mike Unruh

“We had had a heavy rain, and the plowed field was running with water and there was no water running where the cover crop was,” says Unruh.

The videos were eye-opening for Luehmann, and when he began farming on his own in 2018, he started incorporating no-till and cover crops. In spring 2021, both Luehmann, who now farms 500 acres of corn, soybeans, alfalfa and cover crops, and Unruh planted soybeans into boot stage cereal rye, and roller-crimped the rye at anthesis. It was both growers’ first experience roller-crimping their cover crops to terminate them — but certainly not their last.

Luehmann says that his top two goals for roller-crimping are to reduce herbicide passes and to simply get the ground covered.

“After corn silage, the soil is just so bare, especially in the spring with the thawing and erosion, so just covering the soil and holding it in place was my goal,” Luehmann says. “I also want to get rid of the residual.”

Luehmann adds that the fields on his family’s farm are sloped and highly erodible land, with contours or hills.

“We really do have some very steep fields, but we’re also 10 miles from the Mississippi River, so not all of it’s steep,” Luehmann says. “It’s not easy farming. It keeps you on your toes.”

Unruh says that the rye suppressed weeds, which was one of his goals for roller-crimping, while also seeking to reduce soil erosion.

“My dad and I are sick of seeing dirt washed away and fixing ditches,” Unruh says. “This year, the spring rains didn’t cut any ditches.”

Luehmann noted that the rye seemed uniform, but both growers were nervous about planting green into the rye in the spring. Luehmann planted a non-GMO upright variety of soybeans about 5 days ahead of Unruh, who planted a GMO bush-style soybean variety. 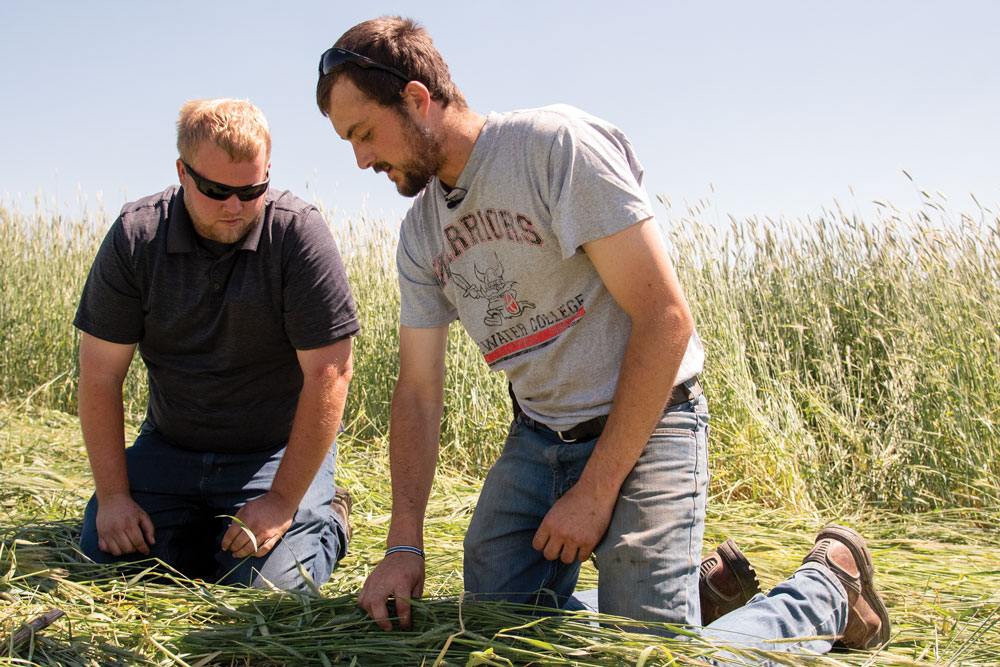 COMPARING NOTES. Mike Unruh (left) and Sheldon Luehmann (right) share ideas on their first experiences with roller-crimping cereal rye 2 weeks after no-tilling soybeans into the green rye. While both farmers saw some rye pop back up after crimping, they were generally pleased with how well the process worked.

“It’s enough to make you nervous the first time doing it,” says Unruh. “My dad definitely thought it wouldn’t work. But the planting itself went well. We didn’t change any settings on the planter from how it was set for no-tilling, and we just went right into the rye. It was all nice and green. The rye was about waist high, about 2 feet tall, and it planted really nice.”

“It just slid straight through,” adds Luehmann. “No issues on the planter whatsoever. People think it’s more complicated than it really is.”

Unruh says one pleasant surprise about planting into the rye was that there wasn’t  any dust, despite the very warm, dry spring.

Once the soybeans were in the ground, they grew faster than either grower expected. Luehmann’s soybeans ended up being a little lankier than Unruh’s.

“The beans were looking for light in that rye for sure,” says Luehmann. “They were 6-8 inches tall. I didn’t really expect for them to do that so quickly. They went straight for the sky and didn’t put any leaves out.”

Two weeks later, they came back, and roller-crimped the rye. Luehmann rented a neighbor’s I&J 3-point roller crimper, while Unruh used a 15-foot Mandako roller-crimper that he was demoing from a local equipment dealership.

“The Mandako has a larger and heavier drum [than the I&J] and has a drawbar hitch which is nice for trailering down the road, vs. the 3-point hitch on the I&J,” says Unruh.

While both Luehmann and Unruh were reasonably pleased with their first experiences with roller-crimping, neither got the perfectly flat kill they were hoping for. Unruh says that at anthesis, the rye was starting to put a lot into the head, and it seemed more like straw, so it didn’t kink as well as he would have liked.

“I imagined the rye would be completely flat,” adds Luehmann. “But I think you have to leave a little margin for error.”

Unruh says his biggest concern was if the soybeans were going to be too tall and possibly snapping them off.

“The beans were looking for light in that rye. They were 6-8 inches tall, went straight for the sky and didn’t put any leaves out…” – Sheldon Luehmann

“I didn’t want to crimp when the beans were coming right out of the ground, because that’s when they’re most brittle,” Unruh says. “But looking back, the way the roller-crimper bridges over the top of the beans, about 5 inches or so, it didn’t really affect them. I was picturing in my head that the beans would just get flattened. But it didn’t do that at all,” he says.

“We found right away when we pulled in and did the first passes that there’s enough rye that holds up the crimper that it doesn’t even kink the beans,” says Unruh. “So, it was fine. I don’t think we stressed the beans at all. Some friends of mine in central Minnesota roll everything flat at first, stressing the beans enough to shorten the nodes and possibly grow a second stem. I read some research that beans actually like stress.”

Luehmann notes that the trial-and-error experiment was a lot of fun, although some might call it risky.

“Some of my soybeans got crimped,” says Luehmann. “I’m sure I killed some — it’s just the nature of the beast. But you’re going to run some over when you spray it anyway, so what’s the difference?”

While neither Luehmann nor Unruh had applied any herbicides on the cereal rye prior to roller-crimping, both anticipated needing to do a pass to fully terminate the rye.

“I had one field that had a really good stand of rye that laid down really flat with the crimper,” says Luehmann. “I have high hopes that I won’t have to spray that field, but it’s a long growing season, so I’ll just have to keep an eye on it.” 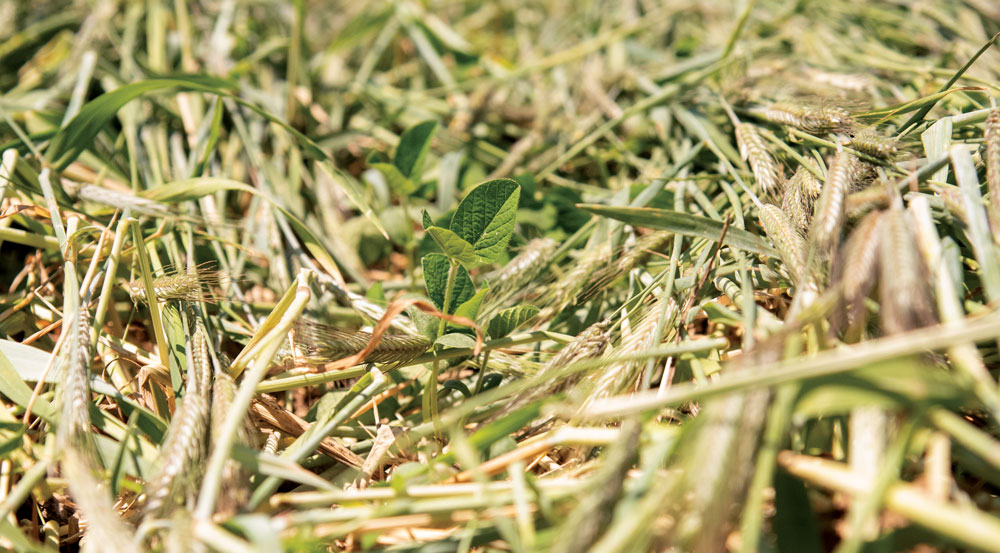 SPRINGING UP. Mike Unruh of Winona, Minn., found his bush-style soybeans were almost completely unharmed from the roller-crimping pass done over cereal rye at the anthesis growth stage.

Unruh notes that there’s also a chance the crimped rye will suppress the usually flush of broadleaf weeds. “I’m thinking we’ll have to do one pass later in the season for any broadleaves that come through. But we’ll just watch. If nothing comes through, it doesn’t pay to do the chemical pass,” he says.

The growers learned a lot from their first experience roller-crimping, and already have ideas on what they’ll do differently next year.

Luehmann says that one thing he thinks he’ll change is using a heavier seeding rate to make a thicker mat of rye that will stay down better after crimping.

Unruh speculates that adding water in the drum of the Mandako for additional weight might’ve helped get a better kill on the rye.

Unruh adds that while he knows the growth stage is important for both the beans and the rye, he says next year, he’ll be comfortable doing his roller-crimping pass if the beans haven’t yet reached the third trifoliate stage.

“I also think I’ll try to do my crimping a little earlier, maybe at the beginning of anthesis, and see if that makes a difference.”

Luehmann says that next year, he’s going to focus on the rye stage and letting the rye mature more before planting. He also looks to ramp up his cover crop usage to more acres, eventually covering all acres with a cover crop.

Luehmann’s advice to other growers is to start small, and as comfort level increases, try more acres with no-till and cover crops.

“Sometimes things don’t work out,” Luehmann says. “Do it again. See if it happens again. Stick with it.”

Unruh agrees that using cover crops is not easy.

“Don’t think you’re just going to throw the seed out there and be done,” Unruh adds. “You have to manage a cover crop like another crop. I really believe in cover crops. I believe in what they’re doing for the soil and how it’s changing it, but you have to manage it. You can’t just walk away from it.”