World Food Prize Winner: Soils Should Have Rights, Too

Growing up on a small farm in India, Dr. Rattan Lal experienced much of the hardship faced by today’s smallholder farmers. His family didn’t have running water or electricity, but he explains, “We never missed it because that was the way everybody lived.”

As a farmer, his father struggled with irrigation challenges and the related issue of saline soil, both of which Lal later realized could be remedied by improving drainage of the land. But it wasn’t until after years of studying that he began to understand and teach the world about the fundamental role of soil.

In fact, a Nobel Peace Prize Certificate and a World Food Prize later, Lal has changed the way we view sustainable soil management and has trodden new ground in what we now call conservation agriculture (CA), an approach that can play a huge role in restoring the world’s neglected soils, capturing carbon and combating food insecurity.

At its core, CA minimizes soil disturbance (which means reducing tilling), provides permanent soil cover and diversifies crop production, all of which can contribute to enhancing biodiversity, reducing water use and improving soil health.

Conservation agriculture plays an important part in how FAO supports small-scale farmers in Africa, Asia, Latin America and the Caribbean. The benefits of this approach are numerous, from increased yields and reduced costs for farmers to healthier soils and greater carbon sequestration. Lal came to understand all of this and has since endeavored to spread the word.

In the 1970s, when Lal was working for the International Institute of Tropical Agriculture (IITA) in Nigeria, he discovered that by eradicating ploughing practices and simply covering the soil with crop residues he was able to produce five tonnes of maize per hectare every season; local farmers could only manage one ton. Yet, for some reason, they still wouldn’t adopt CA practices.

He put this down to a distrust in no-till agriculture. Over 40 years later, FAO and other organizations like the African Conservation Tillage Network (ACT) are scaling up CA practices in Africa with much more success.

For instance, through the project Strengthening coordination, scaling up and governance of Conservation Agriculture in Southern Africa, FAO is increasing the adoption of CA among farmers.

Given that this region is warming at twice the global rate, there is a pressing need to strengthen food systems and increase the resilience of farmers, many of whom practice either small-scale or subsistence farming.

To do so, the project is boosting collaboration between governments, NGOs and development agencies, meaning that FAO and its partners are better able to document and share CA knowledge and best practices with farmers.

A recent example of such a collaboration comes from Zimbabwe, where FAO and the NGO, Foundations for Farming, have been supporting the government in its ambitious target of training 1.8 million farmers in CA.

“I see no reason why Africa cannot become the breadbasket of the world,” Lal says. 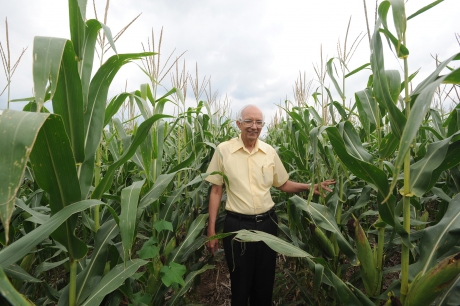 Conservation Agriculture advocates leaving crop residues on fields, creating an organic cover that gives nutrients back to the soil. Rataan Lal believes that “people are a mirror image of the soil they live upon.”

Over many years, soils have been neglected: monocropping and the improper use of chemicals have depleted the essential nutrients and microbes found in healthy soils. To reverse this trend, Lal insists that farmers should first manage soil fertility through organic matter.

“Farmers don’t return what they take away and consequently soils are degraded. People are a mirror image of the soil they live upon: their health is also equally affected.”

When it comes to land use, he insists that we have more than we need – we just don’t use it properly.

Although he admits that soil and CA alone will not offset GHG emissions, “Restoring carbon in soil and trees is the lowest hanging fruit and has many core benefits: food and nutrition security, improved water quality and greater biodiversity.”

“If we employ science-based practices, no-till, cover cropping and CA,” he says, “agriculture has to be a solution to climate change.”

Ultimately, Lal believes the role of soil is far too fundamental to ignore.

“Soil is a living thing: 25% of all biodiversity is in soil,” he says. “And like any living thing, soil should also have right to be protected, restored and managed properly.”

Rodale Institute Launching Regenerative Ag Center in Parma, Italy: In the land just outside of Parma, Italy, 6 acres are dedicated to a carbon-neutral village, which includes office space, labs, a scientific garden, a bistro, and more. This may sound like an ideal getaway, but for Davines Group, an international certified B Corp founded in 1983, it’s home.