Could Clover be ‘Holy Grail’ of Arable Farming?

Growing a living mulch under cash crops could eliminate the need for artificial fertilizers, cut costs and boost farm productivity.

At least that’s the principle behind ongoing trials of the technique, says The Scottish Farmer magazine. It utilizes the ability of clover to fix nitrogen out of the atmosphere and enrich the soil without the need for application of manufactured nitrates. Clover could also greatly reduce the need for plowing and limit the release of soil carbon.

The magazine reports that a team of six farmers is now trialing crop production with a permanent cover of clover underneath. The key question is whether the plant can cohabit under a crop without significantly affecting its yield.

Both conventional and organic farmers are involved in the trial, which is being run through the Innovative Farmers program with the support of Agriculture and Horticulture Development Board in the U.K., the Organic Research Centre and Organic Arable.

“There are two starting points of the group,” said the ORC's Dominic Amos. “Some are already practicing long-term conventional no-till and are looking to reduce chemical inputs, while others are established organic farmers looking to reduce tillage. Both farming systems can learn from each other.”

Farmer Clive Bailye is involved in the field lab and hopes using living mulch will allow him to eliminate synthetic fertilizers. 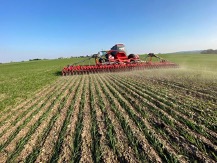 Clive Bailye drills clover as a 'living mulch' foundation for a cash crop on his farm in the U.K.

“I’ve never really felt able to go fully organic,” Bailye says. “Without livestock in my system we’ve never been able to facilitate that circular farm approach for building soil fertility, as I don’t want to go back to cultivation to control weeds. So, to find out how we can do organic no till, without livestock, is like the holy grail of farming.”

Contract farmer and no-till specialist James Alexander has been trialing the living mulch over both conventional and organic land. He hopes the mulch will reduce weeds and add fertility, and thereby eliminate the need to regularly plow cultivate and roll.

“Currently we have to take one third of the organic land out of production every year for clover leys, so we’re losing a lot of productivity,” Alexander says. “If the living mulch works though, we could drill directly into it.”

So far the living mulch on his organic trial is going well, The Scottish Farmer reports.

“The organic plot is looking really good, and there are no weeds in it. There was a very slight increase in barley yield, which was probably a bit down to the clover. At the moment we’ve got oats in the clover and the crop is looking better than on the conventional land,” Alexander says.

Conservation Practices Working Across the Globe

The Cornell Conservation Agriculture Group recently shared summaries of several conservation agriculture studies overseas that show these principles can be put to work anywhere in the world and be successful.

Researchers at Punjab Agricultural University in Indian studied the effects of tillage, crop residues and green manure on soil carbon pools and hydrolytic enzyme activity in a sandy loam after five cycles of the rice-wheat system (RWS).

Results showed that PTR with wheat stubbles retained plus GM and ZT wheat with rice straw retained significantly increased all the carbon pools and hydrolytic enzymes except phenol oxidase and peroxidase activities.

The carbon management index under ZTW retained was significantly higher than zero-till or conventional till wheat without residue. The study showed that adoption of PTR with 25%-anchored wheat stubbles retained plus GM in rice followed by ZTW in wheat was the best crop production strategy for enhanced carbon pools.

During the first years of no-till, the soil is prone to compaction due to the poor structure, missing ploughing activities, and passage of tractors and machinery, thus favoring surface runoff and soil erosion.

Little information exists about the effect of no-till when applied during the transition period from conventional to conservation agriculture. This study at the Padova University Experimental Farm, in northeast Italy was aimed at analyzing runoff and soil erosion in a non-tilled field in comparison with a tilled field during the transition period.

Runoff was monitored during two sampling seasons: from May to October 2017 and May to September 2018. Runoff water volume was measured at each rainfall event, and the amount of sediment was quantified by drying the runoff samples.

Overall, no-till was found to be beneficial in reducing runoff and soil erosion during the transition period. In non-tilled soil, runoff volumes were reduced by 58% compared to the tilled plot.

No-till practices resulted in reductions of over 50% in runoff volumes and 50-95% in sediment losses, and also decreased sediment concentration by 58% compared to the tilled plot.

A 16-year study in Hungary looked at the effect of conservation tillage (CT) on run-off, soil loss and soil in large plots and compared that with plowing tillage (PT).

The difference between PT and CT was significant for mean annual soil erosion, with values of 1.2 and 0.08 tons per acre, respectively. Researchers concluded the use of CT enabled the maintenance of a major fraction of precipitation on arable land, and consequently, soil loss remained an order of magnitude lower than its tolerable value.

Using Crimson Clover as a Cover Crop: Crimson clover has many benefits that can be an asset to a farming system.

Clover Covers Offer More Than Just Nitrogen: Several no-tillers discuss how they’re working out the kinks of using clover cover crops and raking in the benefits in their no-till fields.