What's Been Learned About Interseeding Cover Crops into Corn and Soybeans

With the short-season available for growing cover crops after corn harvest, interest in interseeding cover crops into corn and soybean crops has increased in recent years.

A few years ago, we wrote an article sharing what was known about interseeding cover crops. Since then, we’ve learned the following  information from two interseeding efforts: Soybean Management Field Days and a partnership between The Nature Conservancy, Upper Big Blue NRD, Nebraska Extension, 11 farmers, NRCS and Kellogg’s.

In corn, we’d recommend aiming for V4 (four leaf collars). From our experience, the canopy may close too quickly when interseeding at V5-V6. A Michigan State study found no yield loss due after V2.

For soybean, aerial interseeding around senescence (leaves turning yellow) is one option. From plots interseeded with a drill at V3 in 2020, there were some challenges that will be discussed in the next section. This year we will be trying interseeding at planting through V2. 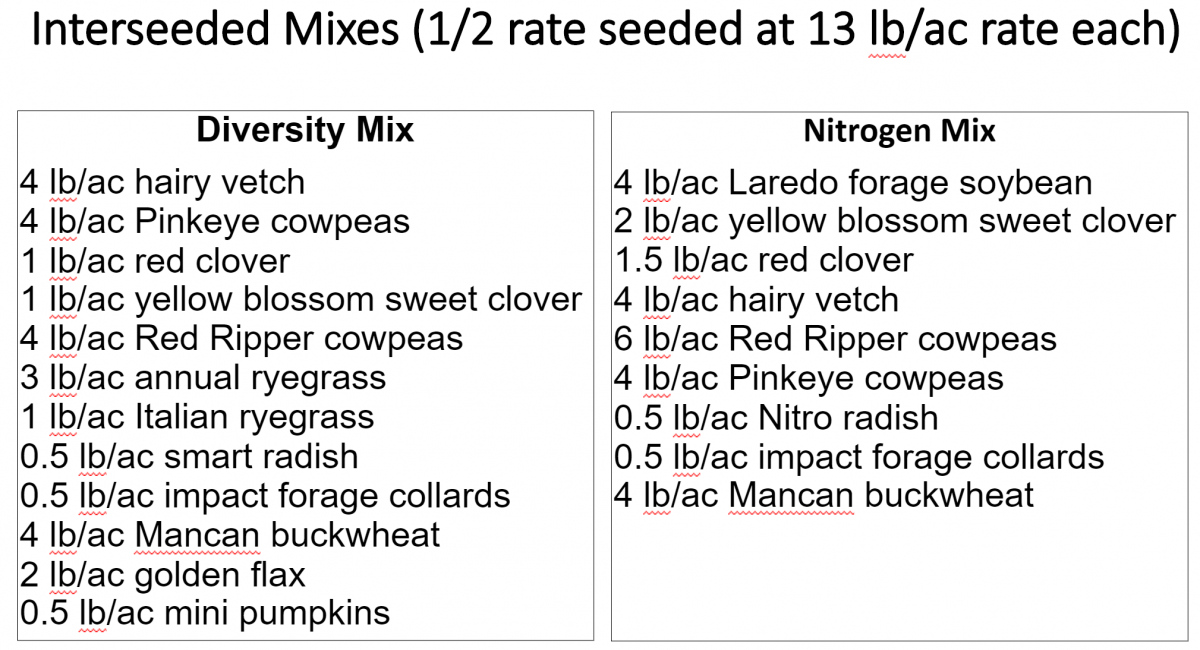 In corn, we’ve tried multispecies mixes because of the growers’ and partners’ goals. These goals included increasing diversity with multiple species and testing what came through different herbicide programs. We found the first species to emerge were the buckwheat and cowpeas.

The farmers liked the species that provided more growth in the understory of the corn canopy, such as the annual and Italian ryegrass, collards and other brassicas, and buckwheat. Cowpeas grew up to the corn tassels and provided the greatest biomass. Most of the species went to seed. Cowpeas, forage soybeans, and sweet clover were fixing nitrogen in season.

One of the diversity benefits noted was the flowering flax and buckwheat attracted many beneficial insects to the field. Pests like grasshoppers ate the covers in the interseeded strips and, from observation, appeared to leave the corn alone. Grasshoppers were observed to feed on corn leaves in the no cover crop check strips.

In soybean, wheat and annual ryegrass was planted in the Soybean Management Field Day locations last year with some success. The cover crops were interseeded at the V3 growth stage on soybean. Wheat had some establishment before canopy closure, but the annual ryegrass had poor establishment for these studies.

We think this may have been related to the difference in seed size between wheat and annual ryegrass and the ability of the air-seeder to effectively seed both species given our equipment settings.

The most growth occurred often if the cover crop row was interseeded in the center between the two soybean rows, as it received the most sunlight prior to canopy closure. This year we’re considering testing wheat plus red clover for the fields that will be interseeded from planting through V2.

One year of broadcast application with a Haggie and also two years of drilling cover crops with the Penn State, Hinniker, or homemade interseeders have been tried.

Emergence of cover crops has occurred with both broadcast and drilled interseeding in our studies, but the drilled fields have established more consistently due to better seed to soil contact.

Matching a herbicide program with interseeded cover crops is often the difficult part of interseeding.

Perhaps ideally (unsure if this is even realistic yet), a cover between rows that aids in weed control, adds nitrogen, provides fall biomass for winter annual weed suppression and/or grazing, N capture, erosion control, and has good spring regrowth to aid in weed control, could result in a system where herbicides may only need to be applied in a band over the crop rows. 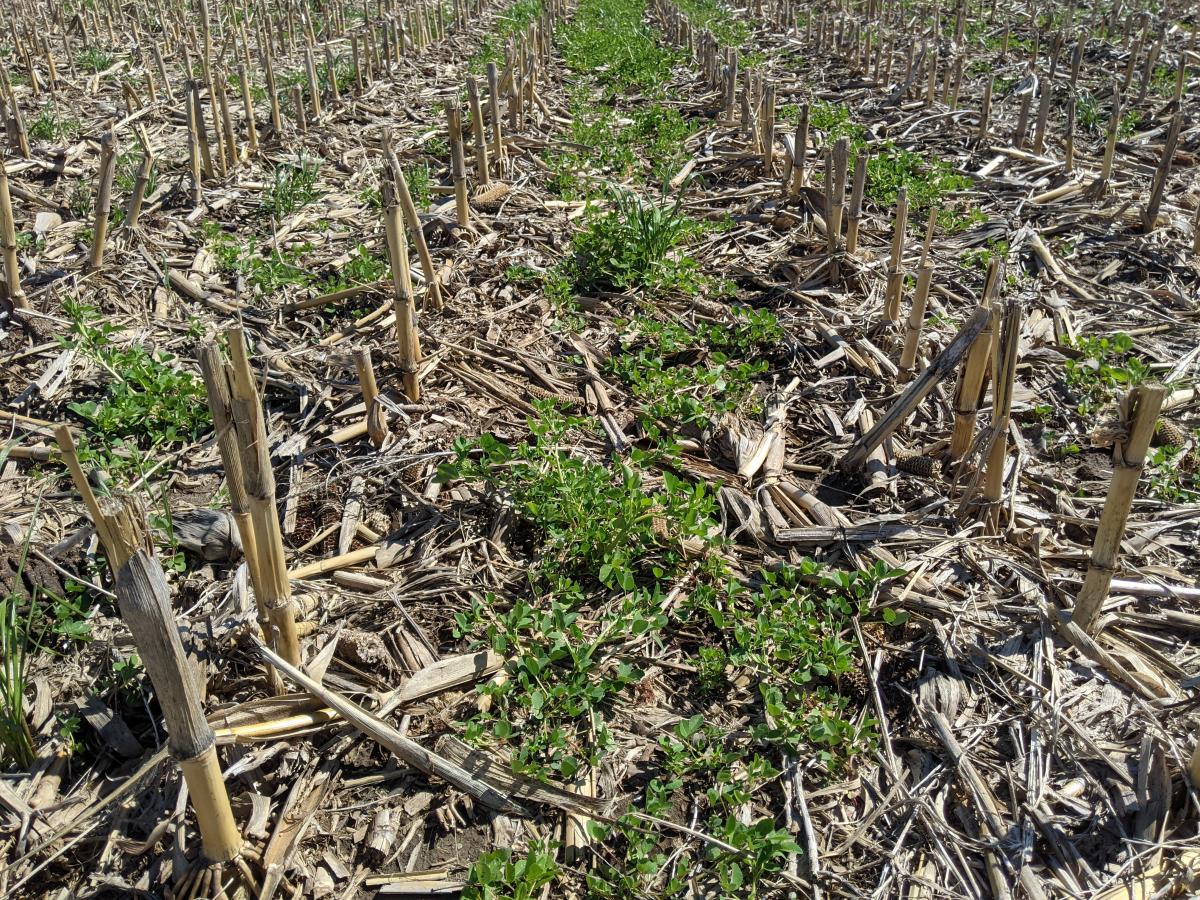 Figure 2. Survival of annual ryegrass, red clover, and hairy vetch in May 2021 after being interseeded into V4 corn in June 2020.

In the wet year of 2019, Callisto-type (Group 27) products, applied post- (V4-V6) prior to interseeding, did their job and kept re-activating. This led to cover crop injury and death in one field. In 2020, it was suggested to use no residuals in post- apps. Instead, most applied a pre- with residual followed by a post- of only glyphosate or glufosinate prior to interseeding.

The July 9, 2020 windstorm causing plants to greensnap and/or bend caused problems with the canopy opening up. Weed control in addition to cover crop biomass growth became a problem in these fields in competing with the corn crop. It was an unpleasant learning experience for us, yet the growers were kind and remained optimistic to try again this year.

This year, for corn, some growers are sticking with last year’s program because it worked well for them, particularly in no-till with heavy residue. Another thing some may try is to apply a pre- with residual, interseed at V4 and then upon 1-2 inches growth of the covers, apply Dual II Magnum or Outlook (no grazing restriction with Outlook) to provide residual for aiding in weed suppression.

One farmer who applied full generic Lexar pre-plant in some fields and did split app in others in 2020, still saw cover crop growth and emergence from the split applied. The cover crop growth was just stunted and thin compared to the fields where he applied the full rate pre-. He’s testing herbicide programs this year.

For soybean, weed control can be a challenge; adding interseeding to the mix may add risk for controlling weeds. For those who wish to plant and interseed at the same time, our plan is to apply a burndown immediately prior to planting and interseeding (if they hadn’t applied an early pre- already), allowing the cover to get 1-2 inches tall and then apply a Group 15 chemistry.

The other option we’re trying is going with their pre- with residual followed by interseeding at V2 and application of Group 15 herbicide after cover reaches 1-2 inches of growth. We also have a few growers who will be planting soybean green into rye and then interseeding after rye termination.

For the soybean management field days, we will test using banded compared to broadcast applications of a pre- herbicide before interseeding at V1-V2, followed by a post application with a group 15 herbicide following cover crop emergence.

Interseeding cover crops has been a learning process for us and our cooperating farmers! While not everything we’ve tried has worked, we have learned from failures in addition to successes. We hope this information is helpful to those who are also trying this method of cover crop establishment.

Yield, biomass and other results can be viewed in a companion article which will be shared next week.