Earlier this year, No-Till Farmer received word that Herbert Bartz, pioneer of no-till systems in Latin America and a founder of the Brazilian Federation of No-Tillage and Irrigation (BFNI), has passed away. The following information was shared by BFNI.

Bartz was hospitalized in Santa Casa de Arapongas, a nearby town of Rolândia where he lived, in northern Paraná, Brazil. He died of complications from pneumonia during the early hours of Jan. 29, 2021.

Bartz was honored by No-Till Farmer editor Frank Lessiter as one of the “40 Legends of No-Till” in 2011.

Born in Rio do Sul (SC), Brazil on Feb. 14, 1937, the son of German immigrants, he spent much of his childhood and youth in Germany in the midst of World War II. He faced famine and survived the terrible bombing of the city of Dresden, where he lived in February 1945.

When he returned to Brazil in 1960, he settled in Rolândia, at Rhenânia Farm, alongside his father, Arnold, and his brothers. He became a farmer.

He was disgusted with all the difficulties that farmers were exposed to. Crop failures, indomitable climate, torrential rains, severe erosion. Productive land and soil fertility going into the rivers.

The tipping point was in 1971, when after a storm, umbrella in one hand and flashlight in the other, he saw his land going down the hill out of control. He traveled abroad looking for solutions and came back convinced that the solution was to plant without plowing and harrowing. Do “No-Tillage” or “No-Till” as they said in the U.S.

Herbert Bartz valued food production, especially because of the rationing experienced in his childhood. In 1972, with an Allis-Chalmers planter that he imported himself, he made the first large-scale planting without plowing the soil in Latin America. Neighbors started saying he’d gone mad.

The practice was so unprecedented that the Federal Police seized all the soybean produced in his first no-till harvest. But Herbert Bartz never quit. He began to extensively share his experience and help spread the no-till system to those who wanted to learn, free of charge.

In the farmers Franke Dijkstra and Manoel Henrique Pereira (Nonô), he found the perfect companions for a great educational journey through the interior of Paraná and other Brazilian states. They convinced many other farmers, even in the 1970s, when the “Earthworm Club” was founded.

Bartz gave numerous lectures in Brazil and neighboring countries, always accompanied by his slide projector, showing images of the benefits of soil conservation.

Thus he continued, finding great allies in science and academia when consistent research on no-till began to be published. Even without a higher education, he taught numerous classes in agronomy courses, especially at the State University of Londrina (UEL), where his son Johann studied and graduated, becoming an agronomist and farmer like his father.

His daughter Marie also studied at the same institution, graduating in biology and becoming one of the world’s outstanding researchers on earthworms. She inherited her father’s love of the soil.

In 1992, after spreading numerous “Friends of the Land Clubs” throughout the country, the successors of the “Earthworm Club” — Herbert Bartz, Franke Dijkstra and Manoel Pereira founded BFNI.

With the help of Johann and Marie, the book O Brasil Possível: a biografia de Herbert Bartz was published, written by journalist Wilhan Santin. Published n 2018, the book describes Herbert’s saga as a farmer. In the text, he eternalized the saying, “nature does not accept bribes.”

Written condolences may be sent to the website of the Brazilian Federation of No-Tillage and Irrigation.

We’ve had a request for no-till technical assistance from a farmer in Mexico, who has planted grain sorghum in an area 40 miles south of McAllen, Texas and trying to incorporate no-till into his farming practices.

“Since it’s our starting point, we’re running into several problems already. The grain sorghum has already emerged and is about 3 inches high,” Esau Leija said in February. “The land, although it is considered as very hot and dry land, it has some moisture in the soil due to a recent rain.

“The weeds are starting to emerge as well, and they are coming out very aggressive. The people here that sell herbicides are telling us to do a very light cultivation to kill the broad-leaf and the grasses. Specially the grasses as there is no economical herbicide for grasses down here for grain sorghum crop.

“They believe that if we let the weeds grow up in about 8-10 days, they will consume more moisture than if we do a light cultivation now and then apply the broadleaf herbicide once the grain sorghum reaches its ideal height.

“There is not much help down here, as everything around us involves conventional tillage. Everyone wants to do mechanical tillage for everything. We want to kill the weeds to conserve the moisture in the ground and the La Niña effect is not going to help much either

“What do we need to do to try to stay close to no-till practices? If we wait for the 8-10 days and let the weeds grow, would they consume more moisture than a light mechanical cultivation that will kill both grasses and broadleaf weeds?

“The herbicide they have here is Crosser by Corteva for broadleaf. Please let us know anything that we can do so that we can try to do as much of the no-till practices.  Once we harvest, will try to implement some kind of cover crop to prevent aggressive weeds to grow during cash crop production.

If you have any suggestions on no-tilling in this area, please send them to esleija@yahoo.com. 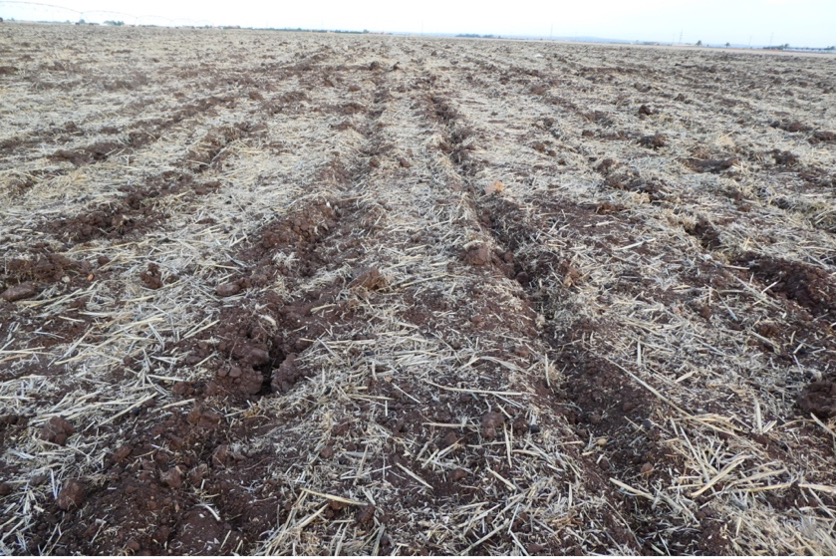 A no-tilled field in Morocco.
(Photo courtesy of ConServeTerra)

ConServeTerra, a new research and innovation project, has been created to tackle constraints to greater conservation agriculture adoption in the Mediterranean area and develop applicable and adoptable sys­tems.

One example of such adoption constraint is the human dimension of soil degradation, which is rooted in the socio-economic, political, cultural and mental environment.

ConServeTerra is designed with the premise that main constraints hampering wider adoption of conservation ag across the Mediterranean region are associated with mental and cultural attitudes, as well as social determinants towards soil and its management.

This “technology transfer” approach disregards the local realities such as communal stubble grazing and occasional necessity of tillage in the absence of expensive herbicides.

As such, ConServeTerra will adopt a demand-driven, scale-appropriate, participatory approach to investigate these systems, moving them from proven feasibility to using successful cases in selected areas.

The project is divided into two complementary parts to achieve wider acceptance and adoption of conservation ag. The first aims to enhance farmers’ knowledge and perception of value of soil and dangers of soil degradation.

The second analyzes the context-specific application of each conservation-ag principle and aims to assure farmers that conservation programs are a viable and sustainable alternative to current practices.

Pilot farming communities will be selected and most of the field trials and field validation activities will be directly done on farmer fields. The on-station experiments will be designed to investigate the detailed, yet relevant, scientific questions.

Farmer groups and associations will take an active role in the design and implementation of field activities, as well as in the dissemination of research results and policy influencing.