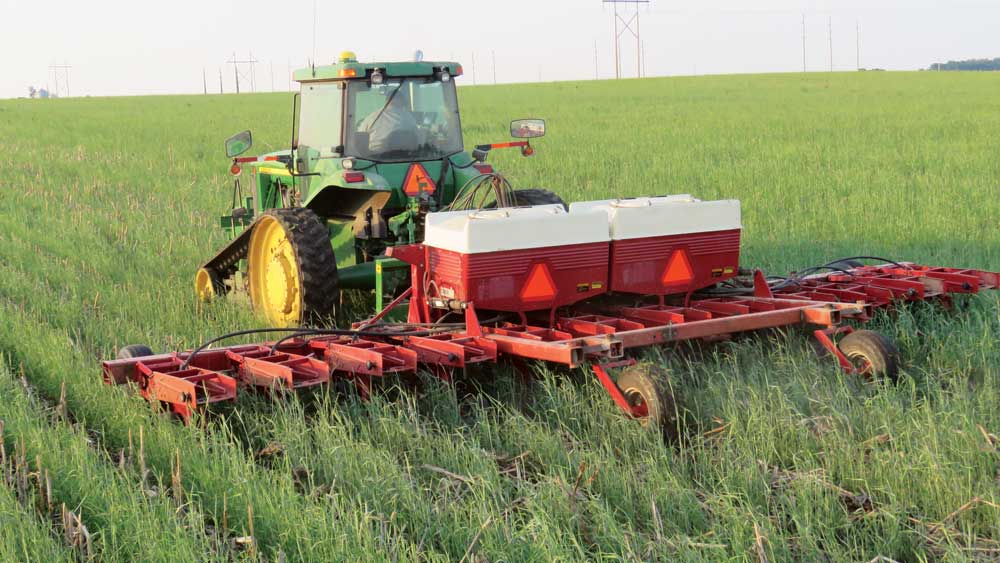 Interseeding is a Process, Not Just a Practice

Building experience is the critical first leg of the journey to interseeding, companion cropping and relay cropping.

Pictured Above: ENJOYING THE JOURNEY. West Union, Iowa, no-tiller Loran Steinlage says the journey to interseeding, companion cropping and relay cropping can’t be rushed but it can lead to big payoffs. One rotation he’s used, with soybeans seeded into cereal rye and then followed by buckwheat has, even with relatively modest yields, provided the same ROI as 200-bushel corn.

When Loran Steinlage hears someone say, “I want to be where you are” when it comes to interseeding, he says it’s a sure sign that person is setting themselves up for failure. It takes patience and practice to set the groundwork.

Steinlage has been tinkering with interseeding, relay cropping and other advanced farming systems on his West Union, Iowa, farm since 2006, though he would call the practices traditional, not advanced. In fact he insists on spelling interseeding ‘innerseeding,’ the spelling used in the literature from the 1800s that he used when researching the practices.

The then strip-tiller started by interseeding…

Premium content is for our Digital-only and Premium subscribers. A Print-only subscription doesn't qualify. Please purchase/upgrade a subscription with the Digital product to get access to all No-Till Farmer content and archives online. Learn more about the different versions and what is included.
KEYWORDS companion cropping Dawn DuoSeed interseeding John Deere CCS planter Loran Steinlage relay cropping

Conservation: Not Just A Means To An End

Once a Naysayer, Agronomist is Now a No-Till Champion