Strip-tillers must plant corn precisely into the strips with fertilizer or risk losing as much as 29 bushels per acre, says Phil Needham, Needham Ag Technologies.

“Successful strip-till systems consist of a fertilizer placement system that can till a narrow, raised strip, plus locate a band of fertilizer where the following corn or soybean row will be planted the following spring,” Needham says.

“However, research has shown that unless tractors are equipped with high-accuracy RTK auto-steer systems, the benefits of the tillage and fertilizer placement are quickly compromised and any benefits of strip-till yield deteriorate,” he says.

Research done at the Irrigation Research Foundation (IRF), Yuma, Colo., in 2007 compared planting corn in the center of a strip vs. 4 inches and 8 inches away.       The offset of the corn planter was intentionally set to 0, 4 and 8 inches from the center of the strip-till zone using a high accuracy RTK system on a John Deere tractor equipped with AutoTrac and an Orthman strip-till rig.

The graph (below) represents average yields from two replications of each strip-till pass. 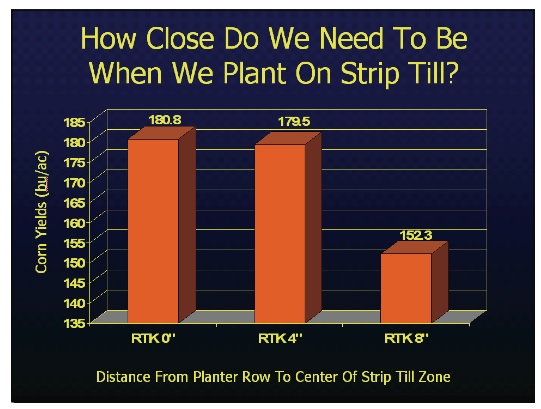 “This trial suggests that if the planted row can stay within 4 inches of the center of the tilled strips, yield benefits can be maintained,” Needham says. “However, if the planter wanders out as far as 8 inches, significant yield loss can occur. In this case, the yield loss was 28.5 bushels per acre.”

Specific benefits of strip-till depend on soil type, drainage, previous crop, rainfall, location and many other factors, he says. The photo (below) shows a side by side trial of strip-tilled vs. no-tilled corn that a farmer in Nebraska conducted. 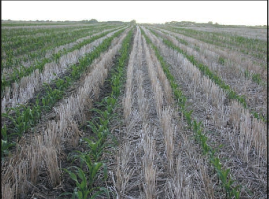 Strip-tilling corn into wheat provided a 15 bushel-per-acre yield response, Needham says, but he puts that into perspective.

"But in my opinion, the no-till area to the right was never set up for success," he says. "No row cleaners were utilized, residue distribution with the combine was poor and no fertilizer was placed within, or alongside the row. In fact, all of those factors are very important for no-till.

"So if these additions could have been included within this comparison, I think the no-till would have performed as well as the strip-tilled regions at a significantly lower cost."

The direct equipment costs, labor and the time required to strip-till are the biggest challenges for strip-till, Needham says. “The regions which could stand to benefit the most from strip-till — Minnesota, Eastern North Dakota, Wisconsin and perhaps Northern Iowa — have the shortest growing seasons and some of the smallest time windows to fall strip-till," he says.

“Soils with high clay content are generally not good for spring strip-till, because the clods created by the strip-till rig will need winter weathering to break them down to form a level strip to plant on,” he says.

“Early strip-till units consisted of ripper shanks, which frequently caused depressed seed zones in the spring and numerous erosion problems on rolling ground,” he says. “Most strip-till units today consist of discs that till a thin strip ahead of planting the following spring and these units appear to be the best option for most soils

"Improvements in GPS guidance have also helped the performance of strip-till by allowing the planter to return directly over the strip-tilled zones.

"Growers need to be aware of where the yield benefits from strip-till specifically come from,” Needam says. “Many of them can be achieved with one pass using a planter if it’s correctly configured.”