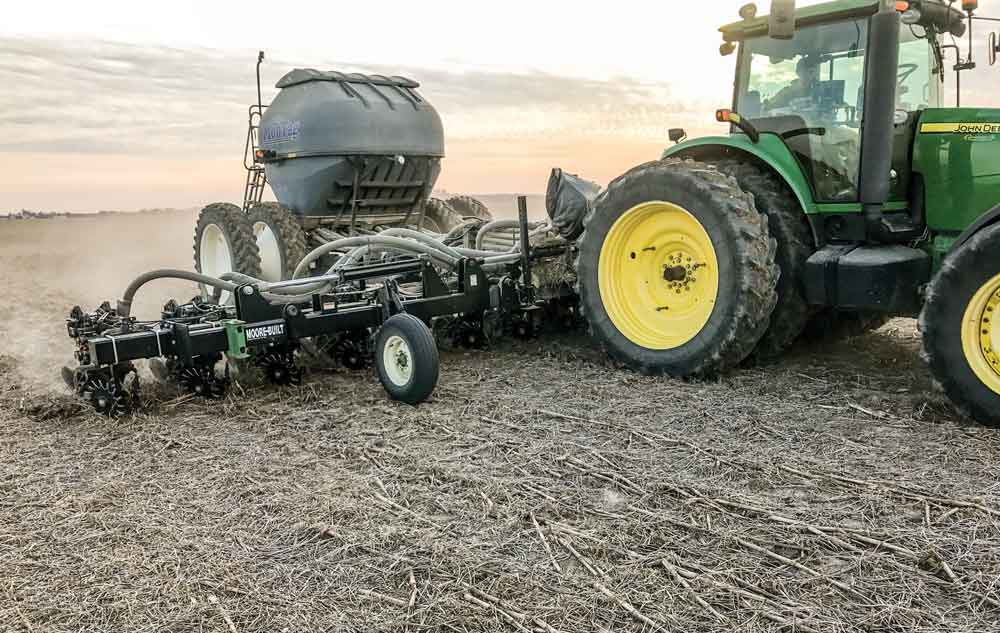 A New Legacy of Improving Economy, Profitability and Best Practices

Trent Profit builds on years of conservation practices to take his family farm to the next level.

Pictured Above: MINIMUM STRIP-TILL. Trent Profit uses a Dawn 6000 minimum disturbance strip-till unit to variable-rate apply a prescription rate of dry fertilizer as determined by soil testing. The disc-style strip-tiller leaves barely a trace in the field compared to the old shank-style machine he originally used

I WAS BORN into no-till and there’s a running joke I wouldn’t know how to drive a tractor straight if I had to thanks to the family’s quick adoption of guidance technology. That’s what happens when you’re brought up by early adopters and farming innovators. Now it’s my generation’s turn to continue pushing the farm along its upward trajectory.

My father, Dale, and Uncle Charles started experimenting with no-till in the 1980s on the northwest Ohio farm my grandfather started in the 1940s. It wasn’t easy. There was no one else in the area to turn to as they were among the first, but they kept trying. By the late ’80s they had gained confidence and all our soybeans were no-tilled into corn stalks.

Our flat, heavy soils made going 100% no-till a formidable challenge. They settled on the compromise of strip-tilling as they’d seen the value of not disturbing the soil. Strip-tilling allowed them to essentially trick their corn seedlings into thinking they were being raised in a conventionally tilled field while most of the field remained untouched.

Once again, they were somewhat alone in their strip-till adventure. There wasn’t much for equipment on the market, so they built their own strip-till…

Premium content is for our Digital-only and Premium subscribers. A Print-only subscription doesn't qualify. Please purchase/upgrade a subscription with the Digital product to get access to all No-Till Farmer content and archives online. Learn more about the different versions and what is included.
KEYWORDS Agracola Farms Dale Profit Dawn 6000 minimum disturbance drill Great Plains no-till drill Trent Profit

Inheriting A Legacy of No-Till