What to Do About Millipedes and Isopods in No-Till Crops

Many states, including Iowa, received a record amount of precipitation in 2019. In fact, the past two growing seasons have been especially wet. Consequently, this has created a number of issues for farmers, including reports of millipedes damaging crops under no-till production in Iowa, which is likely due to a combination of wet conditions and high residue. People that experience millipedes under these conditions frequently ask if insecticides or seed treatments will provide control of these pests. Although millipedes are not insects, they commonly fall under the realm of entomology, alongside many other animals (spiders, centipedes, mites, etc.). We will provide a brief discussion of non-insect crop pests, particularly millipedes and isopods, and potential management options.

Why are no-till fields primarily affected?

One thing that is common among millipedes and isopods is that they need moist, cool environments to prevent desiccation (drying out). No-till production provides this stable environment by leaving residue on the surface and protecting the ground from sunlight, which heats and dries the soil.

Wireworms and grubs are examples of insect pests that are known to cause damage to no-till crops early in the season. Cooler soil temperatures slow germination and seedling growth, leaving seeds and seedlings more vulnerable to injury from pests for an extended period of time.

Like insects, millipedes are arthropods, meaning they have an exoskeleton, segmented body, and paired jointed appendages. However, millipedes differ in that they have two pairs of legs per body segment. Contrary to popular belief, millipedes do not have 1,000 legs; they typically bear 80-400 legs, though some species may have more. They are cylindrical in shape.

Millipedes are saprophagous, which means they normally feed on decaying organic matter. They live in soil or litter, which also protects them from hot, dry conditions that promote desiccation. When millipedes are pests, they ingest the soft and easily digestible parts of plants, such as young seedlings or roots. Damage usually occurs at or below the residue surface. Often, millipedes will feed on decaying seeds or seedlings that have been compromised by another issue, such as environmental conditions, seedling diseases, or other pests.

Millipedes are prey for a number of organisms, including birds, mole rats (and other burrowing animals), crickets, ants, scorpions, assassin bugs, parasitic mites, and ground beetles. There are also nematodes that are endoparasites of millipedes and special fungi that can attack millipede legs to prevent mobility.

Any practice that limits residue on the soil surface can help reduce damage by millipedes. If tillage is not an option, delay planting to avoid cool, wet conditions. Planting under more ideal conditions helps promote rapid growth, which may allow the crop to escape any damage by millipedes in the field. 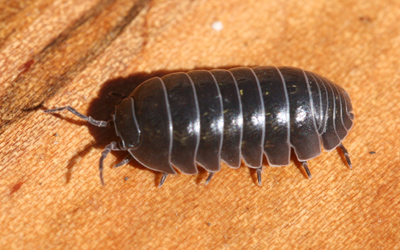 A pillbug. Photo from wiki.bugwood.org.

Isopods are also arthropods in the subphylum Crustacea, meaning they are closely related to crabs, lobsters, and shrimp. Their bodies are elongated, flat, and somewhat arched. Usually isopods have seven pairs of legs and possess swimming limbs. Most isopods are aquatic, but the ones we see are terrestrial. Woodlouse, slater, sowbug, pillbug, and roly-poly are all common names for isopods.

Like millipedes, isopods are soil dwelling and generally feed on dead plant tissue or soil organic matter. They are most active in the spring (when mating occurs) and at night. They are prone to desiccation, so they are less active under higher temperatures, lower humidity, and clear skies. However, increased temperatures in combination with high humidity may increase activity. In general, a moist habitat is required for survival, so isopods seek dark, damp areas such as soil, residue, or cracks in the field.

Typically, isopods are indicators of good soil health; however, they have been observed feeding on seeds, stems, flowers, and leaves of alfalfa, sunflower, cereal crops, and soybean. Isopods can sever the soybean hypocotyl below the apical meristem (growing point), leading to plant death. In Kansas, no-till soybean producers have had to replant soybean fields because of isopod feeding. Isopods tend to prefer decayed tissue of dicot plants because monocot residues are not as digestible and plant defenses generally inhibit feeding on living tissues.

Foliar-applied chlorpyrifos and beta-cyfluthrin may reduce isopod populations in soybean. However, crop residue can interfere with the efficacy of these products because it is difficult to contact the isopods living in and under residue. Isopods do not typically feed in the seed zone, so at-planting insecticides have not been effective. Seed treatments (imidacloprid and thiamethoxam) can be effective, but control is variable. Isopods must feed on enough germinating plants to acquire a lethal dose of insecticide and significant stand loss can occur in that time.

Any areas with high residue may be at risk for damage by isopods. Less soil moisture and shelter availability lead to lower population of isopods in conventionally tilled fields. Tillage every other year has been effective at reducing the amount of time for populations to reach damaging levels. Cleaning residue away from the rows prior to planting and controlled burning of crop residue has not been effective for isopods. Varying planting date by a few weeks (earlier or later) has been effective, but it might not be feasible, especially considering recent weather patterns. In areas with frequent stand loss from isopods, higher seeding rates may compensate for stand loss, but the grower must consider the increased cost of seed and the yield potential of the field. Additionally, consider if a higher seeding rate is better than a potential replant scenario.

No-Till Roundtable: What unanswered questions do you have about cover crops? What more do you want to learn?