How to Combat Compaction in a Soggy Season

Soil compaction happens to everyone and wet weather makes it worse. Here’s what you need to do to get ahead of compaction problems — or correct it once you’ve got it.

According to the National Oceanic and Atmospheric Administration’s (NOAA) National Centers for Environmental Information, the 12 months between July 2018 and June 2019 saw record precipitation in the U.S., with an average of 37.86 inches, which is 7.9 inches above normal. With such brutal conditions to contend with, soil compaction has been a concern for many farmers this year.

While there are other causes of compaction, most of it comes from heavy machinery driving over fields when they are saturated. Studies have shown that compaction can reduce crop yields by 10-20%, depending upon a variety of factors, such as soil type, soil moisture, whether the machinery sports tracks or tires, the type of tire, tire inflation pressure and more.

No-Till Farmer editors asked several industry experts to share how producers can prevent, treat and survive compaction-related issues in 2019 and ensure the problems won’t linger into 2020.

No-till alone helps reduce compaction, simply by virtue of cutting out passes over the field. Where a conventionally-tilled field usually sees 7 or more passes over the course of a growing season, a no-till field can get by with as few as 2 or 3.

“Compaction can happen anywhere if there are wet conditions, because it’s a function of the pore space between the organic matter, the water and the air in the soil,” says Brad Harris, manager of global agriculture field engineering at Firestone Ag. “And when we have water replacing the air molecules in the soil structure and then drive over them, that’s when we induce compaction into the soil.”

Tire ruts are an obvious sign of compaction but in fact compaction isn’t always visible. Jamie Patton, soil scientist with the University of Wisconsin, recommends a simple approach: “A shovel is a very valuable tool for evaluating soil compaction,” she says.

She suggests digging a hole that’s about 2 feet deep “because compaction can occur at the soil surface, but it also can compact at depth.” She looks at soil layers and structure, evaluating the soil aggregates to see if they are spherical or if they’ve been squished into blocks or plates.

In addition, Patton looks at the plant roots to see if they’re growing straight down or if they go sideways, which is a sign they’ve hit a compaction layer they can’t penetrate.

Another useful tool is a penetrometer, which measures resistance as it’s pushed down through the soil layers. Using a penetrometer can be tricky, though, because it will give different results depending upon soil moisture. In wet soils, the lubrication from the water will allow the tool to penetrate the soil with less pressure than would be required in dry soils.

As equipment gets larger and heavier, whether farmers choose tires or tracks and how they use them plays a big role in the compaction story.

In 1987, Caterpillar released the first tractor with rubber tracks, providing a longer footprint, reduced soil compaction and better fuel consumption than was available at the time.

According to Jon Hanson, Midwest regional manager for the ag division of Soucy Track, “During harvest, for example, tracks let you get the crops out of the field with the least amount of damage, so you don’t have to do major rework in the field the following spring. And with these wet conditions, the windows of opportunity to get into the field seem to be getting shorter. Tracked units let farmers get into the field potentially sooner than they can with units on tires.”

But tracks have their downside, bringing higher maintenance costs, slower road speeds and difficulties with turning, according to Ryan Bales, field technician for Titan Intl.

Recent developments in tire technology have delivered new options for producers. The low-sidewall (LSW) tires that are now common on cars are touted as being equally beneficial in many ag applications, providing a larger footprint, better flotation and a smoother ride than their predecessors.

Extra-large LSW tires, like Titan Intl.’s Goodyear OptiTrac LSW 1400/30R46 ‘super singles,’ have been shown to have comparable performance to tracks in terms of traction, slippage and speed.

“Seven or eight years ago, your one option to solve compaction issues was a tracked machine. We’re offering another option now in a wheeled tractor that competes side-by-side with track,” says Bales.

Test results shared by Titan showed that a John Deere 9620R equipped with LSW 1400/30R46s consumed up to 15% less fuel and had an average of 16% less ground-bearing pressure than a John Deere 9RX track machine, at a potential machine cost savings of around $40,000.

For farmers using tires, the most impactful aspect to consider in terms of compaction is tire pressure.

“The most important thing with tires is to make sure you’re running the correct inflation pressure for the load you’re carrying,” says Harris. “You want enough pressure to ensure you’re not damaging the tires. Running ultra-low could cause problems. But if you’ve got too much inflation pressure in the tires, you start transferring more pressure into the ground, causing compaction.”

With standard radial tires, whatever pressure (measured as psi, or pounds per square inch) the tire is inflated to corresponds to the compaction that is being put into the soil. For example, if a tire is running at 20 psi, it is exerting 20-22 psi into the soil. If the actual load only requires 10 psi, operators are putting more pressure on the soil than is needed. 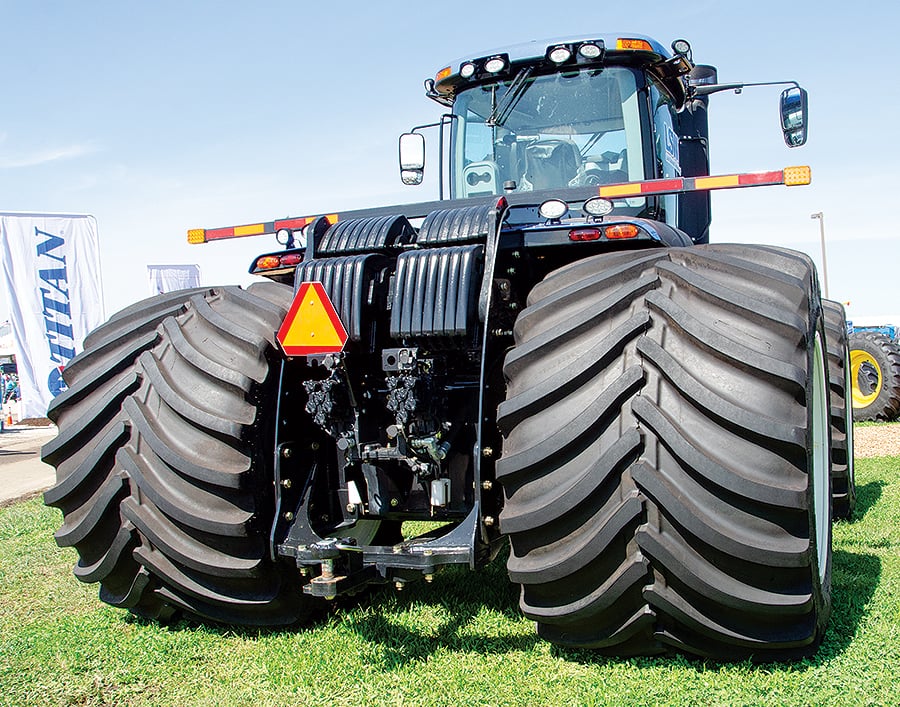 SUPER SINGLES. New extra-wide tires are being touted as a good alternative to tracks, and some studies show they can help reduce compaction by spreading pressure out over a larger footprint.

The good news is that pressures below 15 psi are unlikely to restrict root growth, according to Harris. “At 15-25 psi, you can start to see some crop damage if the soil or weather conditions get extremely stressful,” he says. “When you start getting above 25 psi, you need to start looking at larger tires, using dual tires or consider new tire technologies, like increased flexion (IF) and very high flexion (VF) tires.”

While determining the correct inflation pressure sounds fairly straight-forward, it gets a little more complicated because of the need to take into account the weight on each axle and the speed at which the machine will be operated. But few machines are operated under only one set of conditions.

Jim Enyart, manager of technical services at Ceat Specialty Tires explains, “We farm in the field at slow speeds and the recommended air pressures for ag tires are appropriate for that. But most farmers also drive their tractors down the road and they’re not going at slow speeds — they’re going as fast as they can. At that speed, they don’t have enough air pressure in the tire if the tires are inflated for in-field use.”

Of course, farmers can adjust tire pressure any time they’re moving equipment from the road to the field or vice versa. But research shows many farmers don’t do that. In fact, a survey done by Titan Intl. showed that nearly half of all growers report checking tire inflation pressures only twice per year.

Now, wouldn’t it be great if farmers could just press a button and tires would inflate or deflate to the proper level? Well, the introduction of central tire inflation (CTI) has made that possible, and Bob Recker, for one, is a fan.

Recker, a no-tiller and owner of Cedar Valley Innovation in Waterloo, Iowa, says, “Running your tire pressure too high is like walking in soft soils wearing high heels. People know that and yet they want to go down the road safely without killing their tires. So they end up with high pressure because nobody wants to take the time to check 8 tires.” So he was excited for the opportunity to use a CTI system this spring.

“In two minutes I can check the air pressure and change them. That for me is pretty powerful because it’s going to give me longer life on my tires and I won’t have that compaction variable.”

For farmers who are already dealing with compaction, new tires or tracks won’t do much other than prevent additional problems. Patton suggests that the location of the compaction, along with the producer’s management system, will dictate how they should go about addressing the problem.

“If compaction is at the soil surface and you’re in an area that gets nice cold winters, some freeze/thaw action might help break that up,” she says. “If the compaction is lower in the profile, then planting cover crops with an array of root architectures may help.”

Patton recommends a combination of brassicas and grasses to break through sub-surface compaction and re-aggregate the surface soils. It does take time for cover crops to restore soil health, though, so a long-term mindset is helpful.

As a last resort, Patton says, no-till deep ripping may be necessary to deal with severe cases of compaction.

“If we know we’re getting significant yield reductions due to a plow pan, there are some instances where we may want to consider deep ripping. If we do use that option, it should be followed right up with a cover crop because once those fracture planes are created at depth, we want a root down there to hold them open, to maintain those pore spaces and continue to rebuild the aggregation in the soil surface.”