Forecasts for freezing or near-freezing temperatures when late-planted fields of corn are not yet mature (i.e., not yet at kernel black layer) are naturally concerning to farmers and the grain markets. What are the consequences for grain yield, grain moisture, and harvestability of immature corn damaged by frost or freeze events?

First of all, recognize there is a difference in how the corn plant responds to "simple" frost versus lethal freezing temperatures. Frost can develop on exposed leaves (or cars or rooftops or deck chairs) at air temperatures well above 32ºF (0ºC), especially when skies are clear, humidity is low and winds are calm. Simple frost can damage or kill exposed leaf tissue (but not cars or rooftops or deck chairs). However, "simple" frost usually does not literally kill entire plants. The consensus among many agronomists is that lethal effects of cold temperature on corn occur when air temperatures remain at or below 32ºF for several hours or perhaps only minutes when temperatures dip to 28ºF (-2.2ºC) before increasing again beyond 32ºF.

When a plant experiences damage or death to leaves due to "simple" frost, photosynthesis may continue to limp along if there are any remaining green leaves. Additionally, remobilization of non-structural carbohydrates from the stalk tissue to the immature grain may continue, thus avoiding some of the potential yield loss. 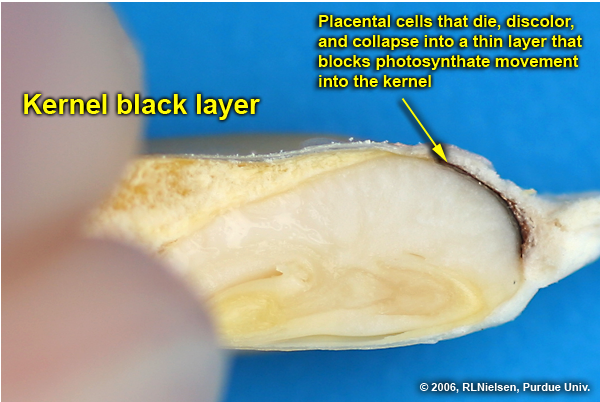 However, when plants experience truly lethal cold temperatures, photosynthesis and its related metabolic activities come to a screeching halt, stopping further dry matter accumulation in the grain. Contrary to some public opinion, kernel black layer will eventually develop in grain of plants killed prematurely by lethal cold temperature or other severe late-season stresses. The reduction or lack of available photosynthate (sucrose) appears to contribute to the death of the placental cell tissue at the tips of the kernels, which will slowly collapse into a thin, black layer (Afuakwa et al., 1984).

Premature kernel black layer development can also occur in response to any extended period of severe stress during grain filling (especially late in the grain filling process) that significantly reduces photosynthesis, including cool (sub-optimal) temperatures in September and October, even before a frost or freeze event. Conversely, this may explain why kernel black layer development occurred later than expected in some late-planted Indiana corn fields in 2019. September 2019 was 4 to 7º F warmer than normal statewide (Midwest Climate Watch, MRCC). Consequently, photosynthetic rates in late-planted fields that were still relatively healthy were likely higher than expected for September and, therefore, greater than usual amounts of sucrose availability may have delayed the onset of kernel black layer development.

Another source that could be used to estimate yield loss due to just the loss of leaves (e.g., simple frost) is the defoliation chart from the National Crop Insurance Services corn hail loss instructions (reprinted in Klein & Shapiro, 2011). That reference suggests that 100% loss of leaves at soft dough, dent, and nearly mature (which I interpret to be half-milkline) growth stages would result in yield losses of 41, 23, and 8%, respectively.

In addition to outright physiological yield losses, damage by "simple" frost or lethal freezing temperatures can cause other problems for corn harvest, drying, and storage.

One last comment... When freezing temperatures are accompanied by snow, that adds layers of complexities to the problem. Large amounts of wet, heavy snow can literally bring a standing corn crop to its knees, if not completely to the ground, especially when coupled with strong winds. Obviously, this creates challenges in harvesting the downed corn later. Further drydown of immature grain is also compromised when ears are laying on or near the soil surface. Kernel moisture loss on plants that remain standing after a snow storm will continue to occur slowly at rates dependent on temperature, sunshine, and humidity. In worst case scenarios where a corn field remains unharvested throughout the winter, there is evidence from Wisconsin (Lauer, 2010) that grain drydown will continue slowly throughout the winter months.

Injury Symptoms From Freeze Damage to Wheat: What to Look For?