Scout Now to Stay Ahead of Cereal Leaf Beetle Infestations

Native to Europe and Asia, the cereal leaf beetle has made inroads throughout much of eastern North America, the midwest, and even Canada. The adult females have a long egg-laying period of 45-60 days, so the larvae can be present and damage crops for a significant period of time. 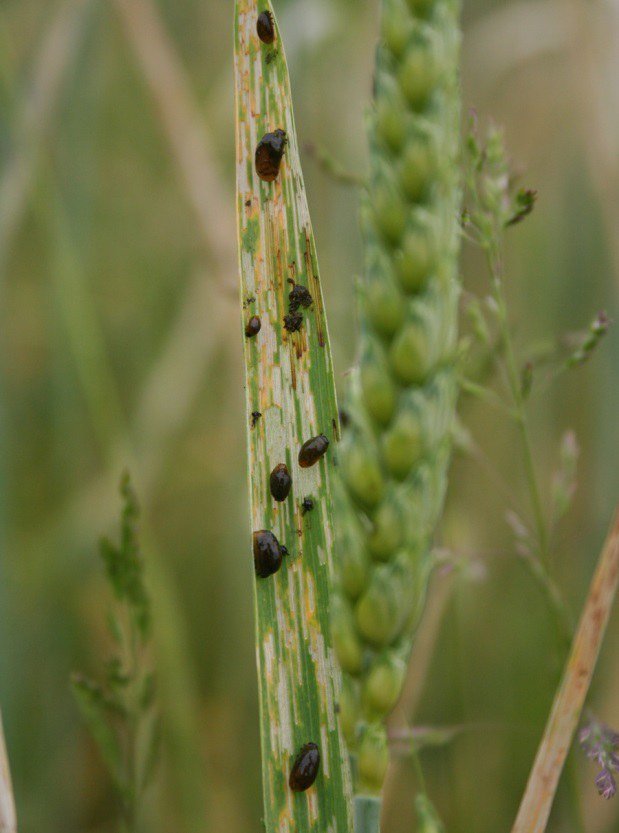 This pest is typically found in wheat and oats, but occasionally feeds on other small grains and grasses. Older larvae feed on the tissue between leaf veins, skeletonizing the leaves and making them appear white. Fields with heavy infestations may have a “frosted” appearance. Infestations are difficult to predict and can be very patchy, so scouting is key to identify local populations that might need to be managed.

Cereal leaf beetle larvae can be mistaken for slugs because they can look small, dark and shiny, but if you look closely and see legs, you are not dealing with slugs. Moreover, slugs tend to be nocturnal, so slimy creatures out during the day in small grains have a good chance of being cereal leaf beetle larvae.

If young larvae are detected at populations exceeding the economic threshold, cereal leaf beetle is easily controlled with insecticides. However, larger larvae are more difficult to control and cause more damage, particularly if they feed on the flag leaf. Damage later during head fill does not appear to be that significant.

Insecticide treatments are warranted if populations exceed the economic threshold of one larva over 0.13 inches long per stem over a field or a portion of a field. See our cereal leaf beetle fact sheet  for more details on their life cycle and some images of adults, larvae, and their damage. For insecticide options, please consult Penn State’s Agronomy Guide.