CEDAR RAPIDS — The Eastern Iowa Airport, one of Linn County’s largest farmland owners, wants to improve water quality and is starting with its own 2,000 acres.

The Cedar Rapids Airport Commission will require farmers who lease land from the airport starting next spring to switch to no-till planting and grow offseason cover crops — practices shown to reduce erosion and fertilizer runoff.

Airport leaders also will gather data on crop yields, soil health and water quality to share with other Midwest airports, many of which also own farmland.

“We’re going to push that out so we can hopefully demystify that conversation and inspire others to make the leap of faith,” Airport Director Marty Lenss said Thursday at the EntreFEST conference. He presented to about a dozen people in the Innovator Track at the two-day conference in NewBo.

The airport also is preparing to launch Wings 2 Water, a crowdfunding program that seeks to tap the airport’s 1.2 million annual travelers to help pay for local water quality projects. Eastern Iowa travelers could round up their airport coffee purchase or feed pocket change into “parking” meters, Lenss said.

Donors will be able to go online and pick which water quality projects get their money.

“We’re going to launch it in Iowa,” he said. “Once we get it going and dollars turned out, we’ll spin it off in the airport arena.”

Lenss’s ultimate goal is for airports in states along the Mississippi River to join the program and possibly get a major airline to help reach more passengers.

Lenss was inspired by the Good Traveler program, a carbon offset program started in 2015 in San Diego that allows passengers to purchase credits to offset the carbon emissions produced during their flights.

But Lenss was looking for a way the Cedar Rapids airport could improve water quality, since the airport is at the highest elevation of the Cedar River and Iowa River watersheds. 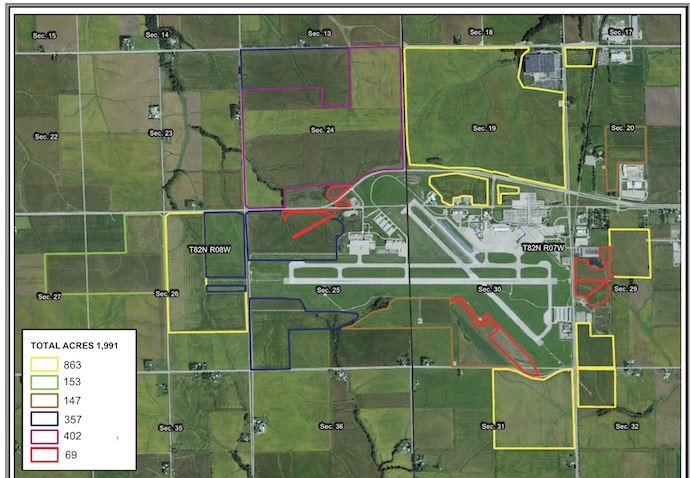 The airport has been working with five farmers who lease land from it to prepare for the switch to no-till and cover crop growth, spokeswoman Pam Hinman said.

No-till farming is when farmers do not plow their fields after harvest, leaving crop residue in place to reduce erosion and slow fertilizer runoff. Iowa had about 7 million acres of no-till in 2012, according to the most recent U.S. Department of Agriculture Census of Agriculture.

Cover crops — mostly rye and oats in Iowa — are grown over the winter to protect soil from erosion, break up compacted soil and absorb nitrate and phosphorus from fertilizer so less runs into waterways.

Most cover crops are killed off with herbicide before spring planting of corn and soybeans, but some farmers harvest their cover crops for profit. Iowa has an estimated 880,000 acres of cover crops this year, Iowa Learning Farms reported.

The airport commission already has implemented some conservation practices, such as improving grass waterways, halting fall fertilizer application, working with Iowa State University to plant prairie strips and growing miscanthus grass to be burned as fuel by the University of Iowa’s power plant.