For the past 3 years, researchers from the University of Nebraska-Lincoln (UNL) and University of Wisconsin-Madison collected survey data from producer soybean fields planted in four growing seasons (2014-2017) in 10 states in the North Central region of the U.S. — Wisconsin, Michigan, Nebraska, Illinois, Indiana, Iowa, North Dakota, Ohio, Kansas and Minnesota.

Click here to download a summary report showing soybean yield and management practices in farmer’s soybean fields in the North Central U.S. region and a detailed analysis of the yield-limiting factors in each state.

Analysis of farmer data can help accelerate the rate at which best management practices are identified and adopted by farmers for a particular soil-climate. The U.S. is the largest soybean producer (35% of total global production), with the North Central region accounting for 82% of total U.S. soybean production. 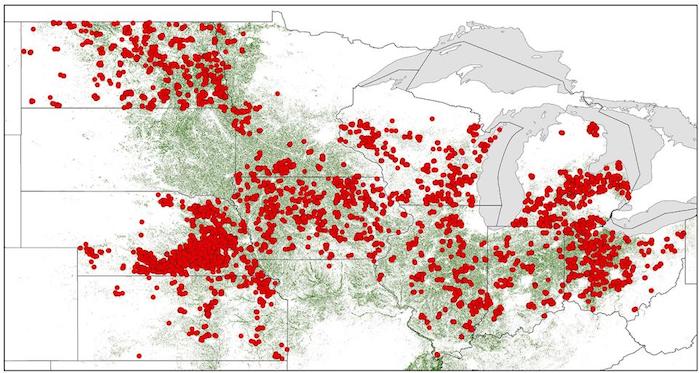 During the past 3 years (2016-2018), the researchers conducted a project funded by the North Central Soybean Research Program (NCSRP) to identify the key factors that preclude soybean farmers from obtaining yields that should be potentially possible on their respective individual farms.

They collected data from more than 9,000 fields planted with soybean across the North Central region, representing 600,000 acres.
Analysis of farmer survey data using advanced statistical methods and a spatial framework allowed researchers to identify the most critical yield-limiting factors for an agricultural area that includes 50.4 million acres planted to soybean, which, in turn represent 57% of U.S. soybean area.

For example, in Nebraska, researchers found the average yield gap — the difference between potential and current yield — in Nebraska ranged from 11% in irrigated fields in south-central Nebraska to 21% in dryland fields in eastern Nebraska.

Planting date is the most consistent management factor explaining the current yield gap in the state. Delay in planting date after late April leads to a yield penalty of about 1/4 bushel per acre per day in both dryland and irrigated fields (Figure 2). Foliar fungicide application and tillage were other practices explaining the yield gap.