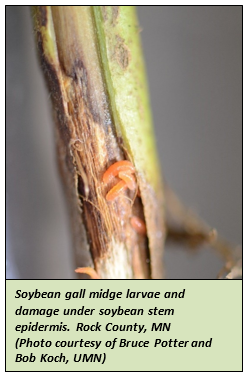 The bright orange larvae can be found inside the stems or pith near the base of the plant. The orange larvae look similar to the wheat midge larvae that commonly infest wheat in North Dakota.

Some entomologists feel that the soybean gall midge is associated with injury from hail or diseases, such as Sclerotinia white mold. Species identification is being conducted from larvae collected in infested soybeans in other states.

As far as we know, there is no soybean gall midge in North Dakota yet. However, if you see or know of any orange larvae in the base of soybeans, please contact Extension Entomology. It is unknown if this insect will become a new economic pest of soybeans in the future and if it will be discovered in North Dakota.