Depending on the year, Indiana’s corn crop typically enters the critical flowering stages of pollen shed and silk emergence sometime between late June to late July, says Bob Nielsen. Success or failure during this period of the corn plant’s life greatly influences the potential grain yield at harvest time.

As important as this process is to the determination of grain yield, it is surprising how little some folks know about the whole thing. Rather than leaving you to learn about such things “in the streets,” I’ve developed this article and the accompanying one on silking that describe the ins and outs of sex in the corn field. 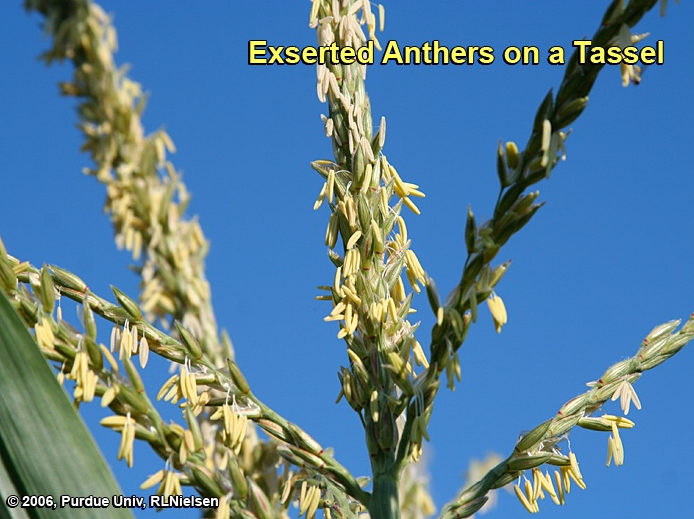 Once upon a time, that exact developmental sequence may have been true, but today’s hybrids tend to behave differently. It is not uncommon for silk emergence to begin not only prior to the last tassel branch appearing from the whorl, but also prior to the exsertion of anthers and pollen shed.

Plant height reaches its maximum at or shortly after growth stage VT as the final stalk internodes complete their elongation. The corn plant is most vulnerable to hail damage at growth stage VT because all of its leaves are exposed.

Complete (100%) leaf loss at growth stage VT will usually result in complete (100%) yield loss by harvest. Even if pollination results in successful fertilization of the ovules, entire ear shoots will usually die because so few leaves remain to produce the necessary carbohydrates (by photosynthesis) to complete grain fill. 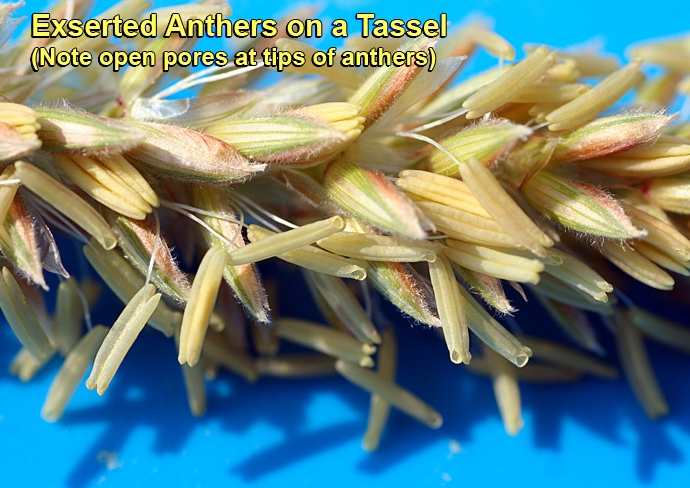 Approximately 1,000 individual spikelets form on each tassel and each one bears two florets encased in two large glumes. Each floret contains three anthers. An anther and its attached filament comprise the stamen of the male flower. The anthers are those “thingamajigs” that hang from the tassel during pollination.

Under a magnifying lens, anthers look somewhat like the double barrel of a shotgun. Do the math and you will realize that an individual tassel produces approximately 6,000 pollen-bearing anthers, although hybrids can vary greatly for this number.

As these florets mature, elongation of the filaments helps exsert the anthers from the glumes. Pollen is dispersed through pores that open at the tips of the anthers. Pollen shed usually begins in the mid-portion of the central tassel spike and then progresses upward, downward and outward over time.

Anthers typically emerge from the upper floret of the pair first, while those from lower floret typically emerge later the same day or on following days. Spent anthers eventually drop from the tassel and are sometimes mistaken for the pollen when observed on the leaves or ground.

The yellow or white “dust-like” pollen that falls from a tassel represents millions of individual, nearly microscopic, spherical, yellowish- or whitish translucent pollen grains. Estimates of the total number of pollen grains produced per tassel range from 2 to 25 million.

Each pollen grain contains the male genetic material necessary for fertilizing the ovary of one potential kernel.

The outer membrane of a pollen grain is very thin. Once dispersed into the atmosphere, pollen grains remain viable for only a few minutes before they desiccate. Yet, with only a 15 mph wind, pollen grains can travel as far as 1/2 mile within those couple of minutes.

All of the pollen from a single anther may be released in as little as three minutes. All the anthers on an individual tassel may take as long as seven days to finish shedding pollen, although the greatest volume of pollen is typically shed during the second and third day of anther emergence.

Because of natural field variability in plant development, a whole field may take as long as 14 days to complete pollen shed.

Peak pollen shed usually occurs in mid-morning. Some research indicates that pollen shed decreases after temperatures surpass 86F. A second “flush” of pollen often occurs in late afternoon or evening as temperatures cool. Pollen shed may occur throughout most of the day under relatively cool, cloudy conditions.

Weather conditions influence pollen shed. If the anthers are wet, the pores will not open and pollen will not be released. Thus, on an average Indiana summer morning following a heavy evening dew, pollen shed will not begin until the dew dries and the anther pores open.

First of all, corn pollen does not mature or shed all at once. Pollen maturity and shed occur over several days and up to two weeks. Therefore, a day or two of extreme heat usually does not affect the entire pollen supply. More importantly, the majority of daily pollen shed occurs in the morning hours when air temperature is much more moderate.

Plenty Of Room In The Shed For Pull-Type Sprayers

Light Shed On Management Of SCN